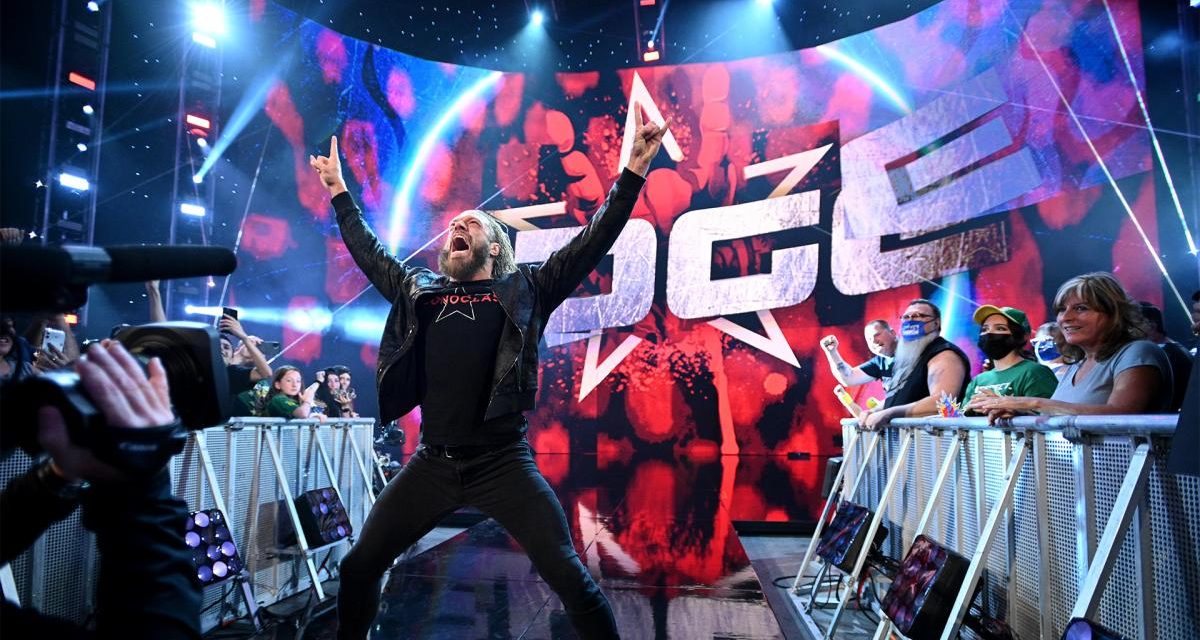 Featuring an appearance by Edge, this August 20th episode SmackDown hosts a face to face meeting between Roman Reigns and John Cena ahead of their match at SummerSlam!

Edge kicks off the show by addressing Seth Rollins’ words last week. He acknowledges what getting hit with the Curbstomp would do to his neck and way of life, but he also warns Rollins that his words and threats have pushed him into a dark place. The Rated-R Superstar says the place he’s in right now scares him, because it’s hard to get out of. And, he admits, it’s hard to get out of because he kind of likes being there. Edge promises to burn Rollins down at SummerSlam.

Jey uses his power advantage to shove around the smaller Rey to start off the match, but Rey retaliates with a hurricanrana and a series of punches. Jey stops him cold with a brutal uppercut, before locking in a chinlock on Rey. Rey fights out and rains down punches on one half of the tag champs before pulling Jey out of the ring with a hurricanrana. He takes out both Usos with a moonsault before we go to commercial. 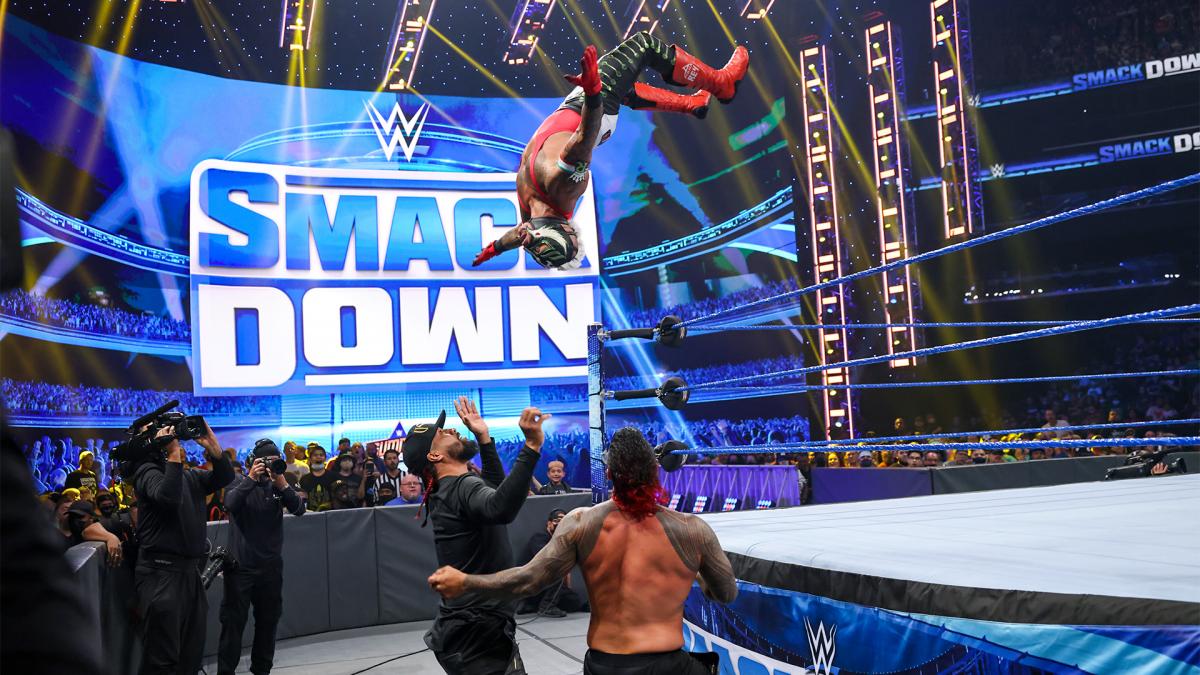 Rey has truly still got it. Photo: WWE

When we come back, Jey has a chinlock on Rey once more. Rey fights out and hits an enziguri, but Jey catches him with a Samoan Drop that stops Rey in his tracks and gets Jey a 2 count. Jey puts Rey up on the top rope and looks for an avalanche Samoan Drop, but Rey escapes and delivers an avalanche hurricanrana for a close 2. Rey delivers a springboard crossbody for 2, but Jey slams Rey into the turnbuckles before delivering a neckbreaker for a 2 count of his own.

Rey scales the ropes and hits the seated senton before delivering a brutal DDT for 2. He rolls Jey up, and Dominik pushes his feet on his dad’s back to assist the pin, but the ref catches it. He tosses Dominik out, and Jey takes advantage of the distraction, slamming Rey into the steel steps. He brings Rey back into the ring and hits the Uso Splash to pick up the win.

Owens rains down punches on Corbin to begin, before slamming him to the mat and delivering a senton. Corbin retaliates by delivering his ring-around-the-ringpost clothesline. Corbin delivers some punches to the gut, but K.O. hits a superkick that knocks Corbin to the outside before hitting a swanton bomb from the apron. Owens looks for the Stunner, but Corbin avoids it and exits the ring. Big E comes out and attacks Corbin, looking to regain his contract, but Corbin slams him into a ringpost and runs away.

Kayla Braxton interviews SmackDown Women’s Champion Bianca Belair, who reflects on what happened last week at the contract signing for her match at SummerSlam against Sasha Banks. She says that it might be a risky move to take on both Zelina Vega and Carmella the night before SummerSlam, but it’s happening no matter what. The champ says that tonight, the fans will see her be the badd-EST woman in WWE.

Shotzi Blackheart and Tegan Nox VS Natalya and Tamina

Tamina starts off the match by hitting Nox with a cheap shot, knocking her off the apron. Blackheart goes right after Tamina, but Tamina is too strong for her, slamming her into her corner and tagging in Natalya, who hits a basement dropkick for 2. Nattie backs Blackheart into a corner and beats her down, before locking in a headlock. Blackheart tries to fight out, but Natalya slams her into the ground before hitting a snap suplex for 2. Shotzi hits a neckbreaker, and knocks Tamina to the ground with a knee. Nox dives onto Tamina with a splash off the apron, and Blackheart rolls up Natalya for the win.

Winners via pinfall: Shotzi and Nox

Seth Rollins comes out to the ring to mock Edge some more. He says that there is no shame in Edge’s shortcomings, saying that without the “darkness in his heart,” Edge isn’t on his level. And, according to Rollins, that part of Edge is dead. The lights turn out, and Edge appears on the screen, with some rather sharp looking canines. He tells Rollins to beware, because the freaks come out at night, and black liquid falls from the ceiling onto Rollins, turning his white suit to a pitch black. 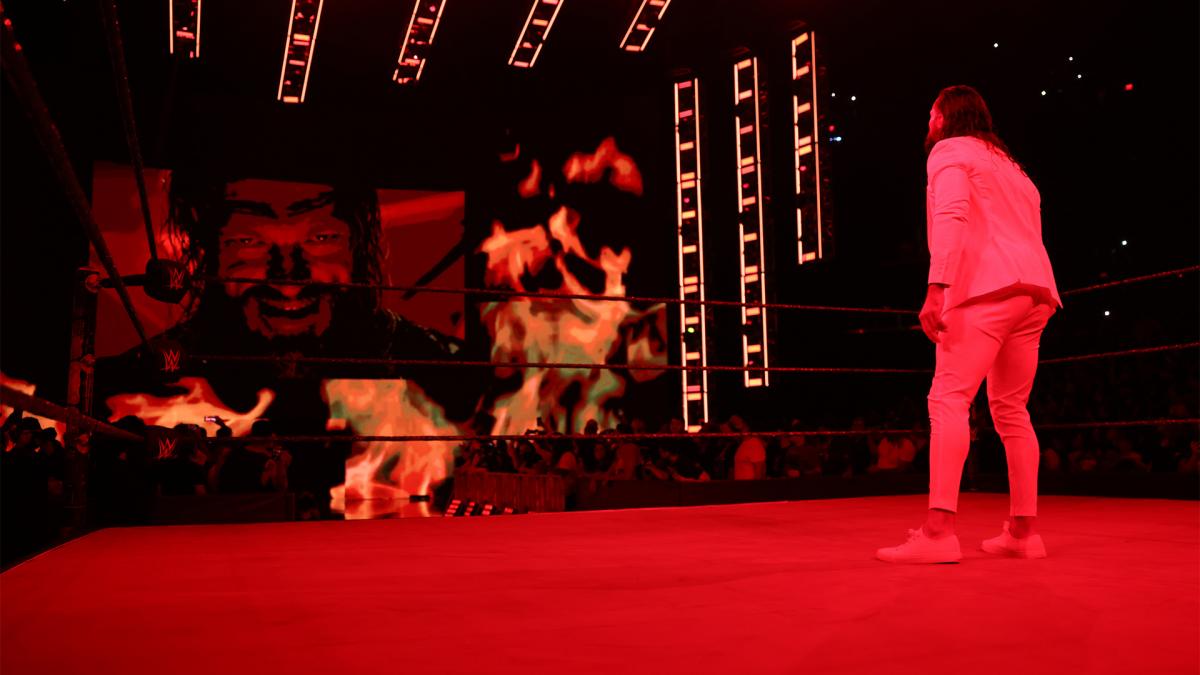 Ford starts off with some slaps and chops, but Otis drops him with a gut punch. Ford hits a brutal clothesline, but Otis acts like it didn’t even happen before dropping Ford with a back elbow. Otis goes right back to the injured ribs with a punch, but Ford fights back with a dropkick and an enziguri. Ford goes to the apron and hits another enziguri, and when Chad tries to interfere, Dawkins shoves him hard into the apron. Ford hits a flying crossbody for 2 before tossing punch after punch at Otis, but Otis stops Ford cold with an axe handle. He delivers a Vader Bomb and Ford stays down for the 3 count.

Boogs starts off against Crews, grabbing the legs of the former Intercontinental Champ and playing him like a guitar. He tosses Crews around, infuriating Apollo, who tosses him into the turnbuckle and hits him with a dropkick for a 2 count. Crews locks in a straightjacket, but Boogs fights out and tosses Crews. Both men tag in their partners, and King Nakamura hits the commander with a series of strikes and a single leg dropkick. Nakamura strikes with a flying knee from the second rope, which gets him a 1 count.

Nakamura looks for the Kinshasa, but Azeez turns it into a sidewalk slam. He tags in Crews, who gets hit with a kick from Nakamura. The King tags in Boogs, who locks in an abdominal stretch. Nakamura takes out Azeez with a sliding knee, and Boogs transitions his submission into a powerslam to get the win.

Vega and Carmella have a tough time deciding who’s taking on Belair first, so Carmella shoves Vega into the ring. Belair runs through Vega with a shoulder tackle before stomping her down in the corner. Carmella distracts Belair, and Vega hits a sunset flip powerbomb for a close 2. Vega looks for a flying hurricanrana, but Belair catches her and hits a powerbomb. The EST grabs Vega and delivers the K.O.D to get the win. 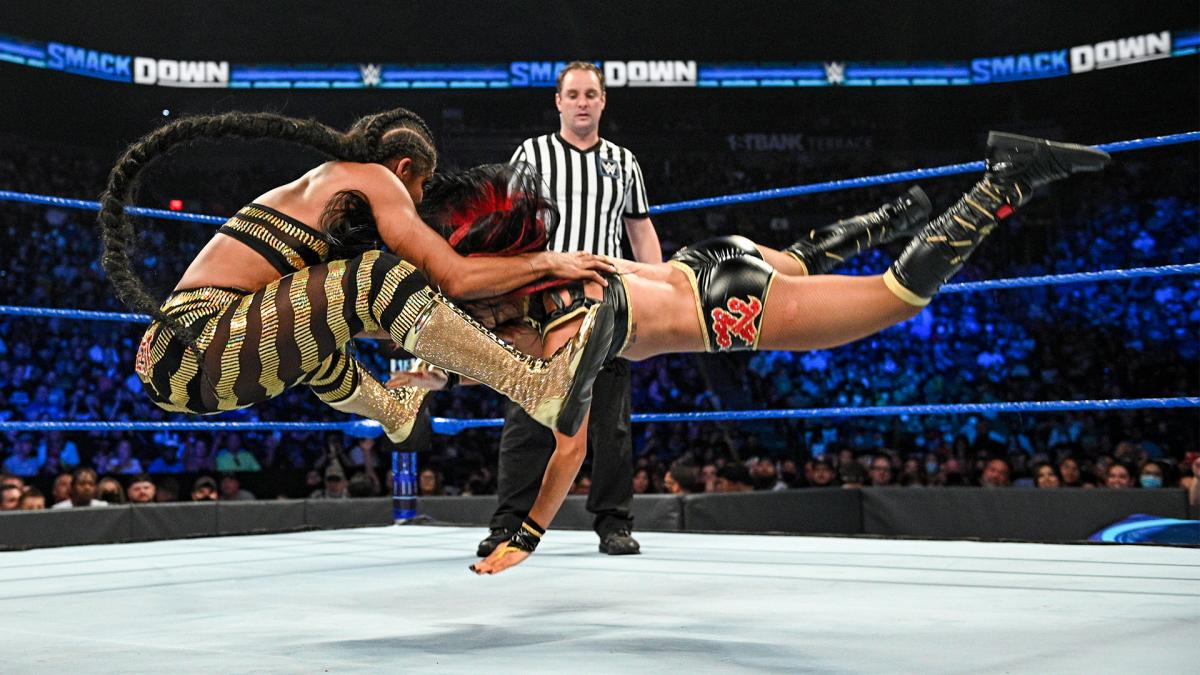 Carmella rocks Belair with two superkicks right after the 3 count on Vega, so Belair starts her second match with a disadvantage. Carmella immediately starts stomping Belair, and she rips her to the floor and pins her for 2. Carmella hits a Bronco Buster for 2 before locking in a headlock. Belair stands up and reverses the headlock into a suplex. The two trade rights and lefts in the ring before Belair catches a superkick attempt, hits a forearm, and delivers a springboard moonsault for 2.

Carmella locks in a headscissors over the ropes before trapping Bianca in the ring apron and hitting a superkick. She pins her for 2, but Belair immediately bounces back and hits a spinebuster followed by the K.O.D to get the win.

Roman Reigns and John Cena make their entrances to address each other ahead of SummerSlam. Roman says that Cena said a lot of stupid stuff last week, but he said it with energy, and that’s why the crowd loved it. Paul reminds everyone that nobody has beat “this” Roman Reigns, and that’s when Cena decides to step in. Cena says that Roman has no idea what he’s in for tomorrow. Cena assumes that Roman thinks Cena’s going to lose because he’s just a movie star, but Cena promises to win the title and then go do another movie. He says that all Roman has to do is make one mistake or get distracted, and Cena will Never Give Up and get that 3 count. 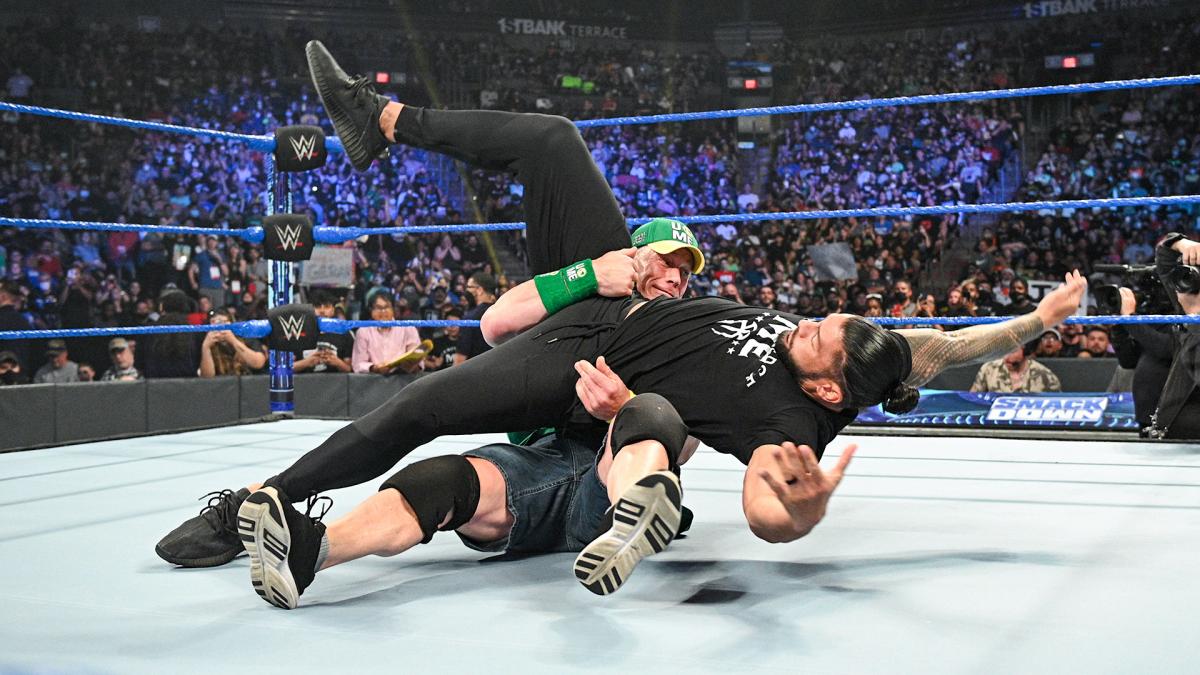 Roman asks Cena what makes him any better than any of the people that Roman’s destroyed before. Roman decides to raise the stakes: if Roman loses at SummerSlam, he leaves the WWE. He and Cena shake on it, and Roman tries for a Samoan Drop, but Cena reverses it and rolls Roman up. The crowd counts “1, 2, 3,” and Cena bolts out of the ring. That’s all that needs to happen at SummerSlam for Roman Reigns to leave the WWE forever.

A perfectly alright go home show for SummerSlam, Cena’s promo was once again very convincing. I’ve given it an extra .5 for the cool Edge segment. I love when they do cool things like that just because they can.