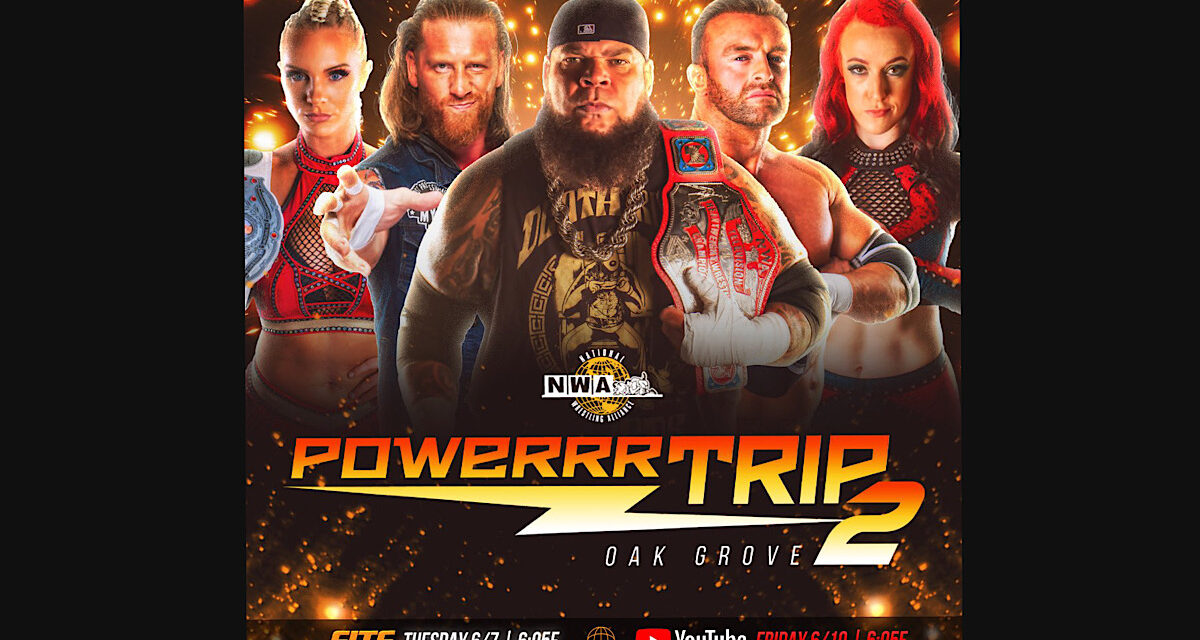 The National Wrestling Alliance is on The Road to the Alwayz Ready pay-per-view, and it concludes with the final night of PowerrrTrip2.  Brian Myers takes on Nick Aldis to soften him up for Matt Cardona, and in the women’s competition, there is a tag match where KiLynn King and Missa Kate will be in action against Kenzie Paige and Kamille is a preview of the women’s title picture.  Also, Tyrus has another Slam Challenge before he puts his NWA Television title up against Big Strong Mims.  So many matches that have the potential to reshape the card heading into the PPV, and we’ll see if anyone will be Alwayz Ready.

The start of the show has Kyle Davis in the ring with the NWA Television champion and New York Time Bestseller, Tyrus, and he gets cheers from the Kentucky crowd.  Before Davis can address the upcoming Slam Challenge, Tyrus apologies(!) to the fans that copies of his new book sold out before he could autograph them all.  He acknowledged one kid wanted a copy of the book, and Tyrus leads Davis to the guardrails and there’s little Chesley Crick(?).  He offers to give him a copy of his signed book…for $1000. Chelsey gives an empty hand, and Tyrus says no book for the brat.

But, Tyrus says, enough of the puny humans.  He’s here for one reason (other than getting fools to purchase his book) and that’s to get a Slam Challenge.  Before Davis can protest that Tyrus lost the Slam Challenge to Mims, Tyrus says he issued an open challenge, and a guy related to Andre the Giant who’s a seven-time powerlifter champion took up the offer.  Tyrus says if he can do it, then he will become the NWA Television champion.  Even I’m curious to see who’s stepping up to face the Man-ster.

But we are at Valor Hall in Oak Grove Kentucky, KY.  Joe Galli, Tim Storm, and (sigh) Austin Idol have the call.  As Idol blusters on like a politician on a filibuster, Galli smartly talks over Idol to get to the First Match of the night… 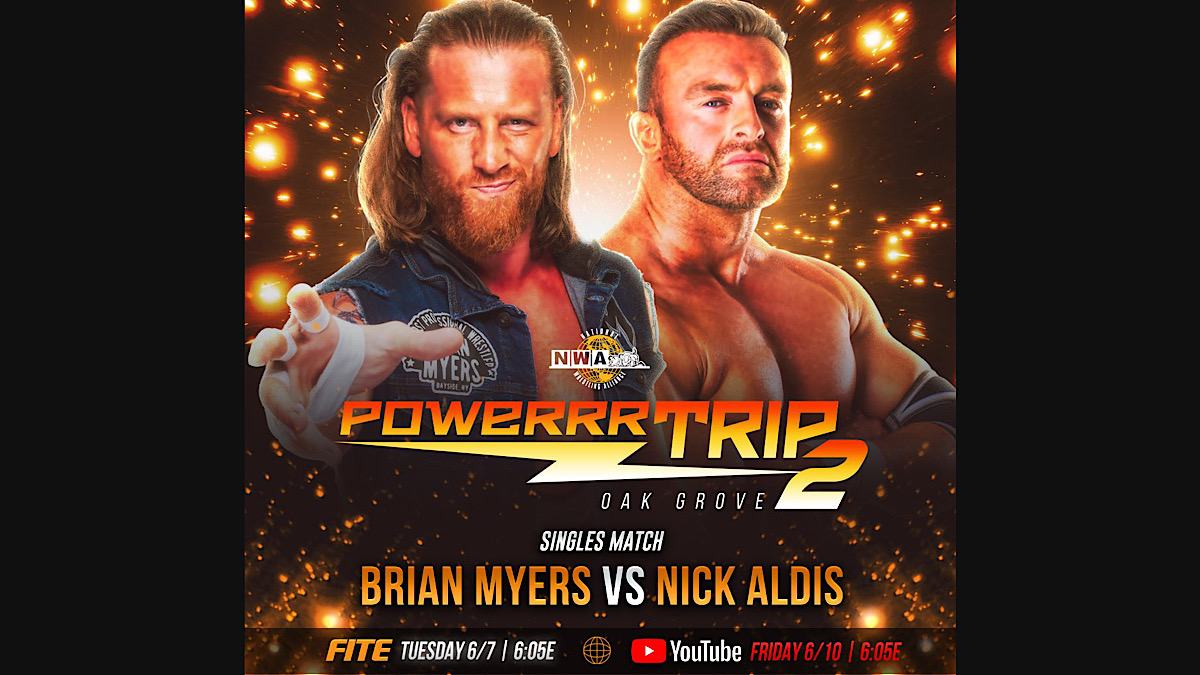 “The National Treasure” Nick Aldis vs. “The Most Professional Wrestler” Brian Myers

(Author’s Note:  I guess “The Most Professional Wrestler” seems to be a better moniker, because “Bob Kapur’s Favorite Wrestler™” would get me sued, and my attorney can only defend so much of my nonsense.)

As Aldis comes out from behind the curtain, Myers starts swinging away before he could get his ring jacket off, and the bell has not rung.  Aldis manages to get the better of Cardona’s pal as he hip tosses him on the entrance ramp and fans are solidly behind The Dealer.

Back in the ring, the bell now rings to signal the start of the match and Aldis is on fire, but it isn’t long before Myers gets back in control with stomps and a suplex to the former NWA champion.  Aldis goes for body shots to Myers in the corner, and he sends him to the ropes, but Myers can trip up Aldis and sends him outside to cause more damage.  Myers gets him back in the ring in a sleeper hold and this leads to…

I do not like ads in the middle of a match.

I do not like it when my investment in a match gets snatched.

I do not like the position you put me in, man.  So go back to the match now, Sam I Am!)

Back to the match, Myers has Aldis locked in a sleeper hold.  He looks like he’s fading, but Aldis fights through to a vertical base.   Myers manages to send Aldis out of the ring and rams his back into the ring apron.  The action goes back and forth until Aldis gets a back elbow and a Michinoku Driver for a two count.  Myers counters with a thumb to the eye and a spear to get a two count.  Aldis comes back with a tombstone piledriver for another two count.  Aldis climbs up top, but Myers shoves the ref into the ropes to trip him up.  As Aldis lays prone on the top turnbuckle, he goes for a superplex but is blocked and sent down to the mat, and Aldis with an elbow drop for another two count.  As Aldis and Myers jockey for position, Myers distracts the ref for a mule kick to the…err, inner Dealers, and then gets a huge forearm for another two count, and Myers ain’t happy with the ref’s count.  Myers hits the ropes, but Aldis trips him up and gets the Kingslayer cloverleaf.  It’s academic as Myers quickly taps out.

Your Winner via Submission:  Nick Adis

Kyle Davis gets in the ring to find out What’s Causing Aldis©.  The Dealer’s thoughts are he’s taken the high road for too long.  Now he’s willing to do whatever it takes, and Aldis assures fans that he can take the low road.  He promises at Alwayz Ready to take back the Ten Pounds of Gold.  During the match, there was a message via Twitter from the NWA Champion on his status for the PPV, and I’mma leave it riiiiiiight here….

I’m out of surgery. The comeback begins now! I already ordered my leather jacket and denim vest. #StillHere #AlwayzReady pic.twitter.com/RLxmurtiah

There’s a recap of the latest NWA USA but really, you’d be cooler if were to catch it here.

Now is the time on Sprockets when we…oh, wait.  Wrong program. 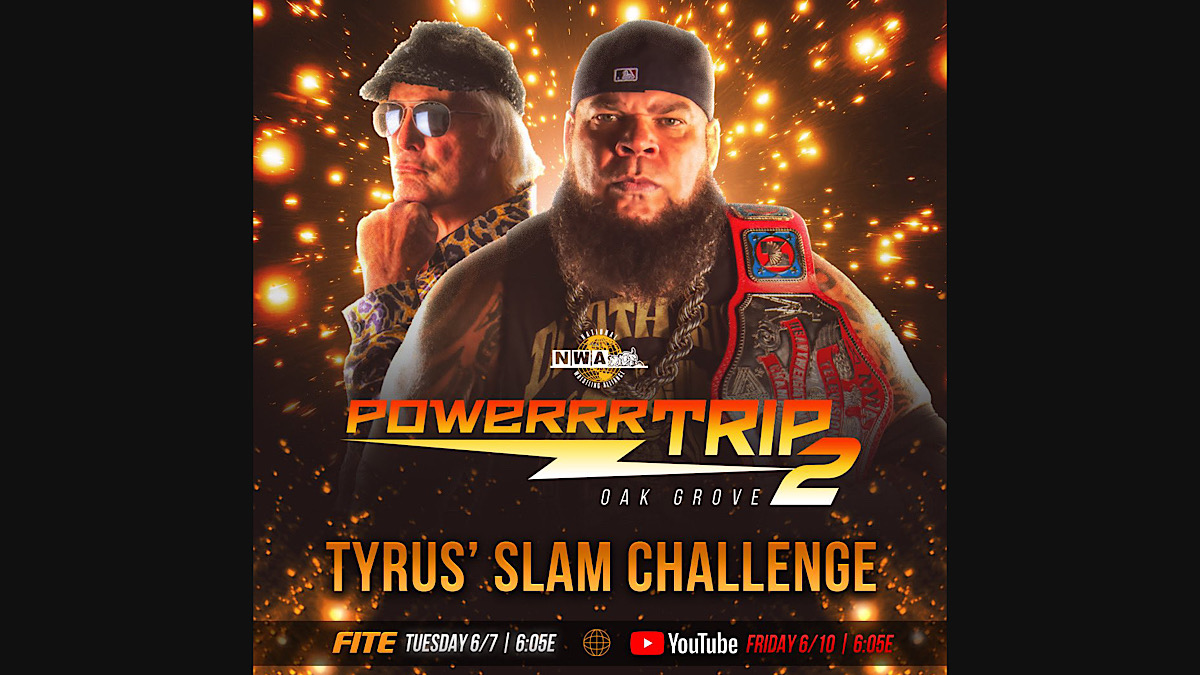 and the person answering the challenge is…

KC Roxx…no, really?  Hoo-kay, folks.  You know the drill:  You buy the bit, you buy the premise

Anyway, Roxx goes to Tyrus at a sopping wet 150 pounds and tries to lift the big man once but gets shoved off.  Roxx gets some pushups in for the second try, and that is a big goose egg for the challenger.  The third time Roxx goes for broke, and he swings for the…err, inner Man-sters and Tyrus doubles over as Roxx goes on offense.  But a huge heart punch doubles over Roxx and he’s in the corner.  As Tyrus climbs for a possible Vader Bomb (or is it Tyrus Bomb), Big Strong Mims appears and gets in the Television champion’s face.  He’s able to overtake Tyrus, but before Mims can cause more damage, Tyrus gets a DDT to his arm and tries to work it out of its socket.  Now, Cyon is in the ring stepping up to Tyrus…and then works over Mims.  At that point, Idol leaves commentary to direct traffic in the ring, and Tyrus gets a heart punch to Mims.  As the challenger lays hurt, Cyon and “father” Idol hug it out.

(Author’s Nerd Rant:  I’ve tried to explain in the past the hopes and disappointment of how the Star Wars prequels meant to me when I was younger, and I was left with blank stares.   This segment encapsulates everything I felt at that time.  So, Thanks Idol, I suppose.)

It’s now time for the Main Event, and it’s tag team action with… 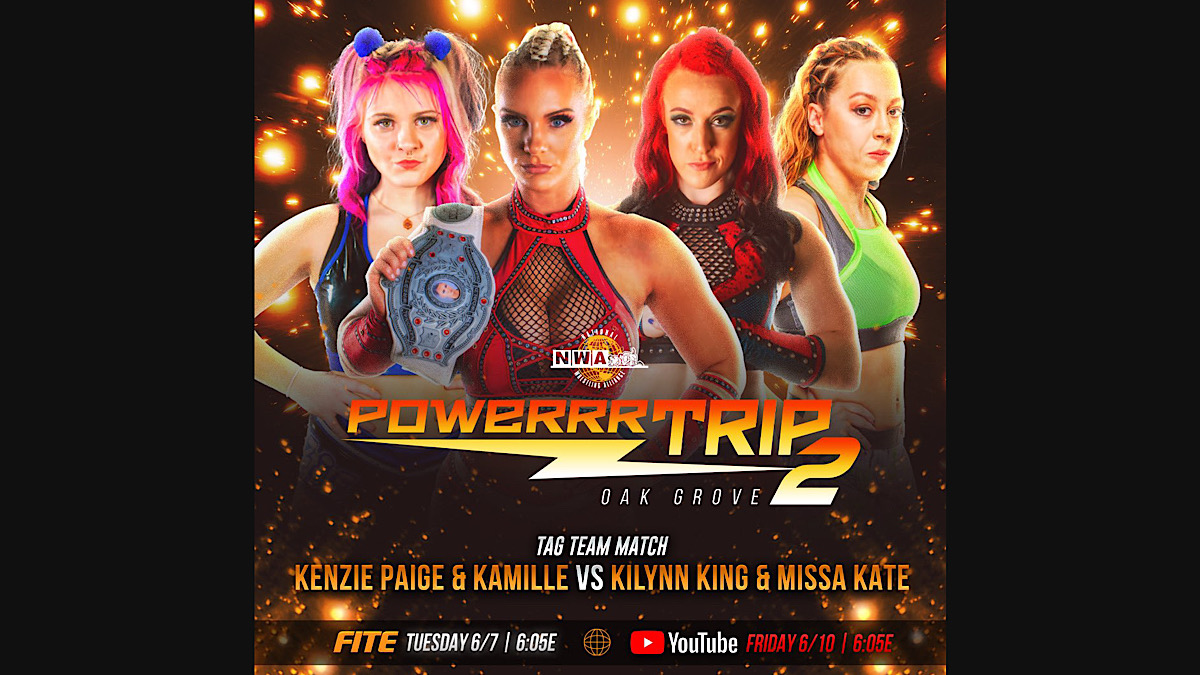 As Idol kept talking about Cyon while the women entered the ring, I tuned him out and focused on the odd pairing of the tag team that entered the ring.  It was almost WWE-esque in its booking if you will.

The bell ring and Kate and Paige start, and fans in Kentucky are solidly behind the Pretty Empowered one.  Kate, with her odd ring gear/airbrushed sweatpants, tries to overtake the fan favorite, and Paige pants-ed Kate, and that distraction keeps her firmly in control.  A tag to Kamille and The Brickhouse is all business with a body slam.  Kate manages a tag to King and it looks like we’ll get a preview of their Alwayz Ready championship match.  As King hits the ropes, Kate tags back in and it’s back to the ass-kicking she got from Kamille and Paige.

Kate claws at Paige’s eyes and hot shots her on the neck on the top ropes and Paige is in Peril.  Kate goes to her corner and King forcefully tags in and continues to work over Paige.  As she wears down Paige, King goes back to Kate and things look bleak when both work her in the corner into rotating foot stomps in the corner.  King delivers a message with a roundhouse kick to Paige that knocks her silly.  King keeps up the offense until Paige hits with a desperation codebreaker.  She crawls to her corner and manages to get the hot tag and Kamille is a Brick…House.  She’s mighty mighty and she let Kate know what it’s about (apologies to The Commodores).  The match starts breaking down and Paige and King duke it out and she gets a Kenzie Kutter to King for a close two count as Kate shoves her off.  Kamille gets a jumping leg lariat to King, and she gets her set up for a double team move, but King evades, and Paige accidentally kicks Kamille in the mush.   King gets a (badly executed) Excali-buster on Paige to cover for the one, two, and three.

Your Winners via Pinfall:  KiLynn King and Missa Kate

As the ref gets The Burke to Kamille, King holds it for a minute, and she now has all the momentum heading to the PPV as the show rolls to credits.

Nothing too shocking, but lots of intrigue leading into the PPV.  Aldis prevailing over Myers was not a surprise, but Cardona’s injury adds all sorts of question marks.  Mims getting injured before his NWA Television titlew match with Tyrus can go in either direction  of “overcoming the odds” or “hurt too bad to overcome Tyrus”  King is the best part of thye women’s title scene, and that is a subject I will discuss later this week.

For now, see you next Saturday for the pay-per-view!