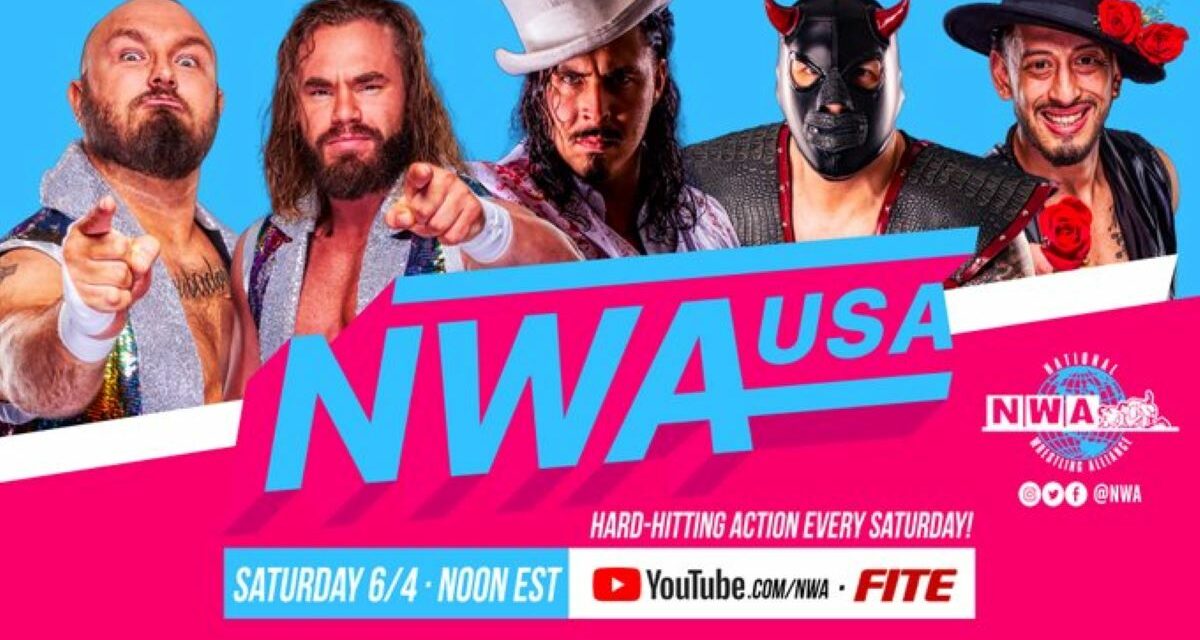 In the season two finale of NWA USA, this show has a huge main event where “Magic” Jake Dumas wants to avenge his tag team loss against Gaagz The Gymp.  The only way to do that is in a No-Disqualification match, and there is dark magic a-brewing.

Speaking of which, Kyle Davis is backstage with “Magic” Jake Dumas about the upcoming match.  Dumas states he understands gimps, and all they want is pain.  Well, he promises Gaagz that he’ll give some pain, but Dumas makes it clear that he will never feel the pain quite like the Magic Show.

As for me, It’s more entertaining than a Criss Angel show.

We’re at the Valor Hall in Oak Grove, KY.  Joe Galli, Tim Storm, and Madusa have the call, and there is friendly banter between the two Co-Managing Directors of the NWA.  But we need to head to the ring for the First Match of the night between…

This is the second appearance for Aguilar, but Andrews is billed as coming from Sacramento, and Galli mentions his time in RCW.  There is a distinct size and power advantage for Andrews, but Aguliar manages to evade the charging bull Andrews and then goes aerial against the “Adorable” one, but it’s not long before Andrews choke slams him with authority.  He even channels his inner Rick Rude and Andrews gets a neckbreaker to cover for a two count.  Aguilar fires back with chops, but Andrews gets a huge clothesline for another two count.  Aguilar gets back on offense and nails a flatliner but gets a close two count.  He tries to take down the big man with a more high-risk aerial offense, but Andrews manages to get him on his shoulder for a powerslam, and the Latin Lover loses this match.

Now for a huge deal of a tag team match, it’s time for …

This is the first time pairing of Graves and Diante, and the Ill-Begotten enter with Dealz obnoxiously getting in Madusa’s face about something Japanese.  Not sure if it had something to do with Bull Nakano, but you know Madusa ain’t having any of that.

Plunkett starts against Graves, but Taylor wants in, and he obliges his tag partner.  It proves to be an ill-advised move for the Ill-begotten member, as Graves easily overpowers Taylor, and the big man takes his time putting the hurt on him.  Then Plunkett and Diante tag in, and the former MMA fighter strikes the Tater Peeler, who struts a la Flair and returns the receipt and slaps the taste out of his mouth.  Diante is isolated in the Ill-Begotten corner, and things are not looking good for him, but a hot tag to Graves and he is Ruff and Ready against Plunkett and Taylor.  He goes into the Dusty Rhodes playbook and jabs away but then gets a big splash to Plunkett to knock the wind out of him.  Taylor comes back in the ring with a crossbody and manages to successfully pick up Graves in a fireman’s carry, but Diante knocks his block off.  At that point, Dealz goes to commentary to annoy Madusa some more, and she promptly slaps him.  Dealz is rocked and he goes into the ring to complain to the referee.  As the ref deals with…err, Dealz’ deal, The Ill-Begotten use the distraction to send Graves out and they deliver an enzugiri/flatliner combo finisher to Diante for the win.

Your Winner via Pinfall:  The Ill-Begotten

After the match, Madusa is still livid that Dealz got in her grille like he did.  I fear for Danny Dealz at this point.

Kyle Davis is backstage, this time with Bob Kapur’s Favorite Wrestler ™, Brian Myers.  Myers states that even though he’s coming from another company and the polite thing to do is to keep a low profile, but he’s here to fight Nick Aldis at the Alwayz Ready pay-per-view.  Myers says he made it personal by going up against his running buddy, Matt Cardona, and he knows the only thing Aldis cares about is the Ten Pounds of Gold.  He promises after their match next Saturday, that he is never going to hold the title and Myers is here to ensure he never will.  Strong words for the former champ, and I’m curious what the latest member of Team Cardona will add to the mix.

But Let’s Get Gymp-y as we go to the Main Event, and it’s a…

Dumas enters with a blood-stained jacket as part of his ring gear.  As for the fans, the people are on board with Gymp-a-Mania™.  As the bell rings, Mitchell tells him to show the tongue, and as Gaagz goers to his mask, he tries to unzip but…something is in there.  Next thing you know, he pulls out a card from his mouthpiece, and Dumas shows it as the Ace of Spades.

(Author’s Note:  Again, I will state this emphatically, and will die on this hill:  This is more entertaining than a Criss Angel magic show.)

Anyway, that’s enough magic as Gaagz goes after Dumas, but he has him by the tongue and he slices it with the same card. Ta-da.  Dumas sends him out of the ring and chops away at Gaagz.  Now the violence starts to ramp up as Dumas gets a steel chair and some steel cookie trays, but Gaagz tries to stop that.  Unfortunately, he gets slammed to the ring apron and Dumas follows by slamming the tin on top of his head.  Gaagz is reeling and then Dumas swings at the chair and misses, hitting the ring post instead.  Dumas’ hands are hurting from that sting, and Gaagz uses the opportunity to claw at his face.  Again, Gymp-A-Mania™ is running wild in Valor Hall.

Back in the ring, he works Dumas with the cookie tray, and then Gaagz set his head on a chair seat and goes for a senton.  Dumas dodges and Gymp gets the whole chair for his trouble.  He delivers the Abracadabra finisher, and covers for the one, two…Gaagz kicks out at the last second.  Dumas goes up top, but Gaagz sends him back down to the mat.  Dumas sets him up in the electric chair, but he unzips the mask, and the tongue comes out, and he claws at his eyes.  Blinded, Dumas goes to the ropes and Mitchell clocks him with a tray. Gaagz delivers Sliced Bread #2 (or a Gymp Drop™) and covers for the one, two, and three.

The fans are happy that Gymp-A-Mania™ lives on in the NWA as the show goes to credits.

For anyone trying to figure out this show, and the main event; don’t try.  Instead, take the mantra of Mystery Science Theatre 3000 and, “Repeat to yourself its just a show/I should really just relax.”  The matches on the show were solid overall, and the new talent hint at the possibilities of what the NWA has in store for the future.

As for Gaagz, well I say Gymp-A-Mania™ is running wild in the NWA (I do ask for the T-Shirt royalties, though).  If you think it’s dumb, there are some of you that still cheer for Danhausen, so shut it.

NWA USA is off next week because of the PPV, so see you on Saturday and be sure that you’re Alwayz Ready!