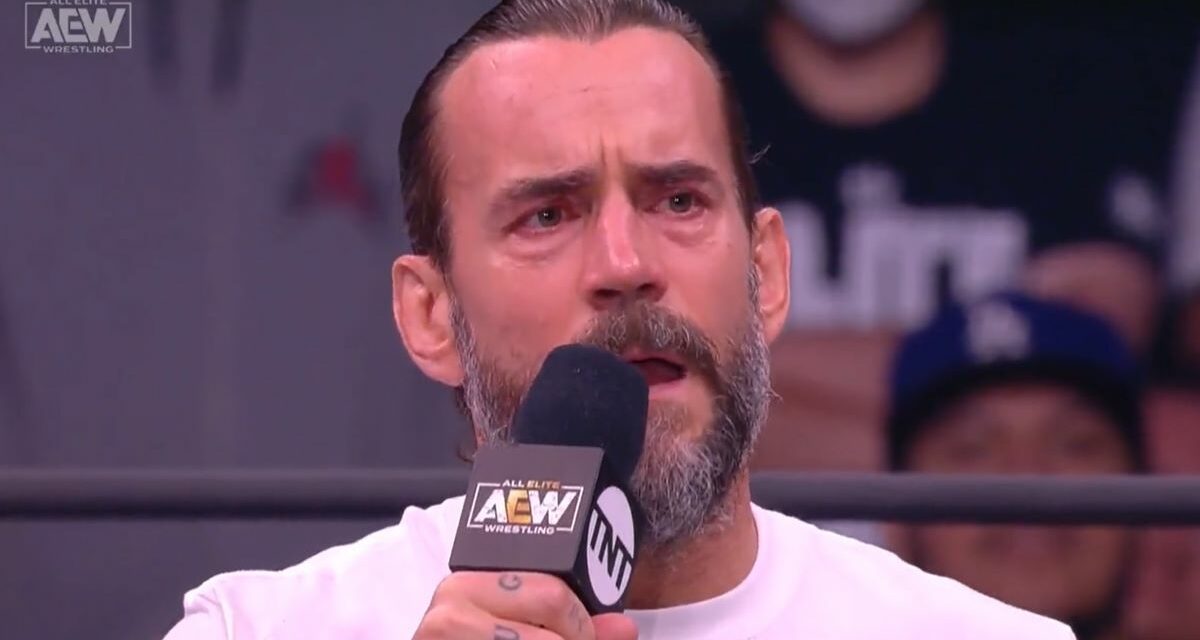 It’s Friday Night, and you know what that means?  No, not another MJF Pipe Bomb, although CM Punk will be in attendance to talk to the fans, and you know he has no shortage of words.  It’s AEW Rampage, and between Punk’s upcoming announcement and a TNT Title match with Scorpio Sky and Dante Martin, we have a stacked card ahead of us, so there’s no time to waste.

We come to you from the Toyota Arena in Ontario, CA.  Excalibur, Taz, Chris Jericho, and Adam Cole have the call (BayBay), so let’s get to the First Match of the night and it’s… 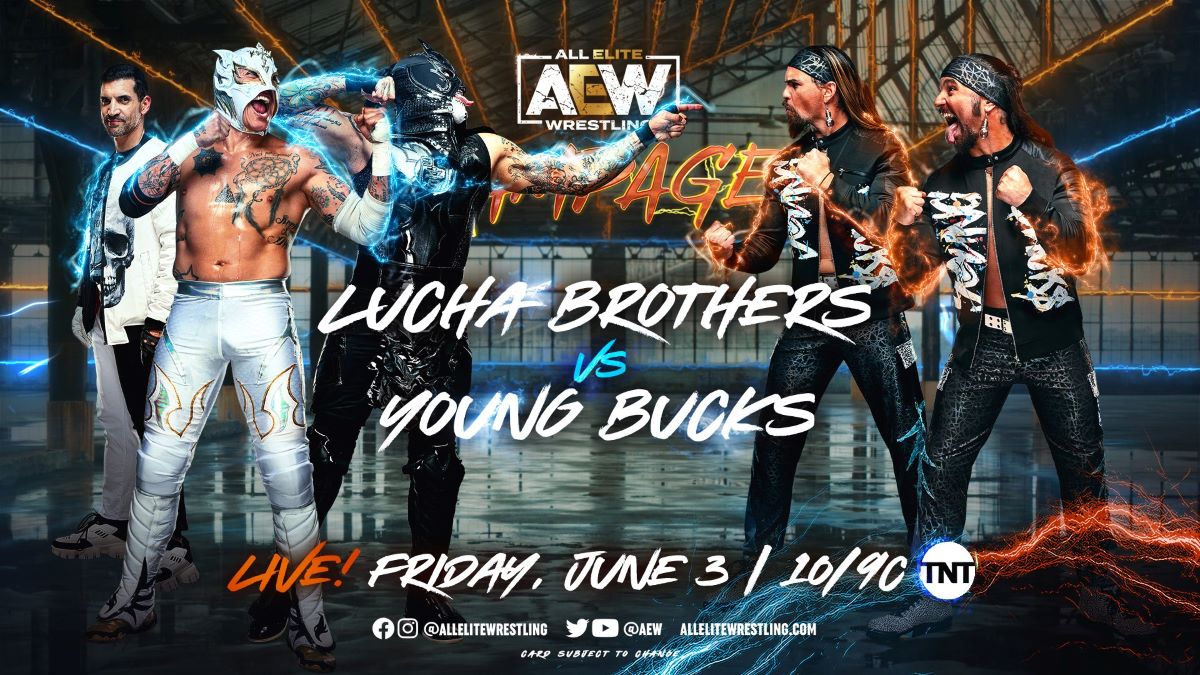 The Young Bucks (Matt and Nick Jackson) vs The Lucha Bros (Rey Fenix and Penta Oscuro, with Abraham Abrahantes)

This is the latest matchup, and the fans are already becoming unglued.  The early part had Penta and Matt hit dueling “Cero Miedo/Too Sweet” hand gestures before Penta takes off the glove and throws it at him.  Penta goes for an arm breaker, but Matt gets out quickly, and now Nick and Fenix are in, and fans are enjoying the flips, flops and flying, as both men have each other well scouted.  There’s a handshake of respect by Nick that Fenix accepts, and Matt blindsides the Lucha Bro, leading to the Bucks going on a double team tandem tear, but soon the match gets lucha-rific as Penta hits a tope con gilo and Fénix with a tornillo on the Bucks to the outside, and he nails a cutter to Matt on the floor outside the ring.

Back in the ring, Fenix attempts a splash and Matt gets knees up to hit the solar plexus.  During Picture in Picture, Jurassic Express and The Hardy’s are in the audience at ringside getting in the Bucks grill as well as scouting the competition.  Penta isolates Nick, but this Young Buck is able to counter the Lucha Bros offense.  Tag to Matt who gets Fénix in the rotating northern lights suplex, before getting both brothers in a double northern lights.  But soon the match favors Fenix and he channels Eddie Guererro and lands a frog splash to Matt that gets a two count.  Then the Bros attempt a Doomsday Superplex but Nick dropkicks Fenix in the mush that flips him and his brother into a poison ‘rana, and Matt uses the space to land with a big elbow on Fenix to cover for a two count.

The Lucha Bros go back on the attack to Nick, and as he is lying prone in the center, Fenix gets on Penta’s shoulders and they balance for a splash to a cover, and as Matt rushes Penta catches him in the Mexican Destroyer.  Ref is in position, but Fenix gets a two count.  From there, it’s a Superkick Party, and they attempt the BTE Trigger, but Fenix dodges and goes for a crossbody, and the Young Bucks nail the Meltzer Driver for another two count.  Penta gets in their face, and Nick unmasks Penta before hitting a Superkick Party for him, and now the BTE Trigger finds the mark on Fénix and that’s all she wrote.

Before we can digest that, here’s another match with…

Ricky Starks and Powerhouse Hobbs vs. Some Jobbers

Honestly before I could do a haiku or find a good squash recipe, the match is over and…

Your Winners via Pinfall:  Ricky Starks and Powerhouse Hobbs

Only question I have:  Where in the name of AEW DARK Elevation is this match doing on Rampage? Oh well.

Let’s get to a match with some more intrigue, and that is… 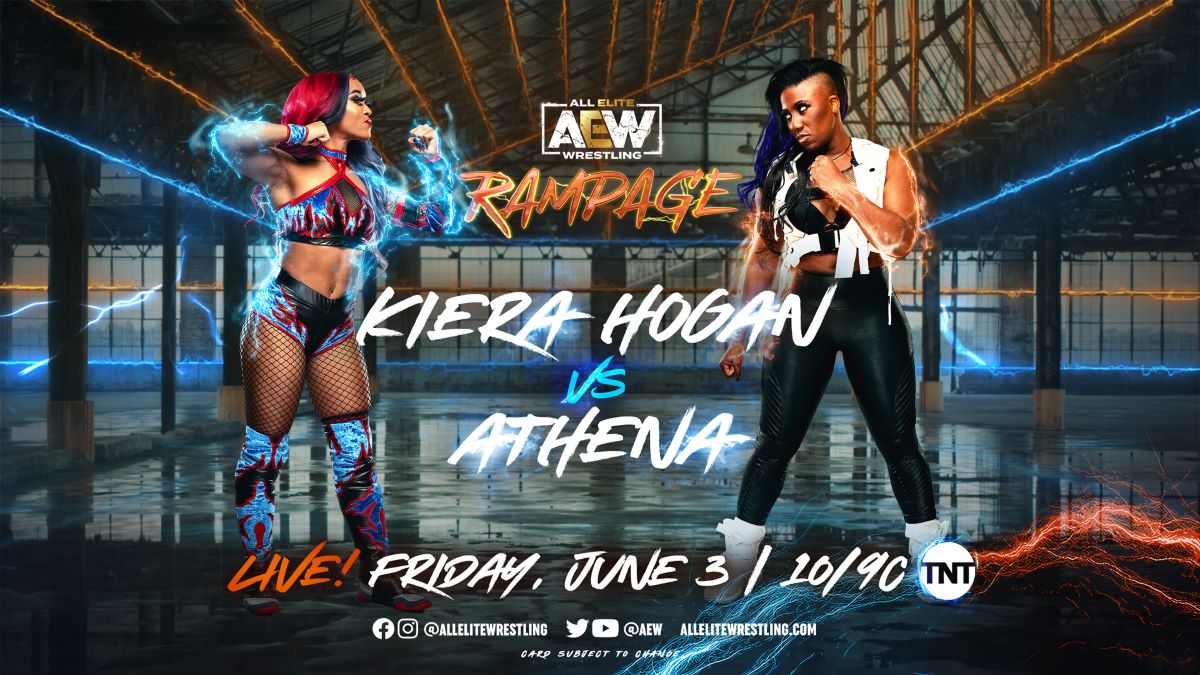 Stokely Carmichael promises during a taped promo that Athena will get an ass whipping courtesy of this Baddie.  If nothing else, Cargill really traded up from Sterling.

As for the artist formerly known as “Ember Moon”, Athena is able to show up this Baddie, and Hogan backs out for some advice from Carmichael.  Athena uses the opportunity to fake out a dive to Hogan, and then she gets a delayed diving elbow strike to her on the outside.  Athena attempts a slingshot move, but Velvet takes her legs out from under her.  Hogan benefits from the distraction and she works over the Fallen Goddess during Picture in Picture to the delight of the Baddie a section and then…

Ads (I’m too tired to properly bitch and moan about it, so it gets a pass tonight)

Back in the ring, Athena hits with an explosive running dropkick and then a front handspring elbow to the corner, but Hogan returns back with a running boot slide to stack her up to cover for a two count.  However, Athena delivers with the twisting stunner that gets the pin and the win to (ahem) Eclipse this Baddie.

Your Winner via Pinfall:  Athena

After the match, she gestures at the TBS champ and Cargill ain’t feeling it, but you can tell she is now living rent-free in her head.

The House of Black inductee a new member in Julia Hart.  Simply put, the house always wins, and I’m too tired to give this any more snark than needed.

It’s now time for the AEW World Champion, CM Punk, and the champ seems a little downcast and it’s hard to tell but also appears to be coming up lame walking to the ring.  As the fans chant his name, the camera zooms in to what appears to be tears in his eyes and the short version is this:  Punk is injured, and he has to require surgery.  Therefore, he is not relinquishing the AEW title, but he advised Tony Khan to get an interim champion while he’s away.  At one point, Punk wipes the tears from his eyes ad goes on to say to the crowd, “Tony told me that he believes in CM Punk and he believes this is just a bump in the road, and I’m going to tell you, god dammit, I needed to hear that because sometimes I get a little down on myself. And then doubt creeps in, and then doubt can ruin anything but standing here in front of you… I’m gonna promise you one thing. I’m not going to let that doubt creep in. I’m not going to let it ruin anything and to get back is gonna be bigger than the setback.”

With that the interim champion will be decided at the Forbidden Door pay-per-view.  Oh, and for all of you wondering what was gonna top MJF’s pipe bomb on Dynamite?  Well, be careful what you wish for.

Mark Henry is backstage with Dante Martin and Matt Sydal, as well as Dan Lambert and Men of the Year.  Martin says he thinks he’s better than Scorpio Sky and he now knows it since Sydal will have his back in the corner.  Sky says he talks a big game, but can he back it up?  Sky himself can’t wait to kick his teeth in.

Well, says Henry, there’s been enough talk.  It’s time for the Main Event, and it’s for the… 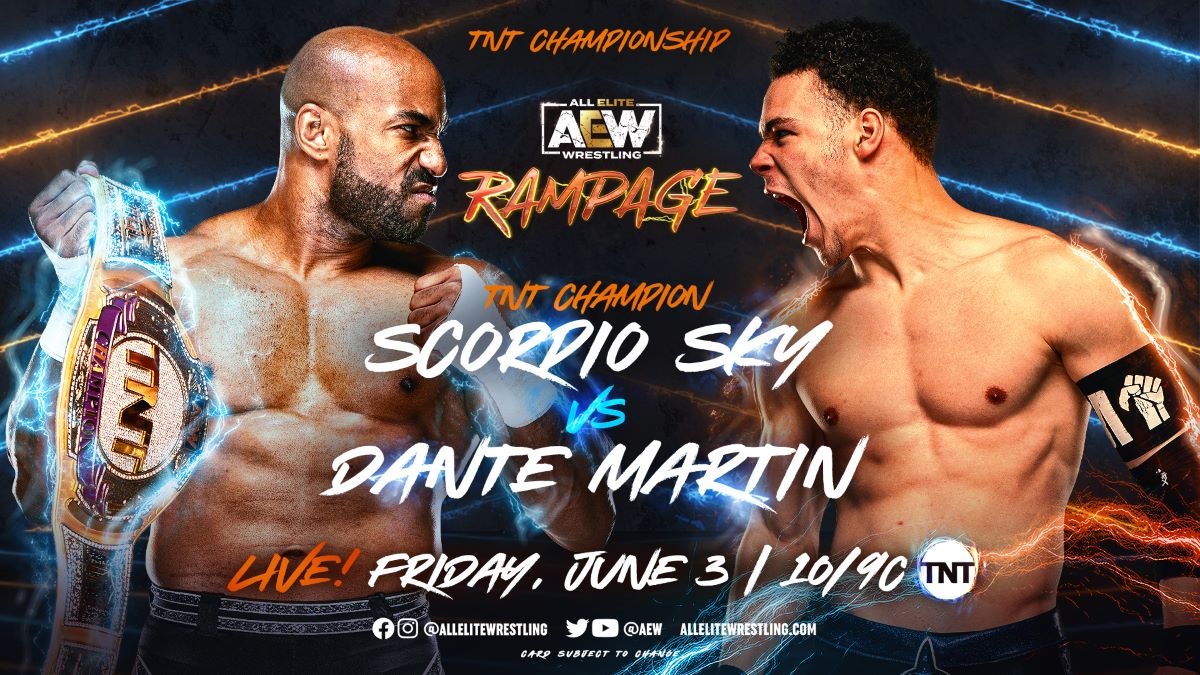 As the bell rings, Sky sticks and moves against Martin, and he looks like his size is able to keep the Top Flight member grounded and show up the youngster, but Martin has flashes of offense and is able to out flip Sky.  During Pictures in Picture, Sky quits screwing around and goes to work on the outside, slamming Martin to the ring apron.  He sends the challenger back in the ring and starts to work the heavy bag that is Martin.  Martin comes back with a huge slap, but Sky takes the upstart to school.

Both men start exchanging blows.  Sky rushes at him, but Martin leaps over and sends Sky crashing to the outside.  He uses the ropes for a springboard splash that finds the mark on Sky, and he sends him back in the ring and nails a shotgun dropkick from up top.  He covers Sky and that gets Martin a two count.  Lambert get up on the ring to yell at the referee.  As the ref deals with his nonsense, Page grabs Martin’s ankles to prevent more aerial assaults, but Sydal nails him with a knee drop.  Now Martin gets back in and delivers a TKO to Sky.  He covers as the ref counts for one, two…no such luck.  Martin goes for a crossbody and over rotates as Sky cover for a two count.  Martin really gets some height as he hits a huge double stomp to cover for another two count.  However, Sky shows Martin how it’s done as he delivers the TKO with authority as the ref counts the one, two, and three.

Sky celebrates another successful title defense as the show fades to black.

Really, the talk of the show is CM Punk’s announcement, which overshadows everything that happened on tonight’s episode.  All the other matches were good, but it gets lost in the mix after nthat announcement.  How this shapes all future episodes will be worth watching, especially as Forbidden door is less than three weeks away.

For now, see ya next Friday!