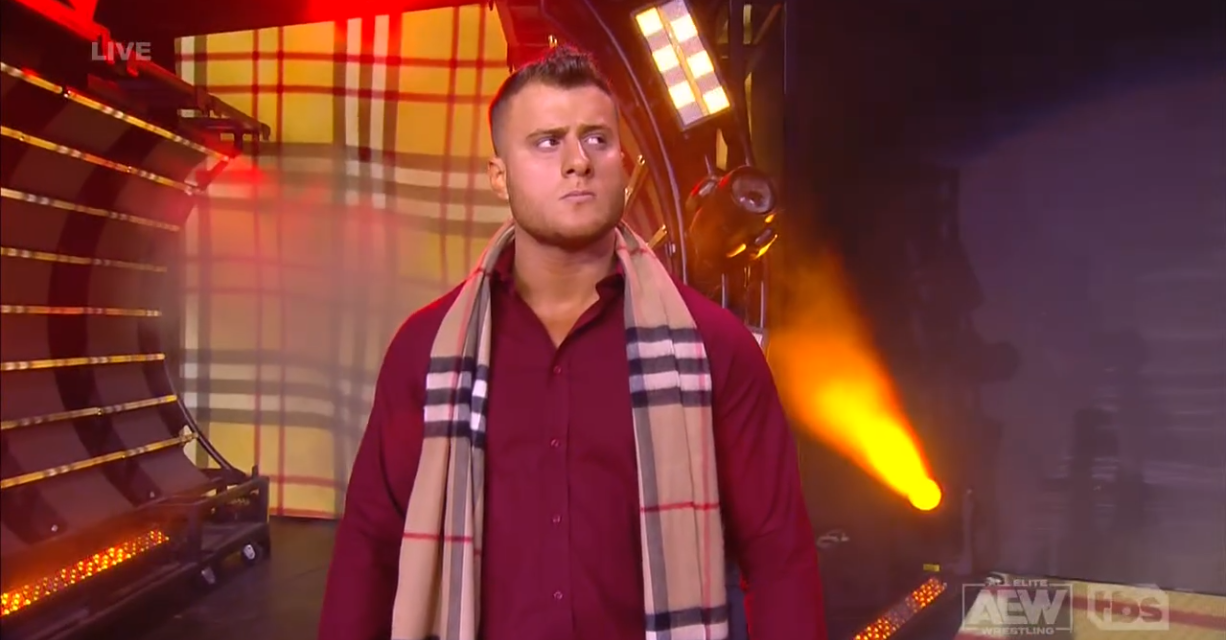 Normally we would have to wait several months for another AEW pay per view, but not this year. Coming off an exciting, if not long, Double or Nothing, AEWxNJPW Forbidden Door is less than four weeks away. Dynamite specializes in long term storytelling, but there are going to have to ramp things up this month. Let’s get right to the action as Dynamite makes it’s debut in Los Angeles.

The new AEW champion leaps into the crowd during his entrance. The Gunn boys not knowing what city they’re in will never not be funny. Unsurprisingly, Punk gets a huge pop tagging in. The champ connects with a cross body on Caster. He is handed off to Wheeler, who power slams him from the top rope. With the ref distracted, Billy  Gunn takes a cheap shot at Harwood in the ropes. Dax wants a tag, but both Punk and Wheeler are yanked off the apron. The Gunn boys team up to hit Dax with a flapjack. Punk finally get s the hot tag. He helps Wheeler elevate over the top to take out Caster on the floor. Punk drops the elbow on Austin. Billy jumps to the apron when Punk calls for the GTS. Austin with a roll up but can’t get the pin. Punk blocks the Famouser and hits the GTS. FTR with the Big Rig and Harwood makes the pin for the three count.

After the match, Punk grabs a microphone and holds up the AEW title. He wants to know who he will be facing at Forbidden Door. He gets his answer; Hiroshi Tanahanshi. Dax Harwood also calls out Dave Finley.

Is something going on with MJF? If somehow you hadn’t heard, there was some doubt if MJF was going to actually show for the Double or Nothing. He did his job, but didn’t say a word. Tonight, though, he has a microphone in hand. He knows the people want to hear him talk, but they are getting Max Friedman. He talks directly to the man in the back, Tony Khan. Max tells him that recent offer to talk is too little too late. He’s upset that despite what he has created; he gets not respect. He hits grand slams on a weekly basis and is the only guy capable of carrying the company on his back. He tells the boys in the back that want his spot, they can have it. He doesn’t want to be here anymore. He calls the fans uneducated marks. Their opinions don’t mean a thing. Max calls himself the best in world. The fans take him for granted along with the big man in the back. Max knows he is the second best draw in the company; then calls out Khan for hoarding money to throw at ex-WWE guys. He calls on the boss to fire him because he doesn’t want to wait for his contract to expire in 2024. The rest of Max’s rant is completely bleeped out.

Johnny Elite issues an open challenge earlier today. And now we know who answered that challenge; Miro! He’s back!

Here's what he had to say ⬇️ #AEWDynamite pic.twitter.com/RpUvHRKmUz

Miro dominates Johnny, with Elite unable to get anything started. Elite finally connects with a round house kick, allowing Elite to hit a standing shooting star press. Johnny misses a corkscrew off the top. Miro with the pump kick and locks in the camel clutch. Elite is forced to tap.

Sunday night, after his match, Samoa Joe was attacked by Jay Lethal, Sanjay Dutt and Satnam Singh. They went after the all ready injured shoulder.

ReDRagon, The Young Bucks and Hikuleo vs. The Hardys, Jurassic Express and Darby Allin

Ten man tags are the bane of my existence. The Bucks have a super kick party with Jurassic Express and then counter Twist of Fates from the Hardy. The Bucks hit Jungle Boy with the Meltzer Driver to pick up the win.

Winners via pinfall: The Young Bucks, ReDRagon and Hikuleo

Keith Lee and Swerve Strickland are meeting with some movers and shakers in LA.

Athena makes her Dynamite debut, walking out on stage to talk with Tony Schiavone.

We aren't over this yet and you shouldn't be either #AEWDynamite pic.twitter.com/sV5eZsEiB7

She has her sights set on TBS champion, Jade Cargill. She wants to be the one to break Jade’s undefeated streak. Cargill isn’t one to sit around when called out. Jade hands the mic off to Stokely Hathaway to speak for her. The baddies start to get froggy, so Kris Statlander and Anna Jay come out to even the odds.

Drake with an ineffective chop; Wardlow takes him down with a lariat. He follows with a spear in the corner and then slams him in the middle of the ring. Wardlow hits two powerbombs and that’s it for the Symphony. Wardlow covers and gets the pin.

After the match, Tony Schiavone tries to get a word with Wardlow. Smart Mark Sterling walks out and he has papers. Wardlow is served with a class action suit on behalf off the American Arena Security Professionals. Mark will see him in court. Wardlow powerbombs the security guard who served him. I don’t think that is going to help his case.

Dan Lambert doesn’t like Dante Martin, but he can’t deny that talent. That potential won’t win him the TNT Title, though. Dante interrupts, saying he is better then Scorpio and will prove it on Rampage.

Soho takes a DDT on the floor heading into the commercial break. Ruby is able to recover and hit a back suplex in the ring. She gets the tag to Storm, who hits Hayter with a German Suplex and a swinging neck breaker. Hayter goes to the floor and is able to catch Storm with a DDT. Baker comes after Soho with a sling blade on the floor. In the ring, Storm blocks a suplex and slams Hayter. Soho misses the foot stomp and Baker catches her with a thrust kick. Baker with an underhook suplex. Soho connects with No Future, but Baker kicks out and goes for the Lockjaw. Ruby fights it off. Soho kicks out of a pin. Baker with a swinging neck breaker. Hayter almost runs into Baker on the apron, allowing Ruby to hit Destination Unknown. Soho covers to get the win.

After the bell, Hayter hits Storm and Soho with the Owen Hart belt.

Garcia powers Moxley into the corner. Mox answers with chops and then shrugs chops off from Garcia. Moxley wants a suplex, but Garcia is able to power them both through the ropes and out of the ring. Garcia slam Jon into the stairs. He then traps Mox between the ring and the stairs. Garcia dropkicks the stairs.

After the commercial break, Garcia hits a belly to back suplex off the top rope. Mox has been completely busted open. Garcia wants the Sharp Shooter, but Mox gauges the eyes to block it. The two go to the floor and Mox slam Garcia onto the steps. In the ring, Garcia wants a sleeper, but Mox counters into an arm breaker. Garcia reverses and Mox gets to the ropes. Garcia with a back suplex and follows with a piledriver. The two go to floor and the fight crashes into the time keepers area. Jericho runs down to the ring. Garcia rolls up Mox, who kicks out. Mox applies the bulldog choke and Kingston runs down to take care of Jericho.

After the match, Mox says he’s in for Blood and Guts. That’s the show; see you in seven.

The talk of tonight’s show will be MJF’s promo, so be sure to check it out. The rest of the show was solid, but it was disappointing to see the new AEW champion CM Punk in a trios match. Miro made his return and Athena made her Dynamite debut. Moxley and Garcia wrestled PPV quality match in the main event.