NWA POWERRRTrip 2: Homicide defends his title against The Last Bastion 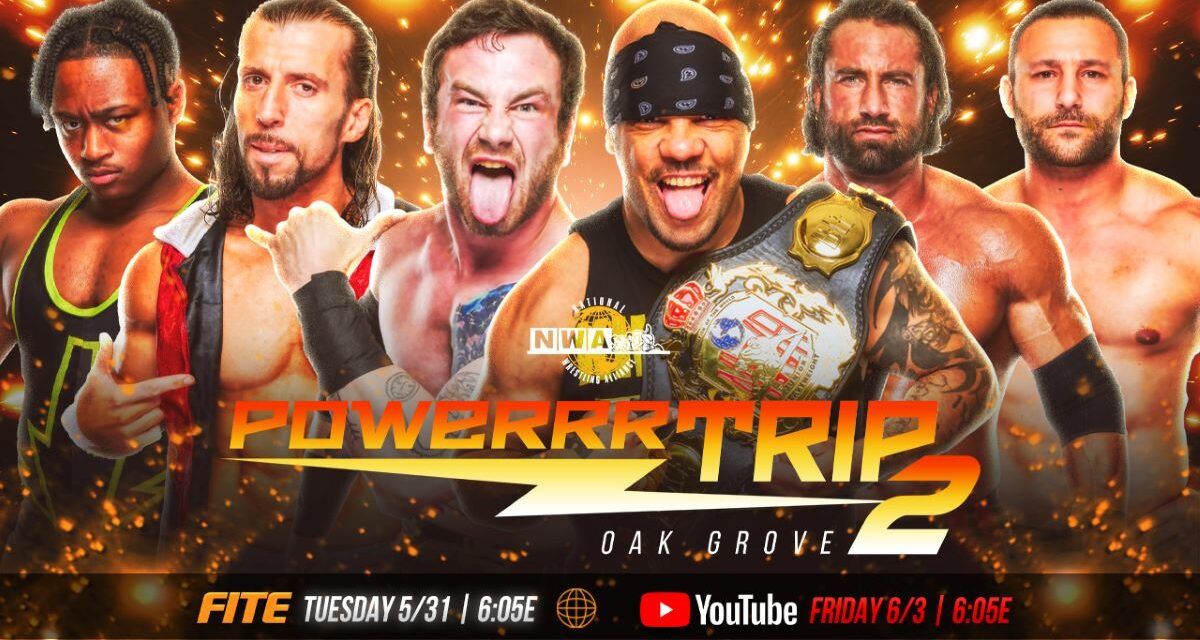 All this will be addressed in the main event, as the show opens Kyle Davis is in the ring with Colby Corino.  The Last Bastion says he feels amazing, and tonight is the night he lives up to his birthright and walks out of “this backwater town” of Oak Grove, KY as NWA Junior Heavyweight champion.  Davis points out that his family has never had a good history of facing Homicide.  Corino says Homicide has made a career off his dad’s name and blood, but he vows tonight he will build a new Corino dynasty.  Strong words for a confident challenger.

We’re at the Valor Hall, and Joe Galli, Tim Storm, and Madusa have the call.  Galli mentions this is the first time that co-managing directors of the NWA are in the same room together.  Playful banter aside, it’s now time for your First Match of the night, and it’s… 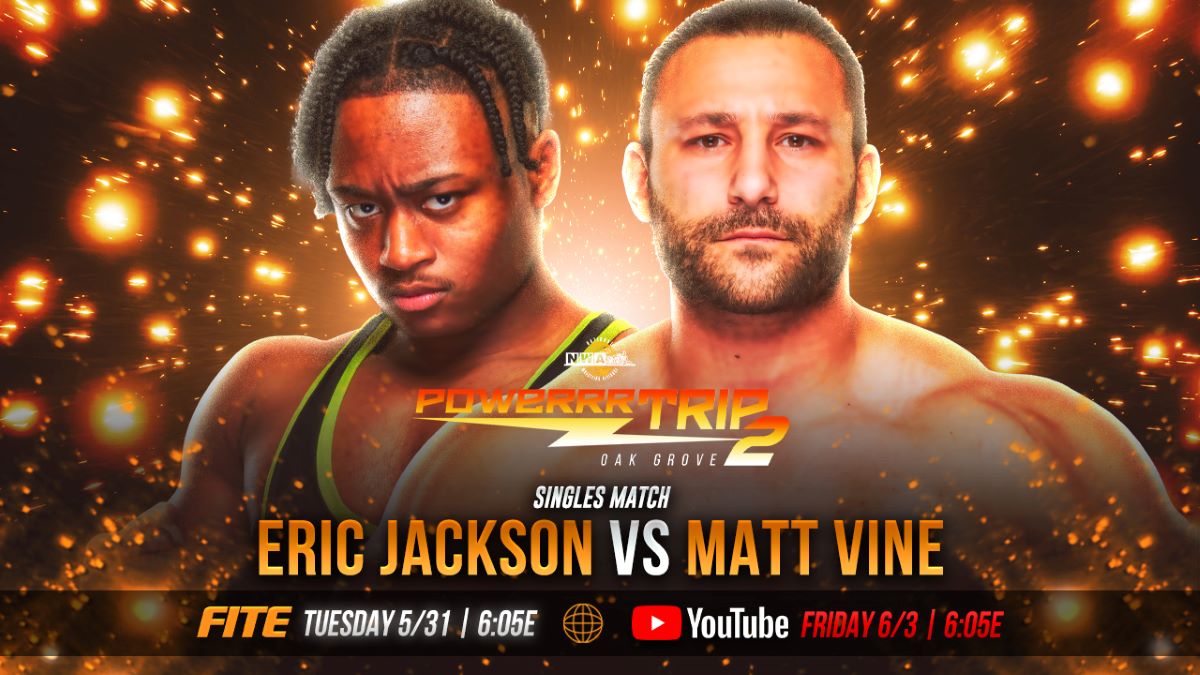 “The Instant Classic” Matt Vine vs. “The Distraction” Eric Jackson

According to Galli, Vine is an accomplished wrestler in OVW as well as a bodybuilder.  If I had to describe him, he looks like Chris Adonis did back in the days with WWE, circa the mid-2000s.

During the match, he proves to be very powerful against Jackson (Mr. Jackson if your nasty, quips Storm).  As vine dominates the match, he sends Jackson to the corner.  He rushes to the corner, and Jackson gets up a boot and fires up on offense with a dropkick and a sling blade to cover for a two count.  He goes to the top rope and misses a double foot stomp as Vine rolls out of the way.  Jackson hits the ropes but Vine Nails him in the mush with an Instant Classic Superkick that ends the match.

Your Winner via Pinfall:  Matt Vine.

Not a bad win for Vine’s debut.

Kayle Davis is backstage with Danny Dealz and two-thirds of The Ill-Begotten, Alex Taylor, and Jeremiah Plunkett.  Dealz says his suspension by Madusa is lifted, and it’s time to get back on their winning ways starting with this next NWA USA.  When Kyle Davis asks Alex Taylor what they need to turn the corner, he has a thought…that runs out completely.  Finally, Jeremiah Plunkett, apparently channeling his inner Arn Anderson, states emphatically that no one is going to make a name off The Ill-Begotten.  No one.

We go to a video package of the latest chapter in the feud between the NWA Heavyweight Champion Matt Cardona and Nick Aldis.  The Dealer wants Cardona in a steel cage match, and Cardona countered with a deathmatch since he’s a “Deathmatch King.”  But there’s breaking news, as Cardona suffered an arm injury sustained from a GCW event.  Cardona tweeted it out, in case you missed it…

Got a MRI today. Bicep is torn. Surgery needed. Will unfortunately need to cancel some dates.

So, what does this mean for the Alwayz Ready PPV?  We’ll keep you up to date with any developments.

Kyle Davis Is backstage with the NWA Women’s champion, Kamille.  He wants to discuss her upcoming tag team next week, when she and Kenzie Page face Missa Kate and KiLynn King, her opponent for The Burke on the Pay-per-view.  Kamille, on the other hand, wants to talk about important things like her man, Thom Latimer, getting gold around his waist so that they can be the power couple of the NWA.  Davis tries to steer the conversation back to KiLynn King, and Kamille gives her credit, but she is not the Brickhouse.  She states she will be the one-time champion, and King is not taking it from her.

Strong words indeed from the holder of The Burke.  Now let go to strong actions in the ring with… 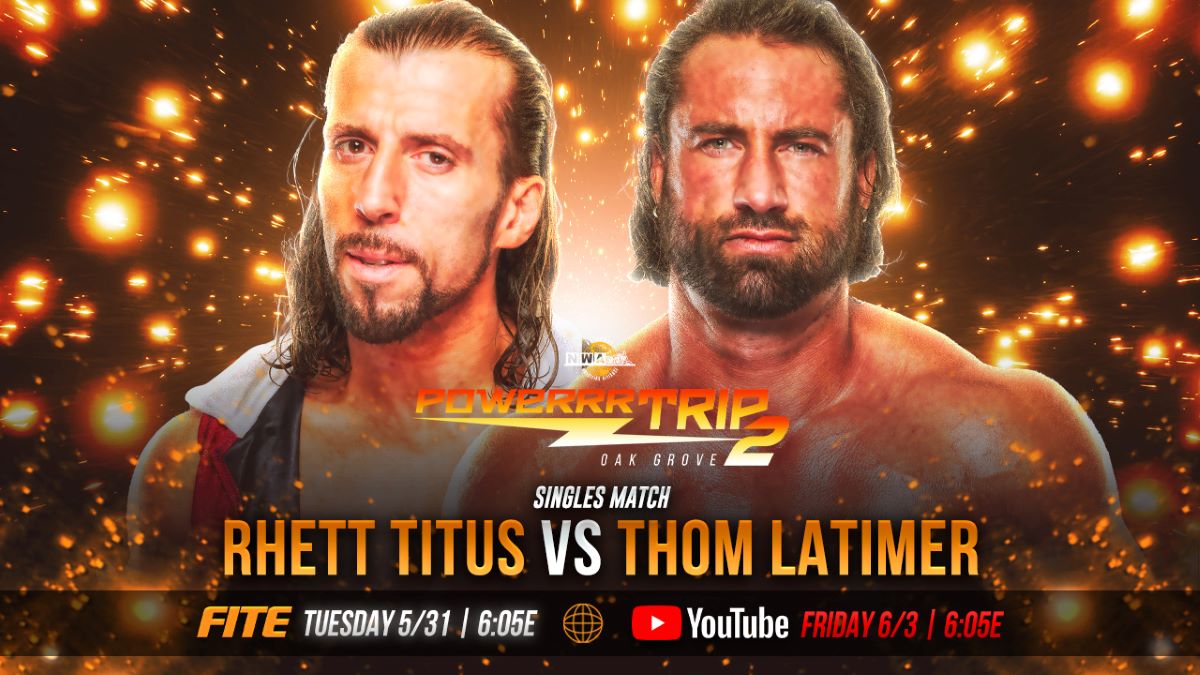 The “King of All Evil” Thom Latimer vs. “The Professional” Rhett Titus

Titus has a chip on his shoulder, notes Madusa, and he is certainly looking to make his mark in the NWA.  As the Code of Honor is recognized by both men(!), this is a match where Latimer looks to utilize his size and power versus Titus’ technical wrestling savvy early in the match, but Latimer has some nice catch moves, too.  How very British

A back elbow by Latimer lands on Titus’ head, but it starts hurting.  As the ref goes to check for signs of injury, it’s determined that Latimer can still go, but once Latimer goes back to work Titus gets nasty and begins targeting the hurt left elbow/arm, and The Professional is in full control.  He traps his arm in a unique leg submission, but Latimer manages to lift him one-armed into a backdrop suplex.  It was ugly, but gods damn it was impressive.  That took a lot out of Latimer and Titus goes right back to work on the arm, but Latimer fights back and hits a belly-to-back suplex.  Latimer attempts with a pop-up powerbomb, but he’s got nothing in his arm to lift Titus.  He switches to a spear on Titus to cover but gets a two count.  Now Latimer attempts a Piledriver, but there’s no strength in the left arm.  Titus takes advantage and gets a belly-to-belly suplex to cover for a two count, and then transitions to crucifix pin for another two count.  Latimer calls an audible and gets a one-armed pop-up powerbomb to finally get the three count.

But it’s time for the Main Event, and this is for the… 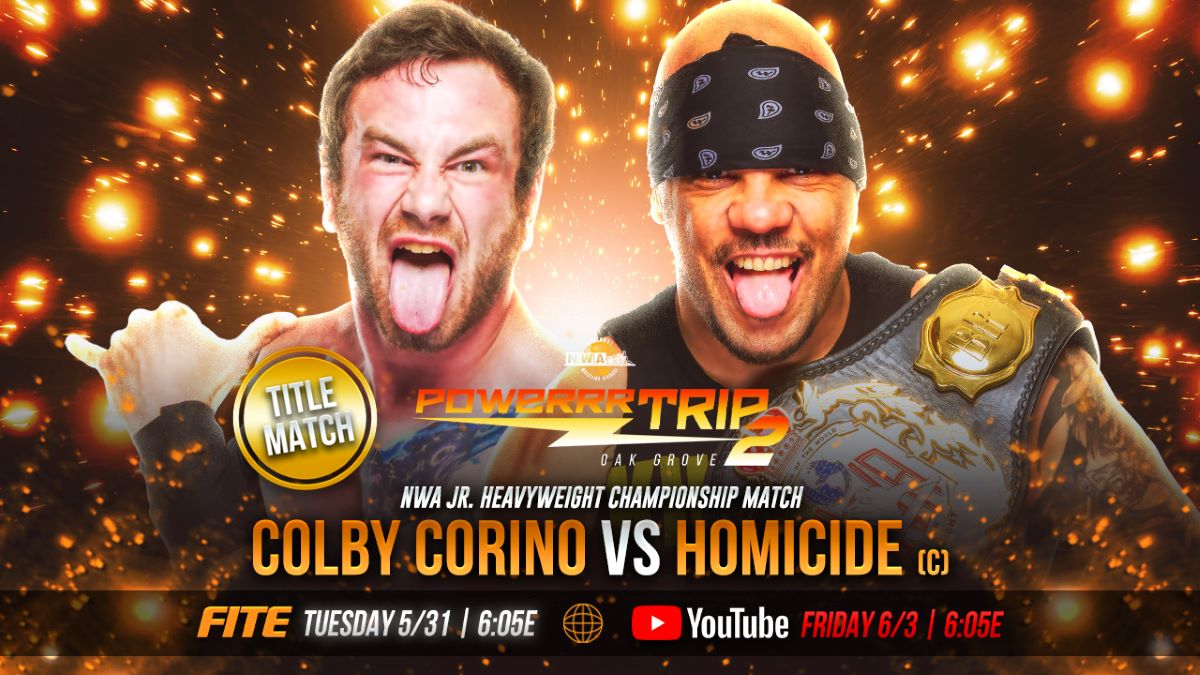 As Kyle Davis delivers the boxing-style intros for both men, you can tell this is going to be a fantastic match right from the get-go.  As the bell rings, Homicide and Corino go to a collar and elbow tie up.  It looks to be evenly matched, but it isn’t long before Homicide goes right to work on the upstart Corino, but The Last Bastion can hold his own against the Notorious Legend.  He goes for the Cop Killa finisher, and Corino backs away immediately.  Corino slaps him across the face and Homicide returns the receipt as he clotheslines him back down, and then hits the Three Amigos (R.I.P. Eddie Guerrero), followed by an underhook suplex for a pin cover, and only gets a two count.  Now he channels his inner Mike Tyson and bites Corino’s ear and then hits an exploder suplex.

Corino is not looking good at this point.  As Homicide climbs up the top turnbuckle, Corino kicks the ropes to send him crashing down.  He follows with a slingshot plancha to Homicide on the concrete floor.  Back in the ring, he gets the signature Colby Crush and then punches away at his head.  Corino goes for a suplex, but Homicide reverses it to a neckbreaker, then a second one, and a third.  He goes for a Powerbomb, but Corino sunset flips through and he nails a sliding clothesline to cover for a two count.  Homicide rushes to the corner and Corino ducks through the ropes and gets a springboard forearm for another two count.  He follows with a lumbar check for yet another two count.  Corino climbs the top rope but gets scouted and Homicide brings The Last Bastion down to land a brainbuster to cover, and he just barely gets his foot on the bottom rope.  Homicide sends up Corino and delivers the avalanche Koji Cutter for the one, two…Corino kicks out.  Homicide can’t believe he kicked out of his finisher.  Corino’s eyes look very Krispy Kreme’d and as Homicide goes after him, he gets suckered by Corino into his own Koji cutter move.  Corino cover for another close two count.

Corino is grasping at straws, or in this case, a piece of the turnbuckle to use on Homicide, but referee Jacob Fritz intercepts the foreign object and goes off to discard it.  With the Ref’s back turned, Corino splits the upright of Homicide’s…err, Notorious 187’s to cover for yet another two count.  Corino tries his Sonsetter finisher but Homicide reverses to a pin that he barely escapes.  Corino Gets Homicide up for a huracanrana, and he over rotates, and Homicide has the pin with a handful of tights for the one, two, and three.

Corino is still livid at the decision and The Notorious Legend celebrates his latest title win as the show rolls to credits.

Yeah, this is not the last time the names Corino and Homicide will cross the squared circle, but they put on a hell of a Junior Heavyweight match.  While it’s great Homicide retains the belt, I wonder for how long.

Latimer and Titus was another classic, and again, I think Titus is building to something else down the road which bears seeing.  Jackson and Vine were okay, but this would’ve been better showcased on NWA USA.

For now, see you in seven on another POWERRRTrip!