NXT: Diamond Mine dissents at In Your House go-home show 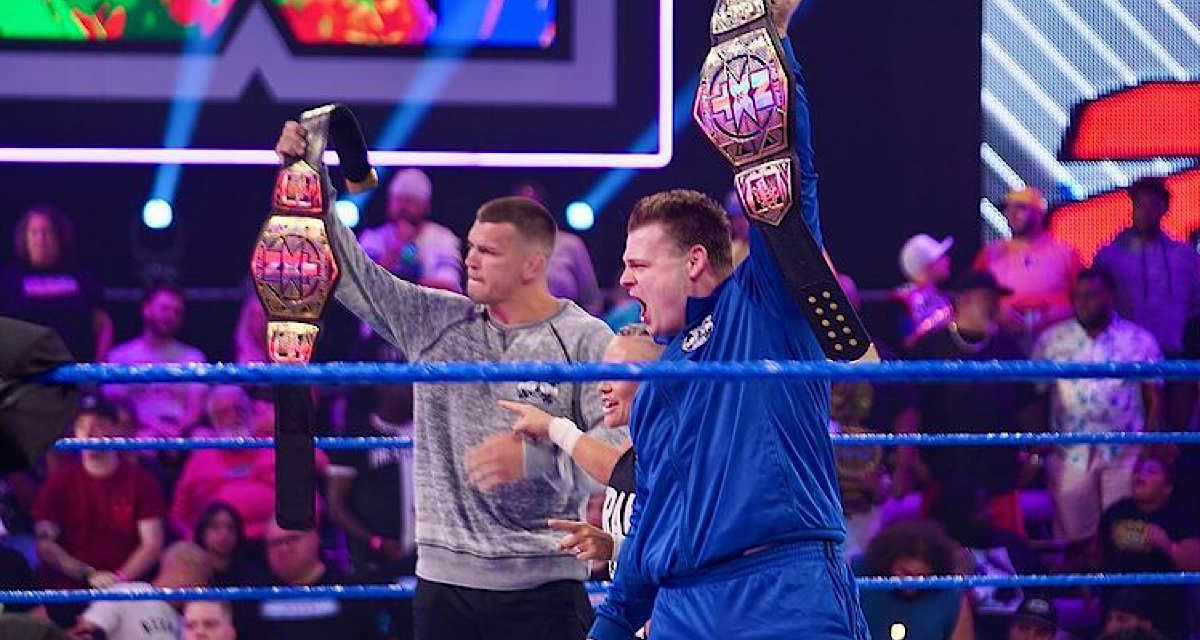 Try as he might, Roderick Strong can’t avoid his duties as leader of Diamond Mine despite the other three original members escaping fairly easily. Instead, disgruntled Strong has taken his emotions out on the Creed Brothers, who will face the NXT Tag Team Champions Pretty Deadly this Saturday at In Your House. Strong’s caveat is that if brothers Creed are defeated, they’re out of the faction. Diamond Mine, evidently, isn’t forever.

Perpetually despondent Strong sends the Creed Brothers and Ivy Nile to the back, continuing the growing dissension within Diamond Mine. Strong slaps Kemp across the face, and the upstart explodes against the NXT Tag Team Champions preceding picture-in-picture. “Stamina monster” Strong makes the comeback with his signature chops and backbreakers before Pretty Deadly attempt to utilize the championship belts. The Creed Brothers sacrifice themselves, but the champions’ Spilled Milk finisher puts it away.

Solo Sikoa has Cameron Grimes’ back tonight, but he’s “got next” in line for the North American Championship. Duke Hudson steps in, talking down to Sikoa, who makes a challenge for tonight.

Earlier, Grayson Waller “held court regarding the NXT Breakout Tournament.” He hyped up Tiffany Stratton before Fallon Henley’s big friend Josh Briggs threatened him from behind.

From a scene straight out of a movie, Tony D’Angelo and his crew meet with Legado del Fantasma on a yacht. He talks it out with Santos Escobar, and the challenge is made: D’Angelo, Channing Lorenzo, and Troy Donovan versus Escobar, Cruz Del Toro, and Joaquin Wilde at In Your House, where the losing team joins the opposing faction.

Commentary claims Jade has a “fair fight” since Legado del Fantasma isn’t present, but that’s assuming Lopez isn’t seasick from the yacht. While Lopez is in control, Vic Joseph and Wade Barrett turn their attention to Hell in a Cell for a cheap advertisement, but Jade eventually makes a comeback. Jade scales the ropes and delivers a senton for the pinfall victory.

Wes Lee’s heartfelt interview is interrupted by Sanga, who says, “You are not 10-feet tall, guy… but brother, I know, you have giant heart. So best of luck for tonight.” Props to both men for making NXT’s ingenuine writing seem actually pretty genuine.

WWE really documents everything, including footage of 13-year-old Roxanne Perez meeting Natalya. “I even missed my highschool prom to make it to a match,” she says before vowing to win the Breakout Tournament finals.

As Quinn beats down Lee, commentary argues whether or not it’s Ezekial or Elias, insinuating that they aren’t really interested in this. A lethal lawn dart from Quinn wakes everybody up, but Lee rolls his opponent for the sneaky quick victory.

Roderick Strong goes off on Diamond Mine for interfering, stating that if the Creed Brothers don’t defeat Pretty Deadly, they’re out of the group.

Joe Gacy tells a story of how Rick Steiner’s in-ring violence led to Bron Breakker’s “uncontrollable rage.” Shoutout the production crew for creating a package that makes this storyline sensible. But one step forward, two steps back as Gacy’s laugh track plays in Breakker’s locker room.

According to accountant Kiana James’ numbers, she tells Ivy Nile that “the Creeds have less than 12-percent chance at winning” at In Your House. But what happens when you add Kurt Angle to the mix?

Hudson takes control over fan-favorite Sikoa, who eventually makes the comeback with a Samoan drop, superkick, and hip attack. He delivers the finishing top-rope splash for the pinfall victory, although Hudson impressed with his short amount of offense.

Tiffany Stratton speaks some truth, saying that Roxanne Perez’s life “is as exciting as a cardboard box.” They’ll meet in the Breakout Tournament finals next week.

New signee Thea Hale graduated from high school this Wednesday, and of course, WWE cameras caught the moment. In an empty room, she throws away the options of attending Notre Dame or Alabama. “I will be attending Andre Chase University!” Well played, NXT. Well played.

Waller makes Brooks Jensen and Fallon Henley head to the back as he takes control, riding his opponent like a bull. The audience starts an absurd “you can’t wrestle chant” towards Waller, who is legitimately a very underrated in-ring competitor. Meanwhile, Sofia Cromwell, Mr. Stone, and Von Wagner appear ringside, allowing Waller to capitalize with his finishing stunner for three. Wagner attempts a post-match beatdown before Jensen makes the save, and Cromwell holds the former back.

James’ theme song has no right to slap so hard for an accounting gimmick. “You can’t learn that in the gym! It’s brains over brawn always!” shouts out James, who is eventually pinned with a slam. Out come NXT Tag Team Champions Pretty Deadly in crop-topped Diamond Mine shirts before the Creed Brothers appear, standing tall with the belts.

A suave Italian narration talks about a new wrestler’s high-class way of living. Giovanni Vinci is coming soon to NXT.

Carmelo Hayes and Trick Williams join commentary, which is always a good time because their verbiage is so undeniably theirs; you can’t write charisma. Meanwhile, Grimes and Frazer tussle with great speed and athleticism, trading comebacks following picture-in-picture. They exchange strikes as Frazer pulls off an intense hurricanrana and outside dive, but Grimes recuperates with a top-rope German. He connects with the Cave In for the pinfall victory, fending off an attack from Hayes and Williams at show’s end.

A really underappreciated aspect of NXT 2.0 is the continuity. Matches and rivalries hearken back to incidents that happen even weeks beforehand, and the fluidity of all the character storylines is often pretty immersive. The in-ring action tonight was short and sweet – doing what needed to be done before Saturday’s “premium live event.”