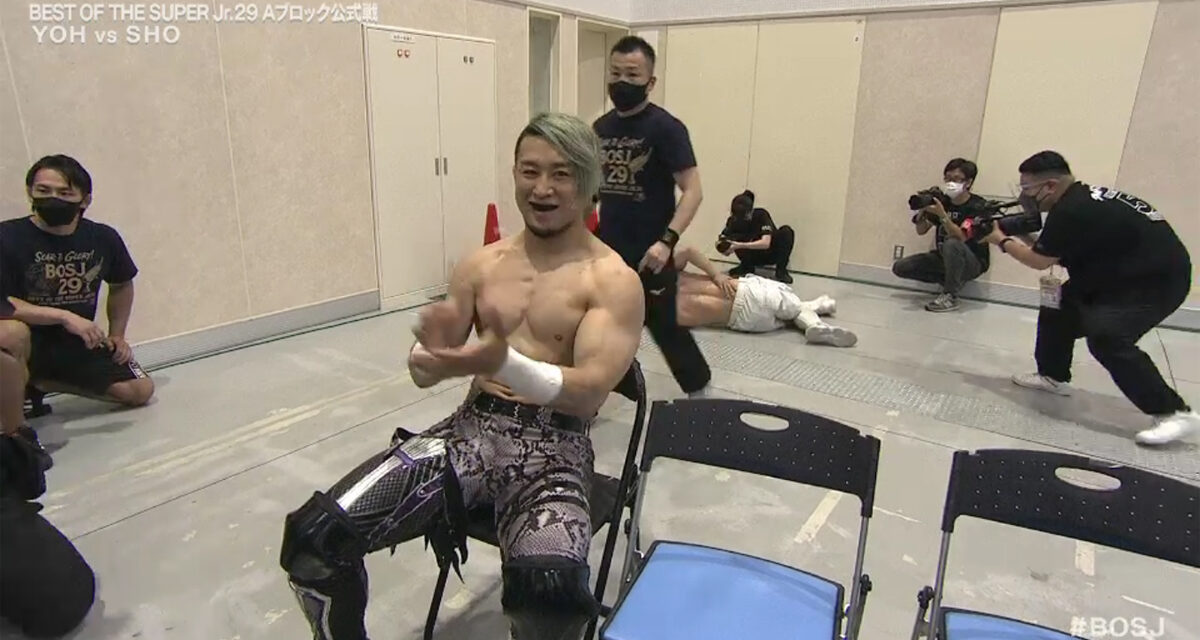 It will be El Desperado versus Hiromu Takahashi to determine the winner of NJPW’s Best of the Super Juniors on Friday.

Before their B Block finals match Phantasmo had this to say to El Desperado.

“We should have been in the main event. You choked. You lost to Robbie Eagles like you always do. Now, we are the semi-main event,” said a frustrated Phantasmo.

As Phantasmo took a stroll on the floor Desperado fired back.

“I think you cannot do a main event,” he said.

“I cannot do a main event? Shut the f–k up!” Phantasmo fired back.

“Time limit draw, Kevin (Kelly). Did you ring the bell? Stupid ass monkey,” Phantasmo asked the official before getting back into the ring.

“The clock is running. There is 30 minutes on the clock. Can Phantasmo run away for 30 minutes?” asked Kevin Kelly while Phantasmo did jumping jacks on the floor.

“I am not warmed up. All I got to do is draw,” said Phantasmo.

Desperado started to chase Phantasmo around, inside and outside the ring trying to catch him and force him to fight.

Phantasmo started dishing out the offence once he took control of the match. Phantasmo gave Desperado a DDT off the apron and onto the floor. The official began their count. Phantasmo grabbed a steel chair from under the ring. Phantasmo placed the chair on the apron then slammed Desperado’s head onto it. Phantasmo put Desperado up for a suplex and then just dropped him off the top rope to the floor.

Phantasmo tried to give Desperado his own finisher – Pinche Loco – but his leg gave out from under him. Desperado pinned Phantasmo with his own CR2 finisher to claim his spot in the finals on Friday.

Semi-finalists Hiromu Takahashi and Taiji Ishimori battled in the main event to determine the winner of A Block. 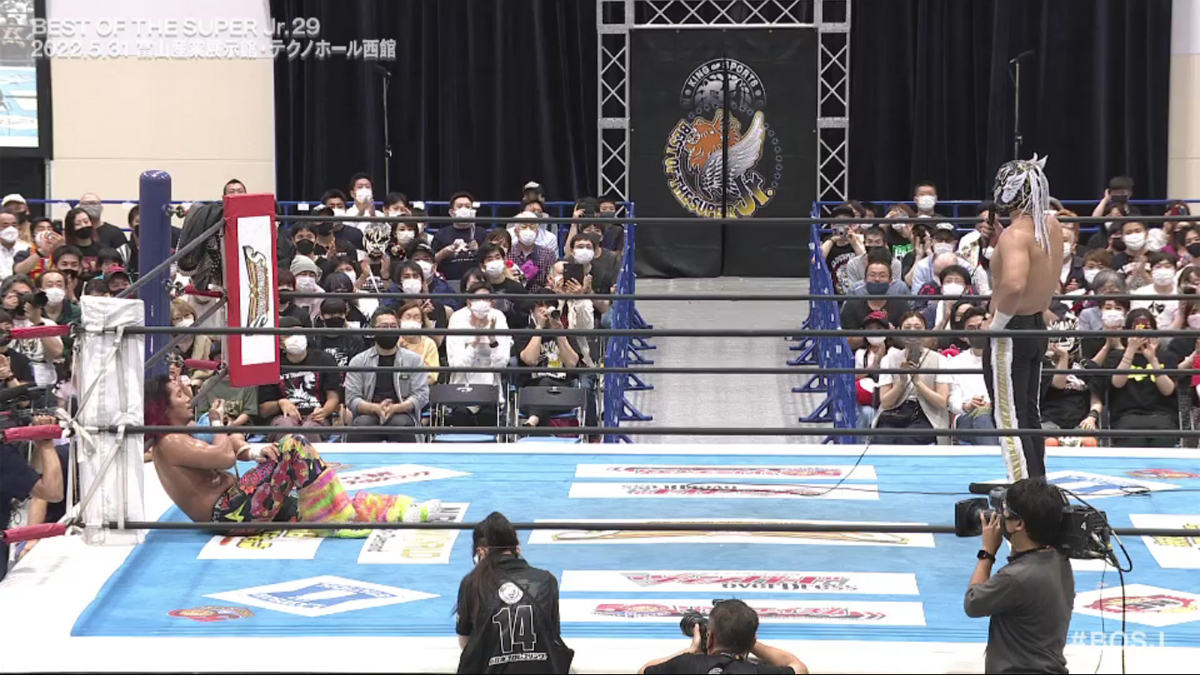 Ishimori just dominated for the most part working over Hiromu’s injured shoulder.

Hiromu did lock on his ‘D’ submission hold but Ishimori managed to make it to the ropes. Ishimori rammed Hiromu’s shouder into an exposed turnbuckle and a steel post. Ishimori couldn’t survive another ‘D’ lock and submitted giving Hiromu the win.

Titan spoiled Robbie Eagles’ dream of making the finals in their match. Titan kicked his way out of Eagles’ Ron Miller Special and wrapped him up like a pretzel for the spoiler victory.

Douki versus Master Wato –  BEST OF THE SUPER Jr. 29

Ryusuke Taguchi versus Yoshinobu Kanemaru – BEST OF THE SUPER Jr. 29

Kanemaru rolls up Taguchi for the win avoiding his butt finisher.

Alex Zayne versus Clark Connors – BEST OF THE SUPER Jr. 2

Connors wins with the Trophy Kill.

Wheeler Yuta versus TJP – BEST OF THE SUPER Jr. 29

As the bell rings, Sho leaves the ring, mouths off on the microphone and leaves. The official begins their count. Sho has a change of heart running back to the ring before the 20 count. Sho distracts the official so he can clobber Yoh with the bell hammer. He leads him to the back of the arena whipping him into a steel door. Sho takes the BOSJ trophy threatening to walk off with it. While the official is putting it back where it belongs Sho hits Yoh with a steel chair and takes a seat in the crowd. When his wrench is taken away by the referee Sho pulls out another he hid behind a turnbuckle pad, clocks Yoh in the head with it and pins him with Shock Arrow.

Robbie Eagles versus Titan – BEST OF THE SUPER Jr. 29

Akira runs along the apron hitting his Speed Fire knee to the back of Austin’s head. Austin is counted out. Akira flips Austin a double one fingered salute. Akira poses with Austin’s X-Division Championship Belt as he verbally tells Austin to do something which is physically impossible…in Italian.

El Desperado versus El Phantasmo – BEST OF THE SUPER Jr. 29

Hiromu Takahashi versus Taiji Ishimori – BEST OF THE SUPER Jr. 29