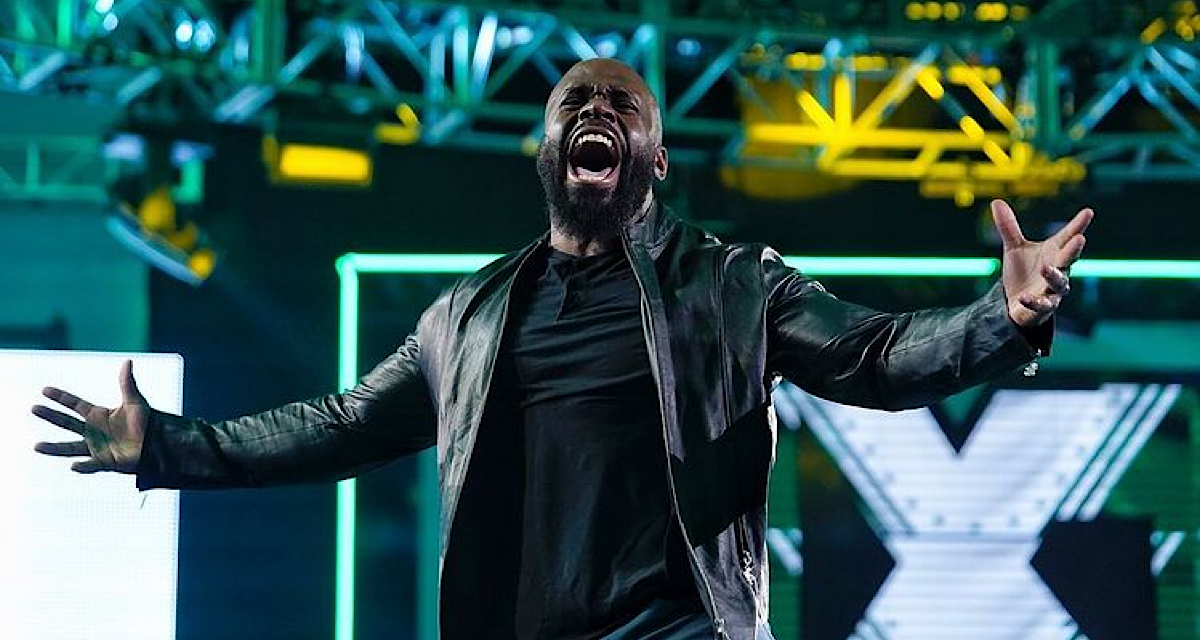 Ditching Commander Azeez, the accent, and the Nigerian prince character in whole, main roster competitor Apollo Crews returned to NXT. In his first match under the brand since 2016, Crews picked up the victory in tonight’s tag team main event. Earlier, however, he confronted NXT Champion Bron Breakker, admitting that he originally departed from NXT too soon, and that he was now back to “correct history.”

“Suddenly, all is right in the world: the ‘A Champ’ is back,” aptly said commentary when the new North American Champion Carmelo Hayes and Trick Williams opened tonight’s episode. They talked their talk until fan-favorite Solo Sikoa interrupted, who claimed that he’s “got next” before Grayson Waller arrived to initiate a three-on-one attack. After break, The D’Angelo Family instructed new crew members Cruz Del Toro, Joaquin Wilde, and Santos Escobar around – the latter of which begrudgingly competing later under “The Don’s” orders.

Briggs is backed by Brooks Jensen and Fallon Henley while Wagner sides with Mr. Stone and Sofia Cromwell – a presentation that inexplicably really works for him. Brawling ringside, Wagner unwarrantedly attacks Jensen’s injured right hand, which is in reality a coup: Henley distracts the referee as Jensen hands Briggs his cast, hitting Wagner with and delivering a clothesline for three. Wagner at last has something going for him – or at least had before this loss.

An iced-up Solo Sikoa says he wants both Grayson Waller and Carmelo Hayes tonight, regardless if a partner joins his side. Afterwards, Andre Chase presents a Chase University scholarship to Thea Hail before Pretty Deadly interrupts, but Bodhi Hayward reminds them of their loss on Saturday.

New member of the D’Angelo Family, Escobar, was doing some paperwork earlier according to Tony D’Angelo on commentary. Even though Frazer’s athleticism is amazing, D’Angelo’s yacking is a tad more entertaining. “What’re you doing?… Get that outta your repertoire – nobody likes that,” he nonchalantly tells Escobar after a suicide dive. Following break, the former Legado del Fantasma leader retains control with a Boston Crab, but Frazer comes back “like greased lightning.” Ringside, Troy “Two Dimes” Donovan hands Escobar a crowbar, which he refuses. Thus, Frazer capitalizes with a Phoenix Splash for a big statement victory. “Nice job, moron,” says a hilarious D’Angelo.

NXT Champion Bron Breakker arrives with a mic in-hand, asking for his next challenge; to a huge reaction, the main roster’s Apollo Crews makes a surprise return to NXT – leaving his accent behind, by the way. Crews speaks truth, saying that he left NXT too soon, but he’s “back to correct history.” To paraphrase Triple H, “I got a question – matter of fact, I got a problem. Aren’t you supposed to be Nigerian? What happened to your accent?”

Joe Gacy talks to his two druids, rambling about their progression as The Dyad, who will debut next week.

What Stratton lacks in technical ability, she more than makes up for in presence and conviction. Perez clearly has more experience, visibly having to redirect her opponent in a spot before break. A male group in the audience lose their minds when Stratton’s extensions get pulled out, starting a “weave” chant of all things. Meanwhile, Perez continues to fight through a targeted arm and nearly misses Stratton’s beautiful top-rope moonsault. The former delivers Pop Rox for the victory, winning the Women’s Breakout Tournament as her friend Cora Jade joins her side in celebration.

Toxic Attraction appears, because they don’t get enough screen time. After Mandy Rose talks trash, the group attacks, but Indi Hartwell evens the odds. Backstage, a downed Bodhi Hayward says, “It was Pretty Deadly,” and Andre Chase promises to “whoop their asses.”

On June 27, John Cena returns to Monday Night Raw! Vic Joseph tells Wade Barrett, “He’s had so many memorable moments. My favorite moment (is) when he buried you under all those chairs! Do you remember that?”

A distraught Tiffany Stratton interrupts Wendy Choo’s interview time, and the latter throws an undefined orange liquid in her face. This’ll likely start their next feud a la Chris Jericho spilling coffee on Kane one time.

Unless tonight’s main event isn’t a handicap match, Chase’s gutsy move here just buried the lead. The former tag team champions beat up the professor as Bodhi Hayward crawls out, but Thea Hail makes the ringside save instead. Chase comes back with his crowd-interactive “Chase U” stomps, but Spilled Milk from Pretty Deadly puts him away.

The new attire and fire motif is a package deal ready to be sent immediately to the main roster. It’s the bold, heavily-produced character that WWE loves, but of course, the silver platter is dropped time and time again. Anyhow, Fyre delivers a big Swanton across the ring to gain the pinfall victory, shaking Paxley’s hand post-match. At the entranceway, Lash Legend blindsides Fyre to “Lash is trash” chants.

The new NXT Tag Team Champions the Creed Brothers are finally congratulated by Diamond Mine leader Roderick Strong. Edris Enofe and Malike Blade break up the group hug, respectfully asking for a title shot for next week and receiving it. “This isn’t Christmas,” says Strong, reverting back to the gray-haired, tough love father. This man ages quicker every day he isn’t granted his release.

Fabian Aichner has been repackaged as Giovanni Vinci, a high-class Italian who re-debuts next week.

In his first NXT match since 2016, Crews is being slotted into the fold seamlessly – and he’s looking real jacked, baby! Still, Hayes and Waller aren’t to be overlooked, and the former’s tilt-a-whirl maneuver is done with insane speed. Sikoa eventually receives the hot tag, and after picture-in-picture, he takes out Trick Williams ringside. Hayes and Waller capitalize for an offensive string that persists for way too long until Crews finally makes the comeback. “Strength, power, high-flying ability – the man’s got it all,” says commentary about Crews, who counters Waller’s rolling stunner into a powerbomb for three.

Apollo Crews looked fantastic in tonight’s main event, and he’s gonna thrive in this environment. And for the NXT 2.0 homegrowns, they’ve really come into their own; the rest of the card was pretty enjoyable as well.