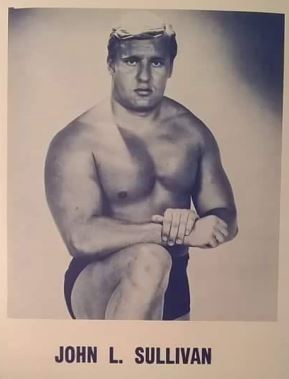 Television station WPXI in Pittsburgh is reporting that “Luscious” Johnny Valiant has been killed in a traffic accident in Ross Township, Penn. Valiant, whose real name was Tom Sullivan, was 71 years old.

According to reports, Valiant was struck by a pickup truck while trying to cross the busy McKnight Road in Ross Township. He was struck and taken to hospital, where he died.

Sullivan, born on November 25, 1946, was always a wrestling fan, and while at Fishburn Military Academy, in Waynesboro, Virginia, he was a classmate of Vince McMahon Jr. During an interview years ago with radio host John Arezzi, Sullivan said that the academy was full of “social cripples” who couldn’t find their way in life. At the school, he played football, basketball, baseball, and wrestled.

In a Newsday interview with Alfonso Castillo, Sullivan described McMahon at school: “He used to walk around, kind of posing and what not,” Valiant told Castillo. “By way of the magazines, I was told his dad was a top wrestling promoter in Washington D.C. that he was this wrestling czar’s son. I said, ‘You’ve got to be kidding me.’ And he said, ‘Yeah, my dad is a big shot.'”

After military school, Sullivan knocked on the door of Pittsburgh legend Bruno Sammartino and asked about getting into the wrestling business. Sammartino helped train him, and helped where he could in the local territory; he also worked for The Sheik, learning the ropes out of Detroit.

The 6-foot, 245-pound grappler debuted in Pittsburgh as John L. Sullivan (named after the famed boxer), and in its March 1970 issue, Wrestling Revue named Sullivan its rookie of the year.

But his break came when Bobby Heenan came looking for a partner for Jimmy Valiant (James Fanning).

The Valiant Brothers were the creation of Heenan, though he later disowned them, saying they too frequently snubbed his guidance. Heenan, who had been working as Jimmy’s manager, needed a replacement for himself when he decided to jump from the Indianapolis territory to Minnesota in 1974. Jimmy and Heenan took a look at John Sullivan, who worked for Dave “The Bearman” McKigney’s operation in London, Ont. “So we met Johnny there [in Ontario] and what a good-looking, big kid, you know, talented,” Jimmy said. Heenan suggested that the two could be bleached blond “brothers,” and Jimmy started hyping the team to the max — Handsome Jimmy Valiant and Luscious Johnny Valiant.

“We just drove it in them [the fans] for five or six weeks and when Johnny walked down that aisle the first time in Indianapolis, the people were so ready for it, man. They were throwing beer on us — it just took off and we were on fire,” Jimmy said. The Valiants quickly won the tag title in the Indianapolis-based WWA in 1974, knocking off the dream team of Dick the Bruiser and Bruno Sammartino. They then headed to New York as the first important bleached blond heel team since the Golden Grahams more than a decade earlier. They beat Dean Ho and Tony Garea for the WWWF world title in 1974 and held it for more than a year, the longest world belt reign in federation annals. They regularly headlined against Bruno Sammartino and Chief Jay Strongbow, and were the only true “team” of their day to top a WWWF card. They were the first tag team inducted into the WWE Hall of Fame, in 1996.

“The old time wrestling fans, the Grahams are the ones they focused on. Jimmy and Johnny brought it back for those kinds of fans,” said Davey O’Hannon, who worked with and against the Valiants. “These guys had it all. They were a good mixture of sneaky, vicious, and cowardly. They wrestled, they did high spots, they clowned around a little bit, and they got people out of their seats.”

But that is only part of the legend of the two flashy dudes. “They were both insane,” said Larry Zbyszko, a frequent adversary in the WWWF. “They’d go into a restaurant every night, and they’d be loud and they’d be sticking out with their hair, the costumes. They’d be going ‘Hey, baby, how you doing?’ There would be people sitting at the tables. ‘I love your wife, looks good, baby! She’s such a sweetie.'”

After eating an expensive dinner, Johnny habitually went to the register to get change for a dollar while Jimmy warmed up the Valiantmobile. “The manager thought [Johnny] was up paying for the bill,” Zbyszko laughed. “They were so loud and obnoxious that the guys couldn’t wait for them to leave, that by the time they turned around, the manager would be holding open the door, thanking them for coming to the restaurant. They never paid for a dinner. It happened every night.” 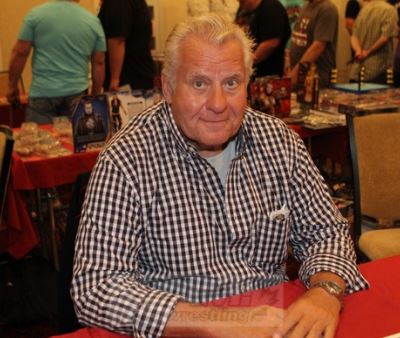 Johnny Valiant at a fan fest in June 2017. Photo by George Tahinos

The Valiants also spent time battling the likes of Jos LeDuc and Larry Hennig in the Midwest. They were tag champions in Georgia and San Francisco, among other places, and had an encore in the WWWF in 1978-79 with Jerry Valiant, the erstwhile Guy “The Stomper” Mitchell, who was added to the family when Jimmy contracted hepatitis in the winter months and was sidelined for several weeks.

“We came back in and won the titles. I had a nice run with [Jerry], and over to Japan with him, as well,” Johnny said.

Johnny went on to work singles and later manage Hulk Hogan in the American Wrestling Association.

In the WWF of the 1980s, Johnny Valiant was a manager to the Dream Team (Brutus Beefcake and Greg Valentine), and also had Dino Bravo as a client for a time. Mostly forgotten is the fact that it was Valiant that debuted the initial Demolition tag team in WWF. The fast-talking manager — Johnny V — also served as an occasional heel commentator on various shows.

By mid-1988, Valiant was managing the Destruction Crew (Wayne Bloom and Mike Enos) in the last days of the AWA.

Valiant’s fame increased through appearances on HBO’s The Sopranos as Tony Lip and his popular, one-man, standup act recreating his career.

In a 2003 interview with Scott E. Williams of the Galveston Daily News, Valiant talked about being a comedian.

“When I get out on stage and perform, I keep turning over rocks and things really spawn out of that,” he said. “My act is 100 percent more or less improvisation, and they say that’s hardest of all, but for me, it’s pretty easy. That’s basically what I was doing on my commentary and interviews.”