Guest column: Read up on the late ‘Gigolo’ Johnny Mercedes, ya Rummies!

The room is in a joyous mood held together by an atmosphere of stories and liberal amounts of booze. The guy on the mic points to WWF agent Pat Patterson, winks at him and playfully says, “Hey bartender! You know how to make a fruit cordial? Buy him a drink! Talk to him!” In return, the man on the microphone, “Gigolo” Johnny Mercedes, received the nastiest look of disdain from the agent. Gigolo always joked with me about that night costing him a spot in the WWF. After all, I did insist he do the line and I assured him that Pat would love it. To this day, I’m still tickled by this memory and I can’t help but laugh. 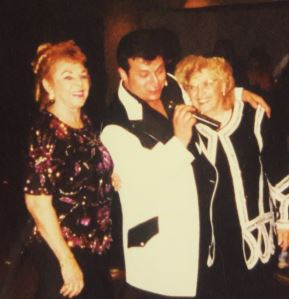 That night we were at the Cauliflower Alley Club reunion at the Riviera in Las Vegas and while Johnny may not have curried any favor with Pat Patterson, former AWA World champion Nick Bockwinkel loved him. The Fabulous Moolah was taken aback by his charm and his voice as well: “You couldn’t tell by looking at him.”

He was an authentically funny guy. He had the mannerisms and phrasing of Rodney Dangerfield with a singing that married the voices of Dean Martin and Bobby Darin. His impersonation of Ralph from The Honeymooners was off the charts! He was sharp and quick with his wit as well. One time he tipped a stripper his business card and said, “I’m an entertainer myself, ya know!” He was always the hippest, coolest cat in the room.

With his death on Wednesday, March 21, 2018, at the age of 52, I find myself thinking of him often, both the real life Mark D. Gallo, but especially wrestler/singer “Gigolo” Johnny Mercedes. 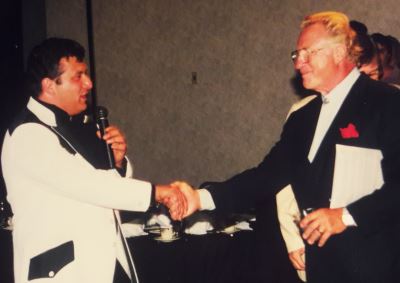 Johnny made people laugh. That was his spot in the world. He was a kind man who made people happy. I’ve seen him sing at various venues and regardless of whether the crowd was there to see him on that occasion, they walked away happier than when they walked in. I’ve seen him sing in front of a few thousand people or just a handful of “rummies” (one of Gigolo’s favorite terms) at a corner dive bar. He entertained every single one of them and put smiles on their faces.

I met him in 1993 when I was promoting one of my first shows of hundreds in the Milwaukee area. He was working with Windy City Wrestling in Chicago at the time. During a match in 1992, he broke his collarbone during a match with Mike Anthony which had him laid up in pain for months. His debut match with my budding Milwaukee promotion, Mid-American Wrestling, was one of his first matches back in action. He walked to the ring for his match, audaciously singing “The Lady is a Tramp” over a track of Sinatra and Count Basie’s band from Live at the Sands. The fans booed him, but I loved him! He was crazy croonin’ cat!

Before I met him, he wrestled as one half of the Tokyo Bullets in the waning days of the AWA and they were damn good little team too! In 1984, at 18 years old, he was trained by Ray McCord, wrestling mostly in the Chicago area. When he came to work for me in Milwaukee, he was the unofficial head trainer for Windy City Wrestling and he helped to break in a lot of guys in the Chicago area. 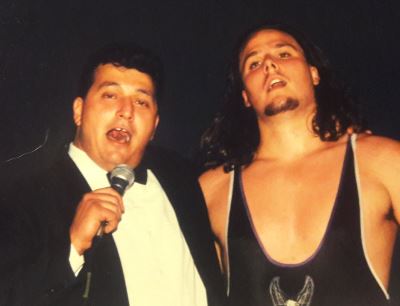 He loved the wrestling business. Former NWA World champion, current WWE agent and trainer (and fellow hep cat), Adam Pearce sums it up the best: “He was the first to teach me the art of ring psychology. He was a master manipulator of human emotion and showed me early on how to elicit the kinds of crowd responses that allow us to tell stories in the ring.”

Over the years, I booked Johnny for shows both as a singer and wrestler. He sang at Frank Sinatra Park in Hoboken, NJ, with the New York City skyline in the background. It was a groovy moment, daddy-oh! I helped him land the gig at a mob social club in New Rochelle, NY, where they held Captain Lou Albano’s roast. Instead of singing “It Had to be You,” he sang “It Had to be Lou.” Johnny had some favorite ditties he’d belt out: “Rags to Riches,” “Fly Me to the Moon” (a song he’d also sing to his opponent while slapping him in the face after defeating him), “Zoot Suit Riot” and he was even known to belt out a few KISS tunes from time to time.

You could find him swaying with all the gals in the room. “How are ya, sweetheart?” He’d say. “The name is Johnny… Gigolo Johnny.” 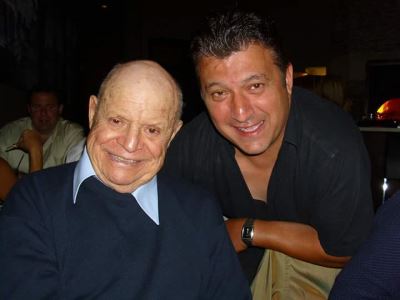 During a torrential downpour during Festa Italiana one year in Milwaukee, without a person in the audience, Johnny ran up and down the stage singing Joe Pesci’s “Why Don’t You Take Your Love and Shove It Up Your Big Fat Ass.” I was his only audience member and I was proud to be there.

We had a unique friendship. I was a friend of Mark Gallo’s, but a huge fan of Gigolo Johnny’s. In fact, I believe I was, am, and always will be one of this biggest supporters. There were times when the lines blurred between Mark Gallo and Johnny Mercedes. You couldn’t always keep the Gigolo bottled up. When his daughter Regina was born, he sang “Fly Me to the Moon” in the hospital room. To this day, that song remains the favorite of his former wife, Kathy. 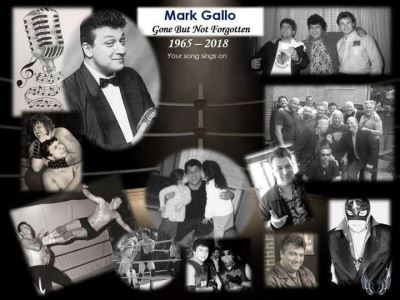 On Monday, April 30th during the time of the 53rd Annual Cauliflower Alley Club Reunion, I will be organizing a group of Johnny’s friends to gather at the Paris Casino and Hotel. From 6-8pm, one of Gigolo’s favorite fellow lounge acts and Vegas legend, Cook E. Jarr, will be playing at Napoleon’s Lounge. Every time I ever went to see “The Cook” without Gigolo, I’d put them on the phone together or have him leave a message. It never ceased to make him happy. And hey! It’s free… ya Rummies! 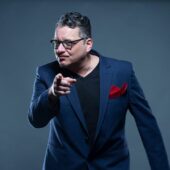