NEW ORLEANS – Bloodsport kicked off WrestleMania weekend Thursday afternoon. It was a hybrid of Mixed Marital Arts and Professional Wrestling. Victory was obtained with knock out or submission. However, the rules were unclear since a referee would take the two competitors on the ground and stand them up for seemingly no reason. 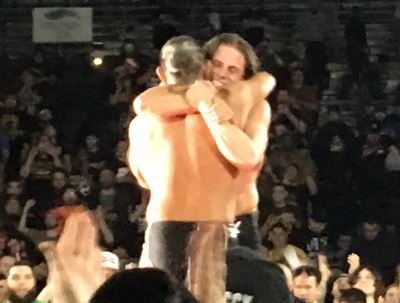 The majority of the matches happened on the ground, which was hard to see being five rows back. The main event featured NJPW’s Minoru Suzuki against Matt Riddle, which was the best match on the card since it reminded me of early UWFi matches when Suzuki was breaking into wrestling. Suzuki won the match and Riddle ended the show by thanking all the fans that came out to watch it.

Just a couple hours later EVOLVE had its show at the same building, which was outside of New Orleans in Kenner. Virgil was still tucked away in the corner signing autographs and taking picture. The Nasty Boyz and “Hacksaw” Jim Duggan were also signing and taking photos.

Will Ospreay faced AR Fox in a great high-flying match. A few days ago, it was unknown if Ospreay would compete at WrestleMania weekend due to his brutal match in New Japan. Ospreay came out with his back and shoulders taped up. I have seen Ospreay compete in the UK, Japan, and now the USA, and he was very popular in each country. 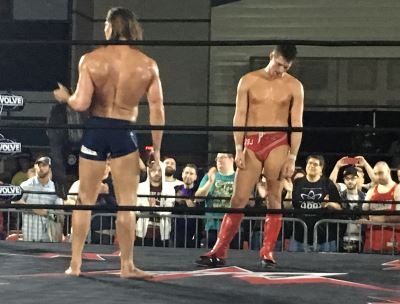 A dejected Zack Sabre Jr. after losing his EVOLVE title to Matt Riddle.

The main event featured Matt Riddle taking on EVOLVE champion Zack Sabre Jr. in a great match that used a lot of submissions. Riddle’s offense was primarily Brazilian Jiu Jitsu whereas Sabre Jr. was catch wrestling. Riddle won the EVOLVE championship and the crowd reacted with a sense of surprise and joy. Riddle thanked everyone for coming out.