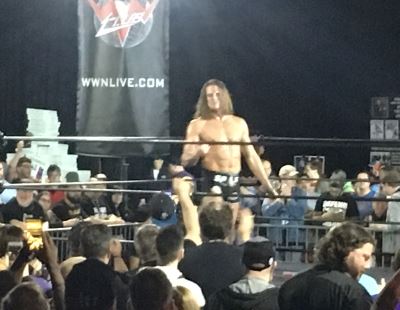 EVOLVE 103 had its second show of WrestleMania weekend. One notable match includes Jaka vs. Munenori Sawa. The crowd was into this match and it was easy to see why since Sawa had very believable and stiff offense the whole match. Sawa won by submission. Matt Riddle had a very physical match against Daisuke Sekimoto. It was great watching this match on the floor since I was able to see the little nuances of the match, and the physicality of the match. Riddle retained his EVOLVE title.

My night ended with the WWN Super Show Mercury Rising 2018. Zack Sabre Jr. defeated Sawa in an amazing match that featured many different submissions. The main event featured Matt Riddle vs. Will Ospreay for the EVOLVE title. Ospreay took a nasty looking suplex on the ring apron and referees ran out to check on him. There were people around me saying, “I don’t think that was supposed to happen.” The match continued on and Riddle defeated Ospreay to retain the EVOLVE championship. Riddle has wrestled every show that I have attended, three on Friday, two on Thursday, and they have been some of the best matches during WrestleMania weekend so far.

Joey Janela’s Spring Break 2 show was scheduled to start shortly after the WWN Super Show but I was so tired from lack of sleep that I went back to my hotel to rest up for the next day.