NEW ORLEANS – My Saturday kicked off with Progress Wrestling, which was the best Progress show that I have ever seen. However, Progress did have a list of people that were injured from previous matches during WrestleMania weekend.

Darby Allin had a concussion and could not compete at the Progress Wrestling show. Will Ospreay told the crowd that he had neck damage in his New Japan match last week, which came close to breaking his neck. Ospreay informed the crowd that he aggravated his injury the night before in the main event of the WWN supershow. He asked the crowd if he could have a fun match instead of his typical match. The crowd cheered and we got an intergender match. Ospreay teamed with Kay Lee Ray and lost against Austin Theory and Jinny in an entertaining affair. 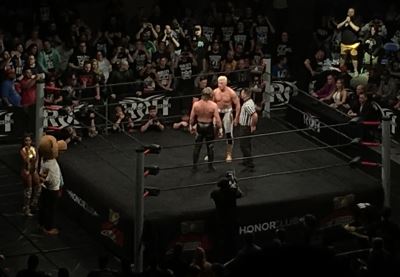 Cody and Kenny Omega finally meet in the ring. Photo by Don Davies

WALTER and Zack Sabre Jr. had one of the best matches that I have ever seen live. This match did not have many near falls. Instead they both displayed pure wrestling and the finish, which was WALTER locking in a rear naked choke came out of nowhere.

After Progress it was time to attend ROH Supercard of Honor, which was held at the UNO Lakefront arena in New Orleans. The attendance was about 6,000, which is the biggest show to date for ROH.

There was a mix of people in the crowd. There were a lot of casual wrestling fans attending this show. Punishment Martinez emerged from a coffin and people around me said, “Oh, that’s the Undertaker.” All of the New Japan stars got great reactions from the crowd, which was great yet a bit surprising given how many casual fans were in attendance and asking, “Who are these people?”

The Kenny Omega versus Cody match was the best match on the card and the one that got the loudest reaction from people. Since both men have wrestled in front of big crowds before, they were able to tell a story that could be understood if you were sitting up high. Each had great body language. However, many other matches on the card were sometimes hard to follow because of the lack of body language.

After Cody defeated Omega, many people cleared out of the arena. It was 11:30 p.m. local time when Cody-Omega ended and people were starting to burn out. Fans were loud for the ring entrances of the main event, Marty Scurll versus Dalton Castle, and the finish of the match (Castle kept his ROH World title) but the crowd was flat most of the time.