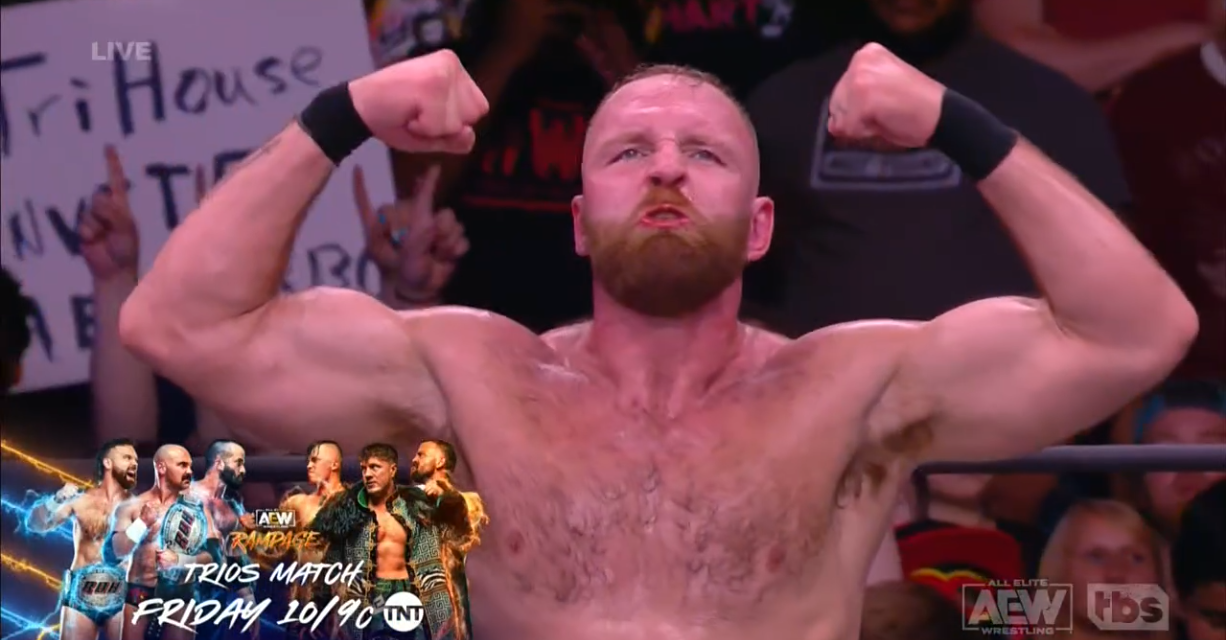 It’s been quite a week for AEW, huh? And the company hasn’t done itself any favors by sending mixed messages on how the interim AEW Champion will be decided. Tonight, the picture should become clear. There will be a battle royal, the winner of which will take on Jon Moxley. The winner of that match will move onto Forbidden Door to face an opponent from NJPW. See that wasn’t that hard. As always let’s get right to the action.

Eddie Kingston makes a bee line for Daniel Garcia and the other combatants are happy to let them go at it. Darby Allin takes out Lance Archer with his skate board and then wants some of Kingston. The fans want to see Keith Lee and Archer go at it. Lee gets Archer up and dumps him out of the ring. Even though its a Battle Royal, Max Caster feels the need to rap his way to the ring. Caster then holds a scissors party in the middle of the ring with the Gunn boys. Keith Lee takes out the Gunn boys, only to have his own parnter, Swerve Strickland, eliminate him. Could there be trouble down the line?

The Joker turns out to be Andrade El Idolo. Surprisingly, Wardlow is nowhere to be found, but Tony Schiavone tells us that we will be talking about that later, tonight. The final four comes down to Andrade, Wheeler Yuta, Kyle O’Reilly and Rey Fenix. Yuta dumps Powerhouse Hobbs out of the ring, inadvertently saving Fenix. Andrade and O’Reilly decide to team up, but they can’t eliminate Yuta. A low blow to Fenix in mid air allows Andrade a chance to dump him over the top rope. Wheeler is double teamed again, but Yuta is too feisty and back drops Andrade over the top rope for the elimination. Yuta and KOR fight on the apron. O’Reilly with a dragon screw through the ropes and Wheeler is caught. A big boot sends Yuta to the floor. Kyle O’Reilly is your winner.

Mox is admits this as been a strange year. He is ready and the Forbidden Door belongs to him. This has been three years in the making.

AEW is adding another title. The All-Atlantic Championship. There will be a four way match to crown the winner and each athlete will represent a different country.

And our participants 🔽 #AEWDynamite pic.twitter.com/FilvOhhXdc

The two trade holds and take down to start the match. A shoulder block takes down Pac, but he immediately kips up stopping Matthews in his tracks. Pac counters Buddy on the apron an DDTs him through the ropes. The two trade blows in the middle of the ring. Buddy with a block and follow with a kick combination. Pac runs into an uppercut, but then ducks a kick and gets a near fall with a roll up. Pac runs into a rising knee strike. Pac with German suplex and follows with a lariat. Buddy takes a kick to the head while on the top turnbuckle. Matthews fights Pac off, hits the sunset flip, rolls through to a Liger bomb. Pac kicks out. Matthews takes a poisonrana. Pac follows with a pump kick and goes up top. He connects with the Black Arrow and covers to get the pin.

After the match, the rest of Death Triangle run down to celebrate. The House of Black walk out on stage to pick up Buddy Matthews.

Trent Beretta is bummed because his friends aren’t around. He wants another shot at the ROH tag team belts and calls out FTR. Dash Wheeler and Dax Harwood answer the call. FTR know they didn’t lose but they also didn’t win. They are willing to fight tonight, but Beretta’s partner is over seas. Harwood tells Trent that he should be mad at Will Osprey and the New Japan boys. Well, that summoned Will Osprey, the leader of United Empire. Osprey’s minions attack FTR and Beretta from behind, beating down the three men. Beretta is sacrificed and Osprey finishes him off with the Hidden Blade.

Adam Cole joins the commentary team for this match. Finlay takes Page down with an arm bar and keeps the former champ on the mat. Hangman with a body slam and then a big boot. Page unloads with chops and sends Finlay to the floor. He nails the suicide dive and a fan shares a beer with the cowboy. Back in the ring, Finlay catches a kick and hits a chop block. Page catches Finlay on a cross body and hits a fall away slam. Hangman hits a lariat in the corner. Page connects with a power bomb, but only gets a two count. Finlay escapes the Deadeye and hits a back breaker. Finley delivers an uppercut in the corner and then hits a flying cross body. Hangman rolls through, but Finlay counter with an inside cradle. Page kicks out. Hangman hits the Buckshot Lariat and covers Finlay to get the win.

After the match, Page isn’t happy that he wasn’t in the Casino Battle Royal. It doesn’t look like he will be getting a title shot anytime soon, so he will take a run at the IWGP Champion. He challenges Okada at Forbidden door. Adam Cole tells Page that Jay White could be champion come Forbidden Door. Cole reminds Hangman that he isn’t a champion and Cole thinks he deserves the title shot.

Earlier today, AEW Women’s Champion Thunder Rosa issued a challenge to any woman on the roster. Marina Shafir stepped up.

Tony Schiavone welcomes Wardlow to the ring. He tells Tony that he opted out the battle royal because he has something else on his mind; the TNT Championship. Scorpio Sky walks out, but Dan Lambert and Ethan Page hold him back.

In @realWardlow's world, he's got his eye on one thing: the TNT Championship #AEWDynamite pic.twitter.com/ENtxcQ9xNr

Smart Mark Sterling is in the back with his clients, they AEW security staff. Sterling gives Wardlow a choice; face him in court or take on security in a 20 on 1 elimination match.

The Young Bucks are on a roll and they know it. The Hardys crash the promo, disputing that the Bucks deserve a tag team title match. Christian Cage and Jurassic Express join the party. Cage issues a challenge to both teams. A three way ladder match for the AEW World Tag Team title. Jungle Boy and Luchasaurus don’t look to excited.

Well, this should be good #AEWDynamite pic.twitter.com/boaySPWWNO

Shafir knocks Rosa into the corner and unloads with knee strikes. Rosa escapes a sleeper hold and fights her way to her feet. A clothesline takes Shafir down. Shafir with a suplex. Rosa kicks Marina to the mat and then connects with an elbow in the corner. Rosa with a drop kick to the spine and follows with one to the sternum. Shafir kicks out of the pin. Marina with a pump handled suplex. The champ kicks out. Rosa with a Death Valley Driver and Shafir kicks out. Rosa delivers kicks. Rosa counters a suplex, rolls though and is able to get a pin for the three count.

After the match, Shafir attacks the champ. Toni Storm runs in to make the save. Storm hands the belt back to Rosa, who obviously isn’t happy.

Tony Schiavone is with Jade Cargill and her entourage. Stokely Hathaway hypes Red Velvet’s match with Kris Statlander on Rampage.

The two dance around and feel each other out to start the match. Mox with a trip. O’Reilly with a kick to the hamstring. Mox takes KOR to the mat with a hammerlock. Mox looks for an armbar, but counters with a roll up. Kyle locks in an arm bar of his own. Mox starts to kick O’Reilly in the face. Kyle is able to escape to the floor and reset things. The two trade shots in the middle of the ring. Kyle kicks Jon into the corner, but gets whipped across the ring. Mox delivers a lariat in the corner. KOR connects with a low drop kick and follows with a dragon screws through the ropes. With Mox tied up in the ropes, O’Reilly drops a knee from the top.

After the commercial break, Moxley hits a superplex. The two trade strikes again, until Mox unloads with a flurry of head butts. Moxley locks in a chicken wing, but KOR breaks the hold by biting the ropes. Mox kicks the ropes and Kyle is in pain. Mox with elbow strikes. O’Reilly kicks Mox in the back. KOR fights off the underhook, but Mox knees him in the gut. O’Reilly catches Mox with a knee strike coming off the ropes. Mox goes to a knee and KOR catches him with a boot to the head. Mox hits a stunner. Kyle counters a piledriver into a sleeper. Mox escapes only to Kyle lock in a kneebar. Mox punches his way out and hits a piledriver. O’Reilly kicks out at two. The two men slap away at each other until Kyle delivers a big elbow. Both men collapse into each other. Mox applies a sleeper and transitions into the bulldog choke. Mox with the charging Regal knee and follows with the Paradigm Shift. Moxley covers O’Reilly to get the pin and three count.

That’s the show, see you in seven!

What another great show for Dynamite. The casino battle royal was fun and great kick off to the show. AEW has more then enough titles, but if every match for the All Atlantic title are like the one we got tonight between Pac and Buddy Matthews, I’m all for it. Wardlow may not have wrestled, but he cut a promo. And the main event delivered again with Jon Moxley and Kyle O’Reilly trying to earn a title shot at Forbidden Door. If you are a fan of wrestling, tonight was for you.