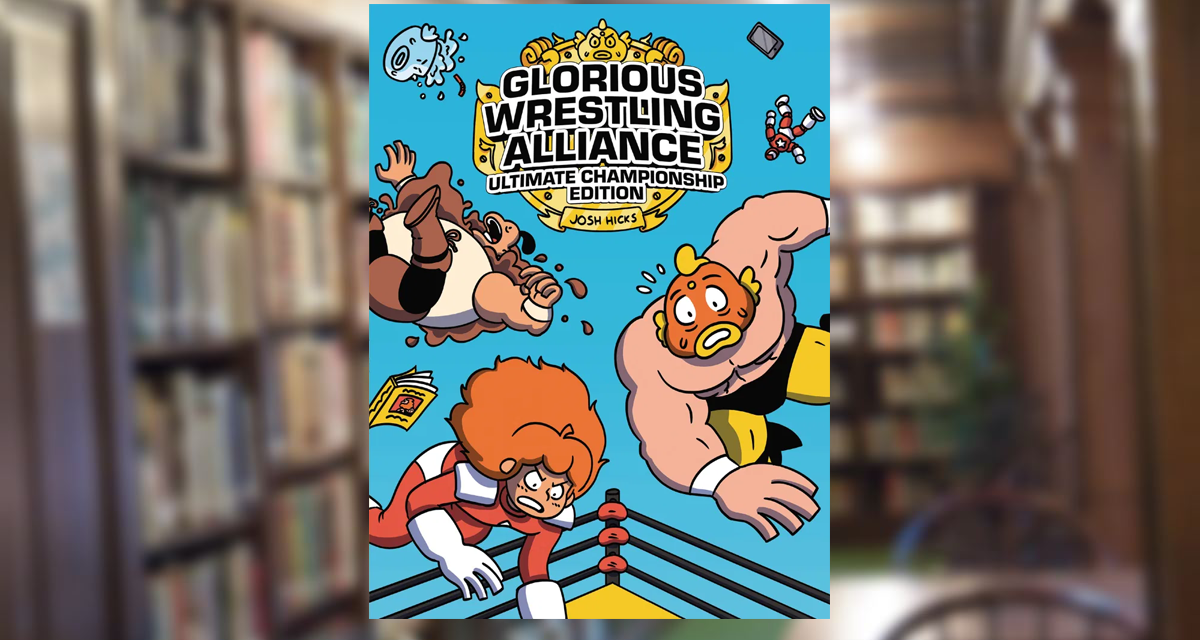 Josh Hicks’ masterful collection of comic books are now available in a vibrant graphic novel format. Glorious Wrestling Alliance: Ultimate Championship Edition, coming in October 2021 from Graphic Universe/Lerner Publishing, is a sublime homage to the theater of the absurd that pro wrestling often is. Taking up residence in this caricatured representation of the mat game, we find a cornucopia of uniquely quirky characters that will touch your heart and tickle your funny bone. The reader becomes “a fly on the wall,” taking in their introspective struggles, the dirty backdoor politics, as well as the luck and misfortunes of these diverse and often insecure personalities in and out of the squared circle. No cookie-cutter wrestlers to be found here!

Within the glossy pages of the book, we see aspects of pro wrestling satirized in every shape and form. We encounter The Great Carp who is an intergalactic fish man featured throughout, and the face of the promotion. Miranda Fury is a strong, determined female character who dons a mask and is destined for greatness. The odd-looking Gravy Train has a gravy bowl body (and it contains actual hot gravy) and is driven by the burning desire to reach the upper ranks because he does not want to be remembered as just a sauce receptacle. You also have the burly, orange-bearded Death Machine who doubles as a frustrated self-published poet laureate and claims his work in no way stereotypes him as someone who just writes about wrestling, however his poems are chock-full of grappling references. You also have a wrestler with a chicken head! What’s not to love about that? 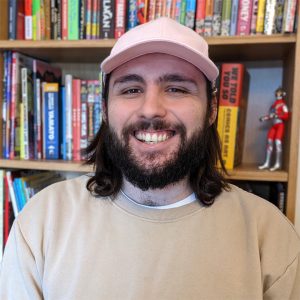 And although Hicks has not said if he’s familiar with Yoshinori Nakai and Takashi Shimada’s famed Kinnikuman (Muscle Man) manga series, there seems to be some kind of accidental similarity in some of the outlandish humor portrayed throughout. Shades of Scott Pilgrim and video game-esque references are also present. What Hicks has admitted when appearing as a guest on The Awesome Comics Podcast, is that “for the most part, it is difficult to take a full serious take on wrestling.” But while Hicks’ creation may be tongue-in-cheek, he seems to have taken serious strides to infuse his special touch of humor and quickly plunges the reader into his fun but only semi-serious world.

While there is no backstory to be found as to the origins of all these zany characters, it does not take away from the reader’s enjoyment. Lengthy expounding on where the Glorious Wrestling Alliance’s (GWA) roster came from is probably unnecessary and could have possibly hindered the flow of the story which moves along at an enjoyable brisk pace even with rather text-heavy speech bubbles.

At first most readers who pick up this graphic novel may feel a sense of bewilderment as to what is happening. But after just a few pages, you will quickly learn to accept GWA’s roster and partake in their adventures. This unusual love letter to pro wrestling is done in exquisitely crisp, colorful and cartoony detail. The story is ironic, but intelligent, and playful but never in bad taste. There is an innocence to the characters but there are good lessons throughout. The positive messages occur organically within the story and never come across as sanctimonious, snarky or mean-spirited in its delivery.

You will also find yourself appreciating the little details within Hicks’ creation as you reread panels and pause to observe and savor the care that was put into each page. While according to its Amazon listing, the recommended reading age is for teenagers aged 13-17, the target audience seems to be pro wrestling fans of all ages who enjoy immersing themselves in wrestling and respect the business, but who don’t take it too seriously either. The book never looks down upon the sport spectacle that is wrestling, and instead elevates the art in every possible way by touching upon the various aspects that make it a unique form of entertainment, but always with a generous heap of comic relief and a touch of harmless lampooning. 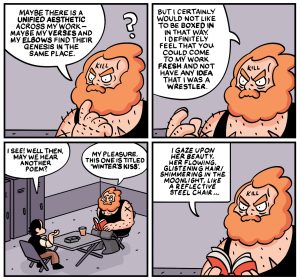 Death Machine butts up against the limits of personal experience as he aims to expand his poetry career. Courtesy of Josh Hicks.

The main story revolves around the struggling GWA under the somewhat reluctant and clueless CEO Ricky Lovett Jr., who is feeling the heat of the promotion’s failure to draw enough fans for them to not dip into the red. An example of the weirdness of the comic that awaits the reader: his father Ricky Lovett Sr. who is in a life-support unit, still has enough energy in him to tell his underachieving son by means of a little printed paper, “You are a colossal disappointment.” And many years prior to being confined to his life-support capsule, Lovett Sr. made his son promise him that he’d carry the torch and “put on the best goddamn fake-fightin’ exhibition that the universe ever saw.”

Throughout the book, the multiple wrestler story threads kept me turning the pages, wanting to learn more. This pleasurable read was never a struggle as many of the characters grew on me. The transition of switching between the happenings inside the ring and the wacky lives of the wrestlers behind the kayfabe (presenting pro wrestling story lines as real) curtain felt very natural and flowed quite well. Some of the characters are more well-developed than others, but they are all aesthetically interesting to look at and radiate charisma. As mentioned before, humor is spread all throughout Glorious Wrestling Alliance: Ultimate Championship Edition and this is where the book truly shines. Once you’re done reading, you’ll want to read it again and later wish there were action figures available for purchase like there were during the book’s initial Kickstarter campaign which Hicks made himself with varying results and possibly some strange reaction to the chemicals involved.

But for now, I’d be content with a part two of these collected comics that continue the adventures of the “universe’s least-professional wrestling company.”  The various characters scream to be made into spinoff works and opportunities for future merchandising should be there. I foresee a glorious future for this property. If you want to take a break from conventional wrestling and want your wrestling with a twist but still somewhat based in reality, then Glorious Wrestling Alliance: Ultimate Championship Edition should be on your list of purchases. 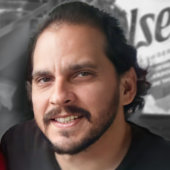 Javier Ojst is an old-school wrestling enthusiast currently residing in El Salvador. You can read his work at ProWrestlingStories.com and also on PopCultureRetrorama.com. He has been a frequent guest on several podcasts and has been published in G-FAN Magazine. You can contact him at jojst1@gmail.com for involvement in future projects.