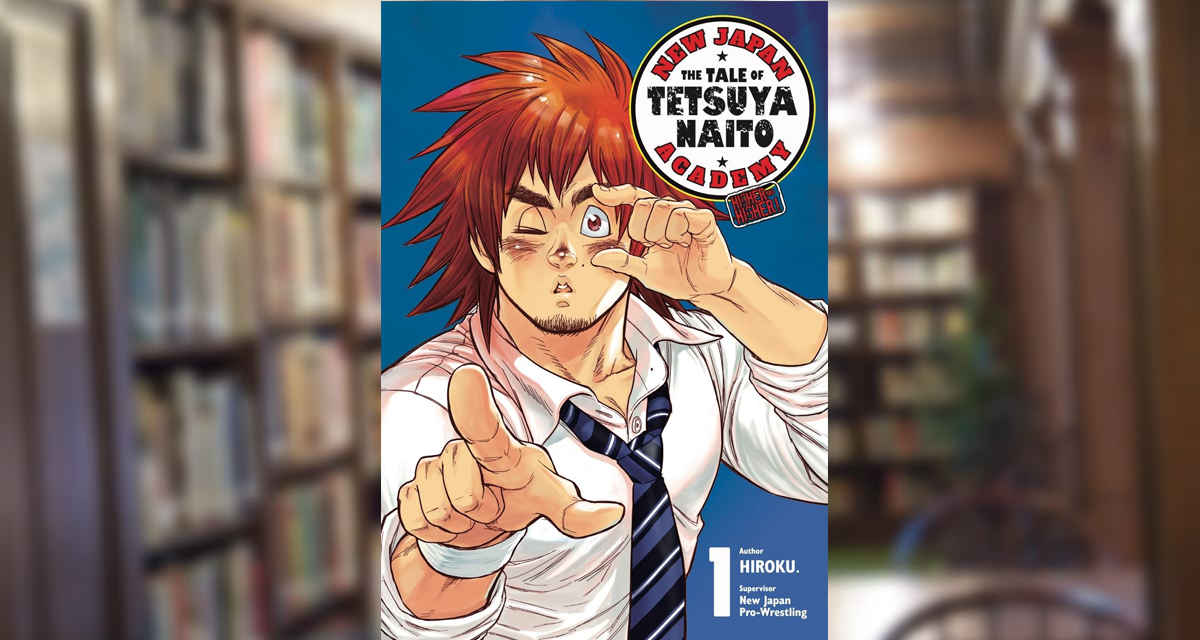 Tetsuya Naito, New Japan Pro-Wrestling’s (NJPW’s) International Wrestling Grand Prix (IWGP) Heavyweight and Intercontinental champion, has gone through an incredible and storied struggle in his career. And that story has now been captured and transformed into an otherworldly story thanks to author HIROKU and publisher Yen Press, in a cross promotion with Lucha Masks, with their newest shonen manga New Japan Academy: The Tale of Tetsuya Naito. (EDITOR’S NOTE: Shonen refers to manga marketed towards males between the ages of 12 and 18).

In it, Naito tells the story of how he went from being a generic goodie-two-shoes hero to the detached, tranquilo “bad guy” he is today. And the manga does an amazing job of telling this story with a perfect balance of well-drawn characters, simple-yet-effective narrative speech bubbles providing context, smooth action sequences, and compelling dialogue.

New Japan Academy takes place in an alternate universe in which Naito and his fellow NJPW wrestlers are transported into the highly romanticized world of Japanese high school life. Except in this world everything is centered on pro wrestling, and all the characters even wrestle in their school uniforms. There are no elaborate entrances drawn here; but there are promos that cover a lot of subjects in a short amount of space. 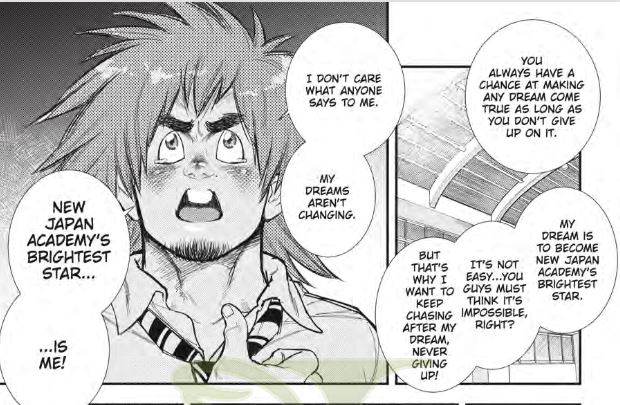 Naito proclaims his dream despite wrestling with a bad knee and no painkillers. Photo courtesy of HIROKU & Yen Press.

The bulk of the story is one big flashback, a retelling of Naito’s story through the lens of a first-year student looking to achieve his dream by beating his upperclassman Hiroshi Tanahashi and capturing the IWGP Heavyweight Championship. But naturally, the manga, just like real life, is filled with twists and turns that complicate Naito’s goal and forces him to make drastic changes in his life.

The main story in this arc mirrors what happened to Naito in NJPW between February 2012 and his excursion to Mexico in 2015. Manga Naito is a plucky, never-say-die hero that wants to achieve his dream and become IWGP Heavyweight Champion as a first-year. He wants to bring then-champion Tanahashi “down from his pedestal” and become the brightest star in the school/promotion. And he proclaims these things loudly, over and over again, to anyone and everyone, whether they want to listen to him or not.

But his dream is dashed by a returning Kazuchika Okada who, just like in real-life New Japan, defeats ace Tanahashi in a stunning upset. Then, Tanahashi defeats Naito in the New Japan Cup, and after running his mouth one time too many, Okada challenges Naito to a sudden fight and obliterates him. Naito is left embarrassed but, like any shonen story centered on martial prowess and intense action, he vows to keep improving himself and shows incredible self-sacrifice in wanting to achieve his goal.

“The thing about dreams is that the further away they are, the brighter they shine,” fellow wrestler Hirooki Goto explained while consoling a devastated Naito.

Despite these setbacks, Naito doesn’t give up his dream and remains convinced that beating Tanahashi is still his destiny. But by the ninth chapter, Naito’s situation gets even more complicated. He develops a secondary goal of mentoring a new trainee named Hiromu. Kota Ibushi arrives at the school (he wears their school uniform despite not being a student there) and shocks Naito with his incredible speed. Katsuyori Shibata returns and immediately becomes a top threat. And then Naito tears his ACL and gets stretchered out of the arena after his former partner Yujiro Takahashi all but destroys that knee in a match. 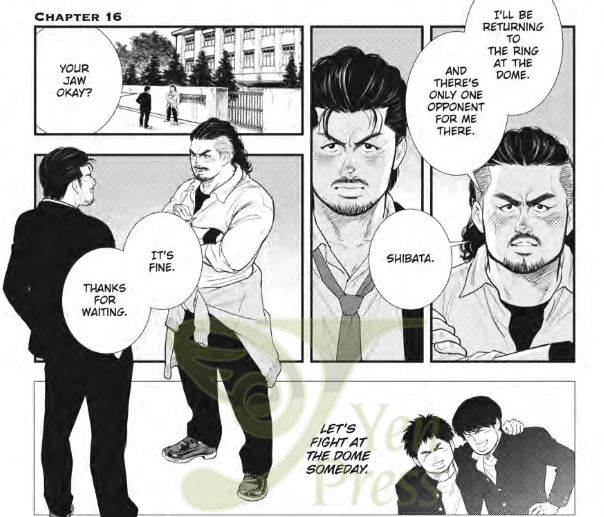 In less than a page, an interesting story between Goto and Shibata is built up. Photo courtesy of HIROKU & Yen Press.

Still unwavering from his dream, Naito enters the G1 Climax tournament. Despite wrestling with a bad knee and refusing to take painkillers, Naito keeps going hoping the fans (represented as his non-wrestling schoolmates) will still follow him. But, just like in real life, they turn on him and eventually vote him out of the Dome main event. That illustrious spot goes to Tanahashi facing off against “CHAOS’s general” for the IWGP Intercontinental Championship (which happens to be Shinsuke Nakamura who, disappointingly, is not portrayed in this manga). Following this, Naito continues to lose as other wrestlers like Ibushi surpass him as the fans continue to reject him. Faced with no other option, Naito leaves New Japan Academy for Mexico, unsure of when or if he’d return.

The digital version of this story also includes a copy of October 10: The Day of Destiny, a short story based on the 12th anniversary of  Tanahashi’s NJPW debut. That short is what inspired HIROKU to write the complete New Japan Academy story. Like the above main story, this one captures how Naito almost beat Tanahashi in 2011, with excellent narration and small speech bubbles that give quick yet critical explanations as to who the characters are and what drives them. 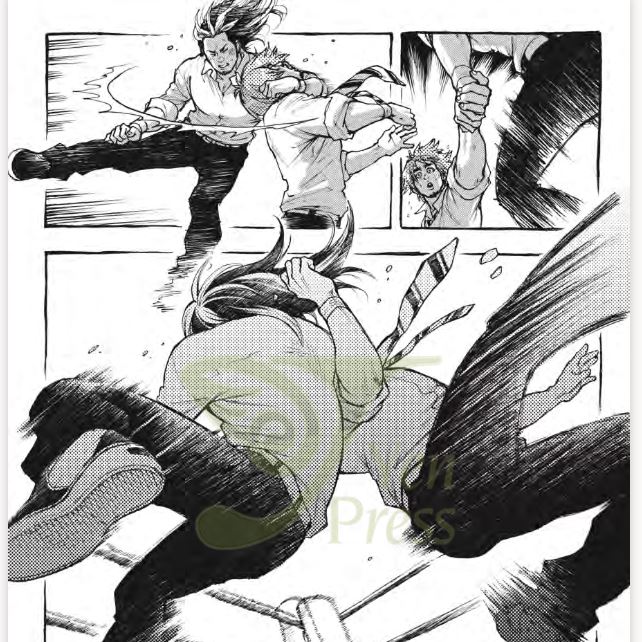 The story ends with an exclusive interview with both Naito and HIROKU. HIROKU talks about the process of bringing real-life wrestling characters to the shonen style of manga, and mentions that the easiest part was putting together the actual narrative. The story of Naito the underclassman wanting to beat the heroic senior Tanahashi was the perfect fit for that style of manga. The bigger challenge was illustrations, though Naito admits that the way Hiromu’s facial expressions were drawn were perfect given how he expresses himself in real life.  And throughout the main story, several tertiary stories are introduced to give the setting more life and variety. But these additional side stories, like the one between childhood friends Goto and Shibata, don’t exist in a vacuum. Rather, they’re introduced as important elements to the story because they add context to Naito’s main story and complexity to Naito’s growing list of challenges.

All in all, this book is a fantastic read for both existing pro wrestling fans and those new to it. The visual panels do a wonderful job of complementing the story told in narration and text bubbles, moving the story forward in a seamless, easy-to-follow way. With pro wrestling, it can be hard to follow along with some stories, especially as it’s usually up to the commentators to tell fans the meaning behind something. Here, the reader is taken into Naito’s mind and sees things as he does. Although this story is clearly an exaggerated representation of Naito and his friends wrestling in their school clothes, the deeper stories are all real ones plucked from NJPW’s own storylines and interviews. From Naito wanting to beat Tanahashi, to his devastating knee injury, to the fans booing him and setting up his second foreign excursion, all of these are based on actual occurrences that happened to Naito the pro wrestler.

Just make sure you don’t read this book as an American comic (left to right) but as a manga (right panel to left). Otherwise you’ll end up very confused by the unusual panel progression.