‘Purodyssey’ a fascinating look into Japanese wrestling and culture

For most people, the New Year’s season is a chance to celebrate the coming year, party in the streets, and watch elaborate fireworks shows. For John Lister, a freelance pro wrestling writer with over 20 years’ experience in the industry, it was a chance to do something so crazy it would make even the most determined of wrestling fans raise their eyebrows: see seven wrestling shows in seven days during one of the busiest wrestling periods in one of the busiest cities in the world. 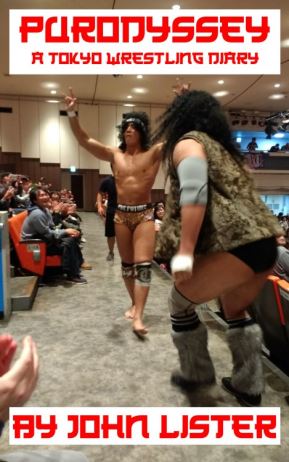 Not only did Lister accomplish this, but he actually got more than what he bargained for. All of his experiences and adventures were recorded in his recently-released book Purodyssey: A Tokyo Wrestling Diary. This book chronicles Lister’s experiences in Tokyo during the last days of 2017 and the first week of 2018, as he sought to attend seven wrestling shows in seven days, culminating with New Japan Pro-Wrestling’s flagship event, Wrestle Kingdom.

This wasn’t something he just came up with out of the blue; it was based on an article from a magazine called Sports Review Wrestling titled, “Are you a real wrestling fan? Grade yourself with our 38-point checklist.” That list, which reads like the kind of listicle you’d find on Buzzfeed or shared on Facebook, included some easy and generic goals like “go to a costume party dressed as a wrestler” or “sit front row at an independent show.”

Many fans have done these easy things, but one of the hardest goals on this list was to see seven different shows in seven days. Lister had tried to finish this goal while visiting the United States (Lister is from the UK, as seen by almost all of his cost breakdowns using the English pound as reference), but only ever got as high up as five shows in seven days. Realizing that it was futile to try this in the U.S. he decided to try his luck in Japan.

The book is short, containing only 68 pages of text. Of these pages, the first 42 describe his stay in Japan and the things he witnessed. Lister breaks down his book by day, beginning on December 29, 2017, and ending on January 5, 2018. Here he provides vivid descriptions of places, people and food that one can expect to find in Japan’s biggest city. Indeed, the book provides great advice not just for wrestling fans visiting Tokyo, but for tourists in general. These tips and insights make his book feel more like a useful guide to Tokyo tourism than simply a journal and summary of one person’s experiences.

Because of the main topic of the book, Lister doesn’t go into great detail describing the venues, matches and stories presented at each show. He does mention how he bumped into wrestlers like Colt Cabana and Zack Sabre, Jr. outside the ring, which only adds to the authenticity of his experience in Japan.

That said, if there’s one theme that’s present in reading Lister’s firsthand account, it’s that wrestling in Japan is almost schizophrenic. Lister attended 14 wrestling shows in seven days, with these promotions and matches ranging from traditional and sports-centric (All Japan, New Japan), to crazy hardcore deathmatches (Big Japan), to the comedic and wacky (DDT shows) to the downright ridiculous (Gatoh Move, 2-Cho Pro Wrestling). Despite wrestling being still being presented as more of a sport and athletic contest than its American cousin, Lister’s book demonstrates that puroresu has its niches and taste for the ridiculous as much as the weirdest American promotion.

The craziest things Lister witnessed in Japan include: a show by women’s promotion Gatoh Move that featured wrestling matches without a wrestling ring; a 16-team tournament composed of teams that were thrown together at random just for one show (such as the team of Danshoku “aggressive pervert” Dino and Daichi “straight-laced” Hashimoto); ten matches in four days involving a wrestler named Hideki Suzuki; and a women’s pro wrestling show that included in its message to fans the line, “also, please be a woman.”The book then transitions into an 11-page list of tips for booking your own trip to Tokyo (wrestling-focused or otherwise). He includes detailed answers to popular questions regarding such a trip, including costs, transport in Tokyo (along with which stops to get off at for your favorite wrestling shows), how to survive with the obvious language barrier, and even gets into the nitty-gritty of traveling by offering firsthand advice for things such as dealing with jet lag, voltage adapters, and the fact that credit cards won’t get you very far in cash-centric Japan.

He also name-drops a service called “Japanican” which books tourist activities. The site is very user-friendly and it itself an excellent resource for anyone booking a trip to Japan and wanting to learn what to do and find discounted tickets.

Lister also does a great service to wrestling fans by providing direct URLs for the sites to buy tickets for various promotions in and around Tokyo. As of September 2018, all of the URLs he listed work perfectly, though a translation extension will likely be needed for those that cannot read Japanese.

The final 15 pages highlight the results of each wrestling show he attended, including venue, promotion and attendance figures. This section is more for recording purposes, but it does give you some additional insight into wrestling in Japan as well. NJPW’s Wrestle Kingdom 12 event was easily the biggest show with almost 35,000 people in attendance. Meanwhile, most of the smaller shows had between 1,000 and 1,500 people for them.

Perhaps the only attendance figure that really stands out is the Gatoh Move show (i.e. the one without the ring), which only had 76 people, yet was still deemed “super crowded” by the promotion staff.If going to Japan either as a wrestling fan or as a tourist seems like too much of a challenge for you, it is highly recommended that you pick up Lister’s Purodyssey: A Tokyo Wrestling Diary. Not only will it give you excellent advice for visiting Tokyo based on firsthand experience, but it will also provide you with critical and direct tips for getting around in one of the biggest and busiest cities in the world.

Lastly, while the book is short and void of any photos beyond its cover page, Lister does include a link on one of the first pages to an online gallery that corroborates everything he describes in the actual book.