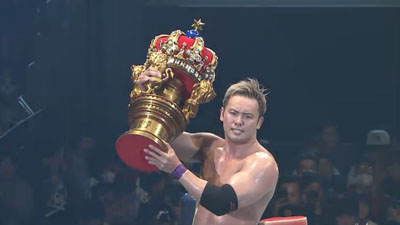 Kazuchika Okada has defeated SANADA in the New Japan Cup finals and will go on to challenge Jay White for the IWGP heavyweight championship at the G1 Supercard at Madison Square Garden on April 6th.

Okada locked in a headlock to take SANADA to the mat. However, SANADA was able to gain the advantage by putting Okada into the Paradise Lock and released it with SANADA delivering a dropkick. Okada worked over SANADA’s neck in the middle of the ring. SANADA shot Okada into the ropes and dropkicked Okada to take advantage in the match.

SANADA performed a rolling senton onto Okada to the floor. However, when the match returned to the ring, Okada hit a DDT to gain the advantage in the match. Okada hit a neck breaker for a near fall. Okada attempted the rainmaker, however, SANADA was able to hit a dropkick in desperation.

The match went to the outside and SANADA received a DDT on the floor. SANADA was close to being counted out. Okada was able to dominate SANADA since so much had been taken out of him on the outside. SANADA hit a tiger suplex out of nowhere for a near fall.

IWGP Heavyweight Champion Jay White came out and had words with Okada as The Rainmaker basked in his historic win.

“It is too bad that your efforts will be for nothing. You cannot beat me. You have never beaten me and you never will especially not for THAT belt,” said White pointing to the IWGP Heavyweight Championship.

While not officially the main event, the real main event of the night was Juice Robinson versus Chase Owens. The US Champion (Juice) has been champing at the bit for a chance at the IWGP title while Chase Owens seeks to deny his fellow American the opportunity.

Juice wasn’t playing around when he tied up his ponytail and went straight for the ring. Chase called for time and Juice went in for the kill, ignoring Jado.

Chase got a sick punt on Juice and drove him into the ring post. The champion was in trouble. Owens locked Juice in a vice grip to cut off the lungs. We’re less than 5 minutes into the match and Chase wants to end this quickly.

A few kicks to the head lets us know what Chase Owens thinks of his partner. Juice tells him to keep up the punishment.

Juice faces the punishment and comes out the winner with a nasty chop. Unfortunately, Jado hits Juice with the kendo stick and gives his Bullet Club member a heads up. Juice is in big pain now.

Juice denies Chase a suplex, he hits Chase with a dirty suplex onto the ring barricade and takes control. We’re now at the 10 minute-mark.

Red Shoes is about to start the 10-count but Juice stops it. The commentators say this is him dealing with a lot of mental issues and with him taking over the US title at Wrestle Kingdom 13. I can’t argue that.

Chase hits a knee strike to give him the leverage in the match. That gives Owens a chance for the Jewel Heist but no piledriver chance. Owens can’t hit the piledriver and Juice powers out of it.

Juice calls for the Cannonball, hits it, but can’t turn it into a pinfall. A very nasty chop allows Juice to hit a Superplex. He goes for broke and hits it. Juice goes for suplex No. 2 and converts a Jackhammer. We’re at the 15-minute mark now.

The piledriver is cancelled and Juice goes for a Boston Crab. Owens taps but Jado focuses the ref so the call doesn’t happen. We get a block and Jado plays defense perfectly. Owens tries to play defense but eats a forearm for his effort. Juice sees Jado, takes a Kendo stick and goes to town on the Playmaker. Juice steps on the kendo stick and unloads on Jado.

Juice hits 3 strikes before breaking the Kendo stick but suffers an eye powder strike. Owens hits a double-knee gutbuster but can’t get the 3-count. Juice is still alive!

Package Piledriver at the 20-minute call doesn’t happen. Juice hits a left-handed strike and hits a powerbomb of his own but no 3-count thanks to Jado pulling out the ref. This brings out Bad Luck Fale to spear him and give his fellow Bullet Club member an additional chance.

Owens holds the U.S. title but can’t hit Juice with the belt. Juice clocks both men and hits Pulp Friction for the win!

Zack Sabre Jr. & Taichi defeated Hiroshi Tanahashi & Will Ospreay when Taichi delivered a low blow on Ospreay followed up with a pin.

Yuji Nagata & Manabu Nakanishi defeated Yota Tsuji & Yuya Uemura via submission with the Nagata lock from Nagata and a backbreaker from Nakanishi.