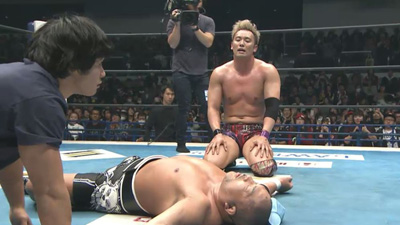 It will be Chaos against Los Ingobernables de Japon as Kazuchika Okada will face Sanada in the finals of the New Japan Cup tomorrow.

On the line is a match against Jay White for the IWGP Heavyweight Championship at the G1 Supercard at Madison Square Garden on April 6th.

In today’s Semifinals it was Tomohiro Ishii against Kazuchika Okada and Hiroshi Tanahashi versus Sanada.

Kazuchika Okada barely squeezed by a human tank in Tomohiro Ishii who completely battered him to the core. At one point even Okada’s Rainmaker finisher just bounced right off Ishii’s chest.

A drop kick to the back of the head did not faze Ishii. He popped right back up growling and ready for more punishment. A shotgun drop kick dazed Ishii though. Okada barely kicked out of two decapitating clotheslines from Ishii. A jumping Tombstone Piledriver and a Rainmaker Clothesline pinned Ishii.