BUFFALO, NY – Kofi Kingston appeared on the entrance ramp and the crowd went ballistic. The ultra-popular Kingston held a tray of pancakes aloft. If there is anything I have learned from watching the New Day at live events is that someone always gets hurt when they toss items in to the crowd.

A mere two years ago I watched as a box of Booty-O’s left Big E’s hands and knocked a young child to the floor. What would happen at this Sunday afternoon Smackdown house show at the KeyBank Center in Buffalo, New York? 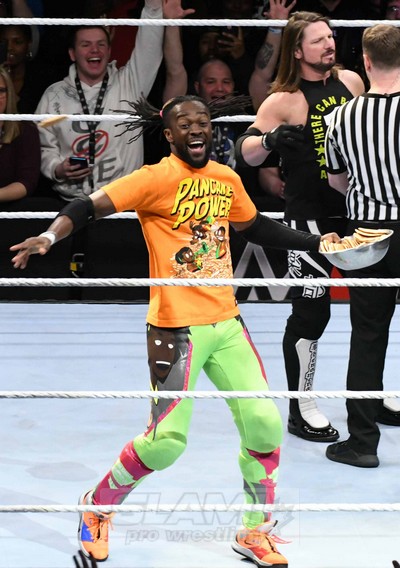 The answer, intrepid reader is that Kofi Kingston sure can throw a pancake. I was sitting in the lower bowl section of the Key Bank Center in Buffalo and soon a pastry disk was flung my way. The pancake deflected off of my hand and bounced off of the rim of my drink. At that exact moment a teenage boy who was sitting in my row took flight and dove towards the prized pancake.

In a split second, the young man’s chest landed in my lap as he flailed for the pastry. From there he vainly searched for the oval goodness on the dirty floor while draped across my legs, only to hear a child one row ahead of me proclaim that he had the pancake. That did not stop him from pulling out his cell phone so he could turn on its light and examine the floor as I repeatedly told him that the pancake had been claimed.

I have had many weird things happen to me at wrestling shows but I have never had a person throw themselves on to my body in order to get a pancake. What will happen to me next?

The WWE show was hot and the crowd loved every minute. I found the audience to be emotionally and I mean very emotionally involved in the matches. With Wrestlemania only two weeks away I think it is safe to say that the fans are ready for the big event. 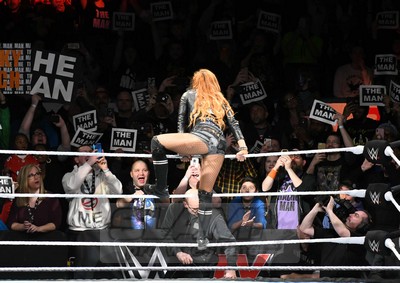 “The Man” Becky Lynch plays to the crowd.

Buffalo had a crowd that was mostly comprised of children and parents. Those kids were vocal and were perfect fans. I found it so interesting that there were many fans wearing Becky Lynch “The Man” shirts. As a long-time wrestling fan I must admit that I have never seen a female grappler take the stage with such a commanding presence. Not only that, she is a heck of a wrestler.

Another wrestler the crowd appreciate was AJ Styles. They cheered for his every move in and out of the ring. Perhaps the biggest reaction of the night went to Kofi Kingston, with or without his tray of pancakes.

Every time Kingston fought back against the evil duo of Rowan and Daniel Bryan the crowd rallied behind the high-flying superstar. There is no doubt that the WWE universe loves Kofi Kingston. 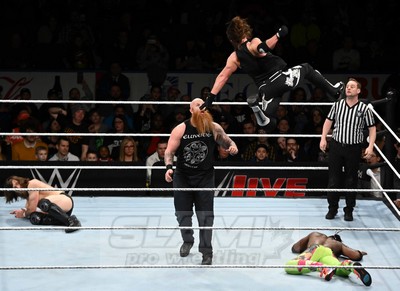 The event was a fun night of wrestling as the crowd was vocal and cheered for the good guys while booing the bad guys. It was a night as the fans went home happy with the main event featuring AJ Styles and Kofi Kingston defeating Rowan and Daniel Bryan. 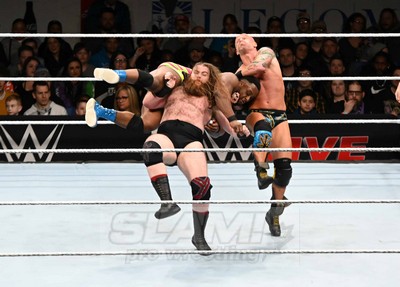 In other matches Xavier Woods and Big E — without pancakes — defeated Eric Young and Killian Dain in a match I would describe as working smarter, not harder. The young people in the crowd loved the New Day duo. 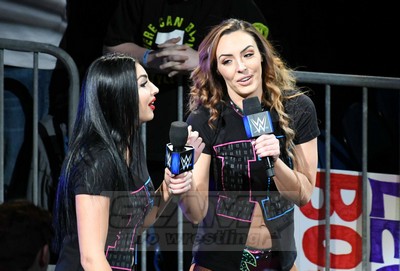 Billie Kay and Carmella took to the mat next and it was not a very good match. If they were artists I would say Carmella made art with scented markers while Kay created with crayons. Kay got the pin on Carmella with help from her Iconics tag team partner. 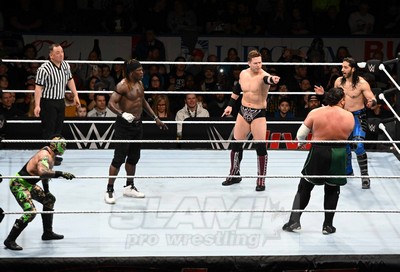 Samoa Joe put up his United States title against R-Truth, Mustafa Ali, The Miz and Rey Mysterio. The crowd was certainly enjoying Joe’s verbal tirade against the local Buffalo sports teams. When he besmirched the good name of the Buffalo chicken wings, well, the crowd let him know they were not happy. The match was quick paced and hard hitting. Joe kept the title when he pinned R-Truth. 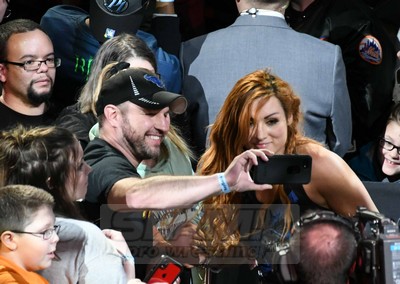 “The Man” Becky Lynch poses with a fan.

Charlotte Flair faced off against Becky Lynch in a really good match. The crowd was split with their reaction to Flair. They want to like her and they want to hate her. Flair is on the cusp of being the most hated player in the game. I reflected on the journey that these two athletes have taken. The audience has watched them evolve over many years and the two of them are just finding their true characters. Lynch got the win with an arm bar submission. 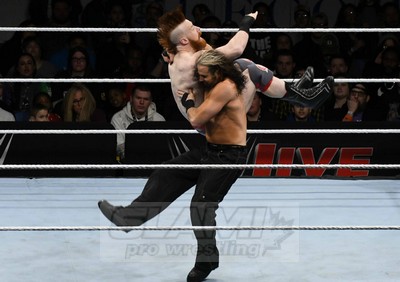 In a match many years too late we saw the Hardys beat the Bar. I have to admit that it was like watching two old wrestlers moving in slow motion against the younger team. The crowd loved the nostalgia of seeing the Hardys wrestle, but they are not the Hardys of old. One person in the crowd remarked that they might be this generations Rock and Roll Express who kept hanging on for way too long. 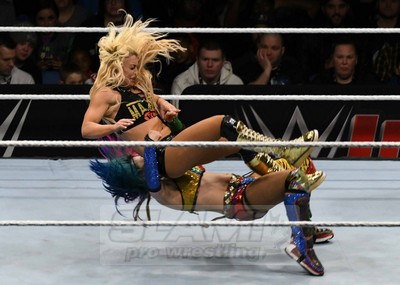 Mandy Rose showed that she is the next technical marvel and top performer of the Smackdown women’s division as she took on Asuka. It seemed as if Rose kept switching gears throughout the match and really put the heat on the women’s champion. In the end Asuka won with a submission.

This show in Buffalo showed that the Smackdown brand can carry the WrestleMania card. I just hope that Kofi Kingston doesn’t throw any more pancakes.

Caleb Smith enjoyed the show and having Kerry Felstead and Sam Cino on board. He is in no mood to have pancakes anytime soon.