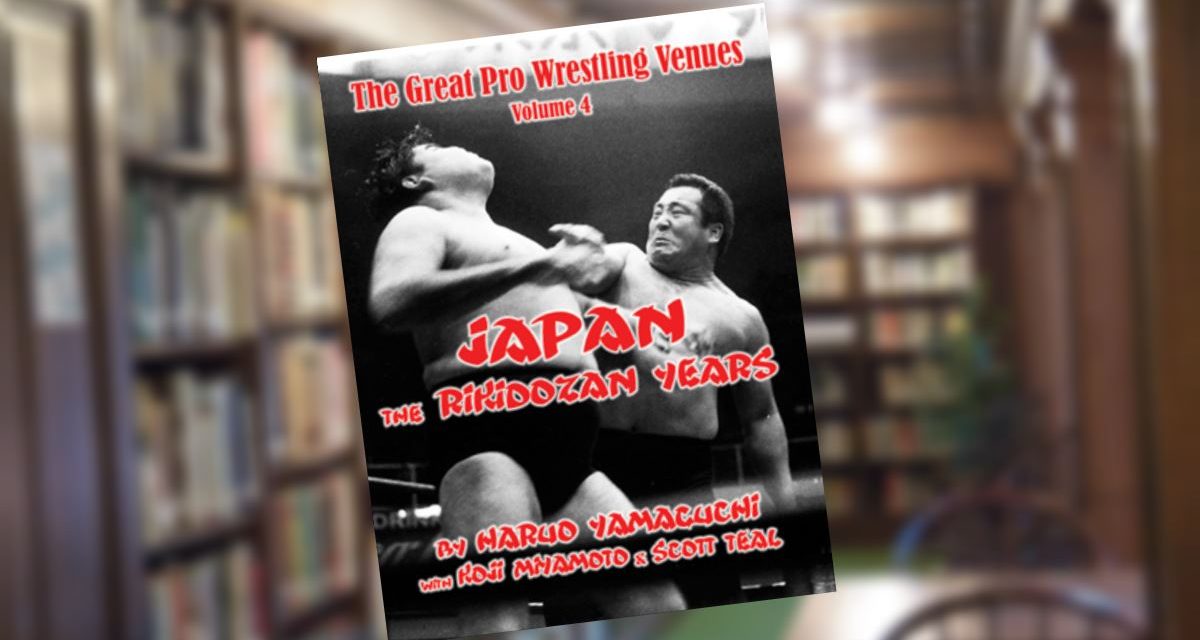 I’m not a results guy, and have never really been consumed by the collection and analysis of results from pro wrestling matches. Yet, as a historian, I absolutely value that there are people out there who collect and share results. The wrestling world is richer because of their work, and it ends up helping me, as I consider myself primarily a collector of stories from wrestlers.

Which brings me to The Great Wrestling Venues, Volume 4 – Japan: The Rikidozan Years, which came out in 2019 from Crowbar Press. I was fortunate to get my copy in person in Nashville, from publisher Scott Teal in February, before the COVID-19 pandemic began.

The Rikidozan Years is the work of Japanese historians Haruo Yamaguchi and Koji Miyamoto, with Teal adding his contributions and masterfully pulling it all together in a fascinating, readable collection of both results from 1951 to 1963, but also a good variety of background material, clippings, and especially, photos.

With New Japan Pro Wrestling one of the hottest, most respected promotions in wrestling today, this is an incredibly valuable resource to understand the origins of professional wrestling in Japan, and how it grew, primarily through its top star, Rikidozan.

Like Gorgeous George in the United States and Whipper Billy Watson in Canada, Rikidozan’s timing was perfect to become an iconic figure. Post-war Japan was trying to get back on its feet, and television was gaining access to Japanese homes.

“In a way, Rikidozan was a child of his era,” the authors note in the book. “More than likely, if he had appeared in a different time period, he would not have become a national hero, and if he had not laid down the groundwork for pro wrestling in Japan, the sport may not have taken root as deeply as it did. In the ring, he was a master showman and demonstrated skills far beyond those of anybody else.”

Rikidozan’s North Korean heritage — his real name is Kim Sin-rak — was kept secret from the general Japanese population until two decades after his death in 1963.

With Rikidozan at the centre of the story, Yamaguchi and Miyamoto take the readers through the first attempts to promote western-style pro wrestling in Japan, to the formation of the Japan Pro Wrestling Association, which ruled the roost until 1972, when two of its wrestlers, Antonio Inoki and Shohei “Giant” Baba, split off to form New Japan Pro Wrestling and All-Japan Pro Wrestling respectfully.

Of course, that’s the simplified version of things. To these gaijin (foreigner) eyes, it was quite the education reading The Rikidozan Years. It taught me plenty of things and dispelled myths.

The behind-the-scenes maneuvering by various players in the promotion, and the small competing companies, was enlightening, and so many tiny tidbits added to the experience:

The Rikidozan Years is primarily a results book, as described in its promotional material:

If you’re a fan of Japanese pro wrestling, this book is a unique and invaluable resource — a comprehensive account of the origins of the sport in Japan and every known match between Sept. 30, 1951, and Rikidozan’s death in Dec. 1963. In addition to the 978 shows covered, we present details surrounding the matches, the talent, and the promotion, and the matches are brought to life with more than 300 rare photos from the collection of co-author Koji Miyamoto.

From that aspect, it’s quite complete. There were times I wanted to know more about the wrestlers themselves, but then that would be a different book. A bonus was learning quite a bit about Yamaguchi and Miyamoto; how their fandom developed and the wrestlers they got to know well along the way. (Fun fact: Lou Thesz attended Miyamoto’s wedding).

Besides the results, the other draw is definitely the photos. Aside from the many photos of Rikidozan, from his early days to his funeral, there are plenty of images to study: Japanese wrestlers you may not be familiar with; young stars North American fans know like Shohei Baba, Antonio Inoki, and Hiro Matsuda; gaijins touring Japan and visiting tourist destinations; in-ring action; training shots and press conferences.

The Great Wrestling Venues, Volume 4 – Japan: The Rikidozan Years truly is an education, and with the proliferation of wrestling books in recent years, no higher praise can be given that that.