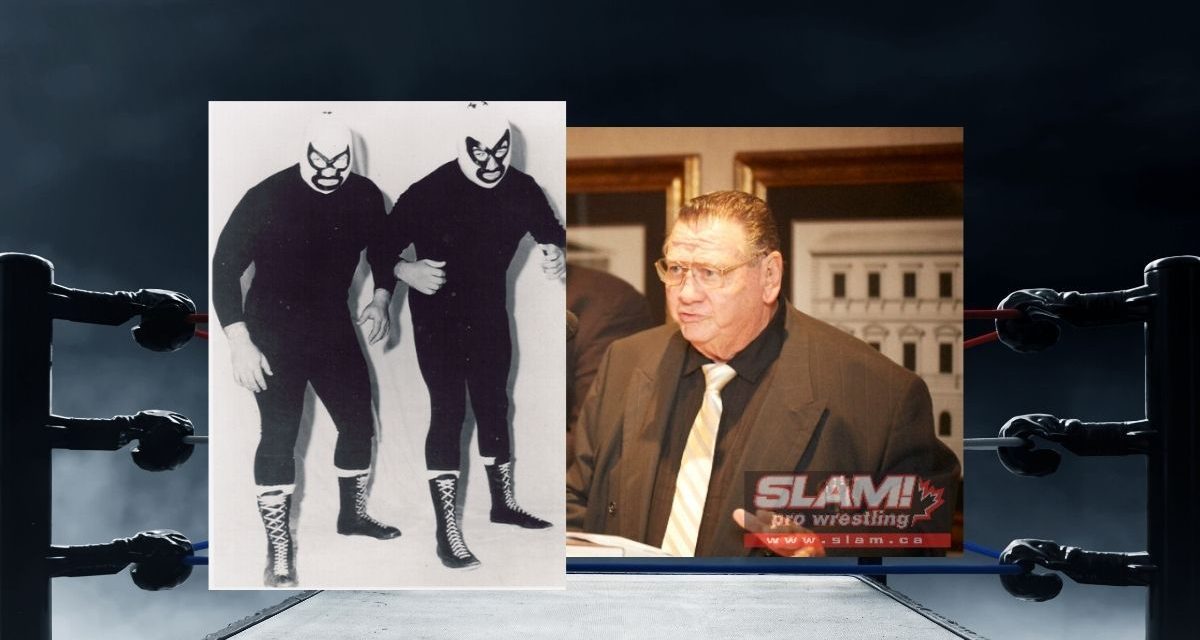 Where do you start in recalling the life of Jody Hamilton? The mask? But which one, the Assassin mask? Or the Bolo? Do we talk about his role as a trainer, operating WCW’s famed Power Plant? Or as a promoter of the WWE-affiliated Deep South promotion? With his death on August 3, shortly after entering hospice care for failing health, it’s important to touch on them all.

Joseph Hamilton was born on August 28, 1938 in St. Joseph, Missouri. He was the younger brother of Larry Hamilton, “The Missouri Mauler,” and followed his brother into pro wrestling in 1956.

In an interview with this writer, Jody said that Larry “helped me a lot, worked out with me” but that it wasn’t easy by any means. “They put me through the same type of hell they put my brother through. When I was 16 years old, I was out on the goddamn carnival challenging people to come on up, taking on all comers out on the carnival, boxing or wrestling.”

He was taking in the education on those Athletic Shows for Gust Karras Promotions. “You learned damn quick how to protect yourself, how to take care of yourself,” said Hamilton. “I learned at a very early stage of my career how important conditioning was.”

Hamilton told Steve Johnson that he had other options. “I knew wrestling was what I wanted to do. I had opportunities to go to college and play football, and boxing, and so on and so forth. But wrestling was always the itch that needed to be scratched. Down through the years, even though wrestling has changed a good bit to what it is today, from what it was back in my era, I’m still amazed at the amount of people that come up to me, and they’ll tell me stories.” 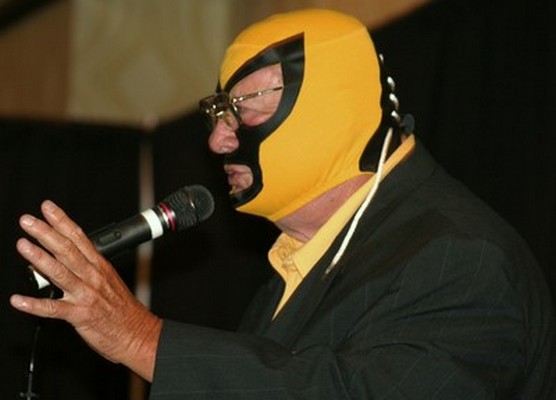 The Assassin Jody Hamilton at a fan fest in 2011. Photo by Mike Andrews

At a fan fest, circa 2011, an old classmate approached Hamilton. She had done a documentary on him in high school when she was only 14, and got a college scholarship because of the documentary.

A solid amateur boxer, who fought at 157 pounds, and went to the finals of a national tournament, Jody was at 19 the youngest wrestler in history to co-headline Madison Square Garden when he and his brother fought Antonino Rocca and Miguel Perez in May 1958 after a spirited buildup in which the brothers – billed from Savannah, Ga. at a time of civil unrest – toppled several Hispanic wrestlers at spot shows in New York. “After about two weeks of that, we were having riots just going to the ring,” Hamilton recalled in The Pro Wrestling Hall of Fame: The Tag Teams.

As The Assassins, Hamilton was destined for greatness, inducted into the Pro Wrestling Hall of Fame in the Tag Team Category in 2013. 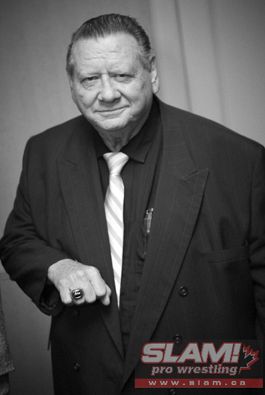 Jody Hamilton shows off his Pro Wrestling Hall of Fame ring in May 2013. Photo by Andrea Kellaway, www.andreakellaway.com

Jody Hamilton had never set eyes on Tom Renesto before they joined forces for a tag match in Atlanta in December 1961, even though Renesto had sometimes partnered with Hamilton’s older brother, Larry, in the Carolinas just a few years before. But as one-half of a new team called The Assassins, Hamilton, just 23, quickly sensed that he and the well-traveled son of a Los Angeles deputy sheriff were on the brink of something special.

For more than a dozen years, The Assassins was as complete a team as has stepped foot into the ring. The duo could work any style in any territory, tend to promotional work without a managerial mouthpiece, and do it all under masks that prevented them from employing facial expressions that are so important in wrestling.

“They were probably the best I’ve seen,” said longtime Los Angeles publicist Jeff Walton, who also worked as a manager in Tennessee under Renesto’s watch. “Both of them personally liked each other – it was not a tag set up by a promoter and a matchmaker. They were smart businessmen. Both of them were schooled very well as wrestlers. They worked so well together; their timing was impeccable. They could work with any team, the Mexican style, they could work with the Japanese wrestlers.”

After hooking up in Atlanta, The Assassins led a dual life for a while, wrestling as Bolo and the Great Bolo for Crockett, and under the rubric that world make them famous in Georgia and Florida. “The Bolo name was already established up there from Tom’s work and they wanted to capitalize on that. That was fine with us as long as they paid us,” Hamilton laughed. “It went away after a while and we were just The Assassins.” 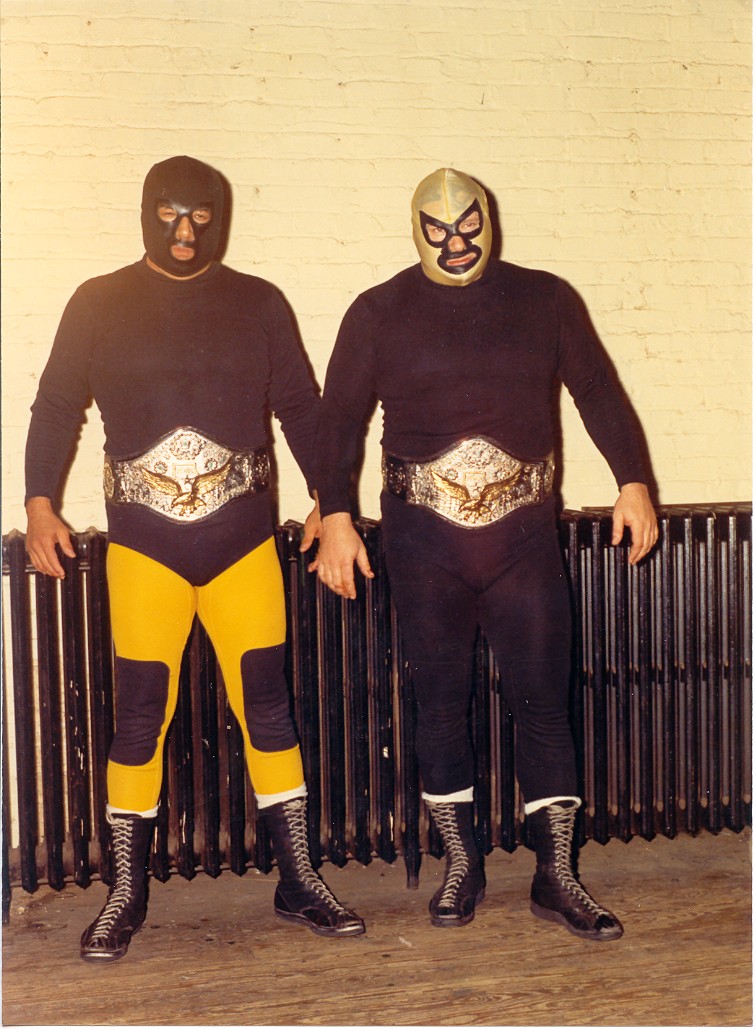 The Assassins held more titles more than a dozen times in places as diverse as Georgia, California, Australia, the Far East, Japan, and Vancouver, B.C. Wherever they went, Hamilton felt the famous black and gold masks helped to add a mysterious touch to the team, and hide his own youthfulness. “I was kind of a little babyfaced-looking guy. I didn’t having trouble getting heat but I had trouble getting the kind of heat that I could get with the mask on,” Hamilton said. The hoods forced the teams to use body gestures instead of facial expressions, but also provided a convenient hiding place for foreign objects and well-placed headbutts.

At the same time, The Assassins promoted their matches in a manner added to their mystique and left fans scratching their heads about their identities. “One of the keys to them that fascinated me was that here were two guys who talked like college professors and wore masks,” wrestler-announcer-trainer Les Thatcher said. “They didn’t scream, they didn’t holler, they didn’t threaten; they talked like well-educated human beings and at the time, heels just didn’t do that. They were very sound both as mat wrestlers and all out heels.” 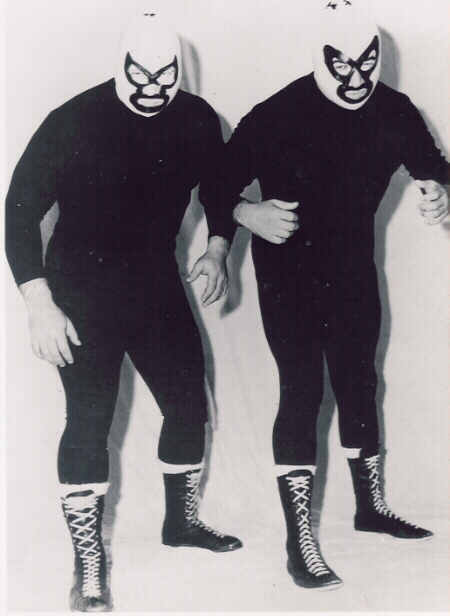 Characteristic of The Assassins’ ability to sense an opening for a classic series of matches was a long-standing brouhaha with the beefy Kentuckians team of Tiny Smith and Luke Brown. “Before we got them in Florida, the Kentuckians were in the Carolinas and they had them in the Carolinas trying to do arm drags and takedowns and stuff like that, and they weren’t taking advantage of their size and their gimmick,” Hamilton said. By helping Smith and Brown work their natural style, The Assassins drew packed houses from the Carolinas to Florida. “I loved working with them. They were fantastic,” added Dick Steinborn, who frequently met up with Renesto and Hamilton in singles and tags. “Tom was loose as a goose and Jody was right behind him.” Their longest run was in Georgia, where they worked almost nonstop from 1968 to 1972 against the Torres Brothers, Ray Gunkel and Buddy Fuller, and Terry and Dory Funk Sr.

The team fell prey to the political workings that split Atlanta into two competing factions following the 1972 death of Gunkel, co-owner of the territory. While most wrestlers followed Ray’s widow Ann to All-South Wrestling, the National Wrestling Alliance continuously tried to squeeze its rival out of business. In October 1972, Renesto, who was handling Mrs. Gunkel’s booking, got wind that NWA officials planned to circulate pictures of the unmasked Assassins as a way of exposing them. Renesto beat them to the punch by unmasking on TV while Hamilton was in Japan. “Boy, it was a shock to me,” said Renesto’s son, Tom Jr., who followed in his dad’s footsteps as a wrestler. “I had no prior knowledge and neither did anyone in our family. Protection of the family had a lot to do with it because there was a lot of funny stuff going on with the two promotions at the time.”

The Assassins still paired up a few times in the ensuing years, and Hamilton had other partners under a mask, notably the late Randy Colley.

Hamilton continued to wrestle until 1988 when a back injury ended his career. But even before he’d stopped active wrestling, he had started training others in 1985. His facility morphed into what would become the WCW Power Plant in Atlanta.

“I had my own independent gym and the Power Plant evolved out of my independent gym when WCW wanted, my begging and pleading and crying and whining and moaning and groaning and trying to finally convince the powers that be that they needed a training center to develop young prospective talent,” Hamilton recalled. In 1991, WCW fully turned its training over to him.

In 1999, Hamilton noted how lucky he was. “I love what I do. Very seldom does a person ever get the opportunity to have two careers within the same profession in one lifetime.”

Asked to compare then and now, he had a ready answer. “The wrestlers of the past were probably better mat technicians, but I think the wrestlers of today are bigger, stronger, faster, smarter.” He didn’t suffer fools. “If they don’t have a good attitude, I run their ass out of here.”

So many names came through his schools and his Deep South promotion that it is staggering. Some he trained from scratch, some Hamilton polished; what he didn’t do was work with gimmicks — that was for elsewhere. You can’t argue with the success of some of them: Goldberg, Kevin Nash, Diamond Dallas Page. Hamilton’s son was also well-known WCW and WWE referee Nick Patrick. 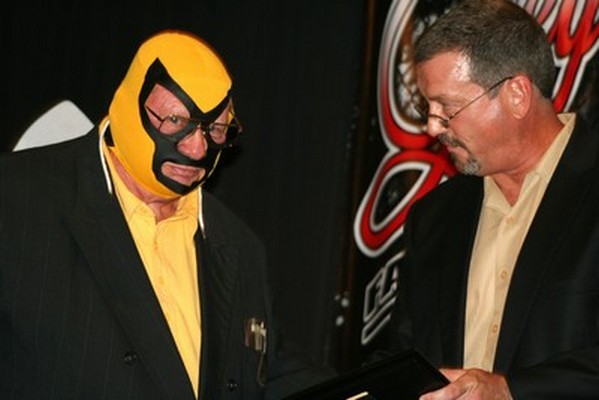 The Assassin Jody Hamilton and his son, Nick Patrick, at a fan fest in 2011. Photo by Mike Andrews

For Hamilton, DDP always had a special spot. “He was not supposed to really happen and the only reason he did happen is his work ethic. He was hard-nosed, dyed-in-the-wool, first in at the gym in the morning, all day long he was there, and I had to kick his ass out the door at night so I could go home,” said Hamilton. “He had that confidence in himself, and the more I watched him, and how hard he worked and everything, then I had the same level of confidence in him. I think that at that point, he and I were the only living human beings on the face of the Earth that thought that he could end up doing it. And he did. He didn’t have near as much natural ability as some of the guys that I’ve trained, like Kevin Nash or Goldberg, and a few other people. But by the same token, what he didn’t have naturally, he made up for with hard work and dedication.”

Of course, work and dedication could describe Hamilton too. 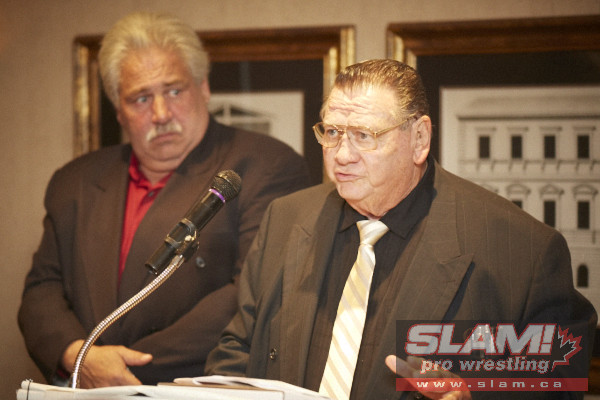 Tom Renesto Jr. looks on as Jody Hamilton speaks at the Pro Wrestling Hall of Fame ring in May 2013. Photo by Andrea Kellaway, www.andreakellaway.com

He wrote his life story, Assassin: The Man Behind the Mask, with Scott Teal of Crowbar Press, which detailed a life in wrestling; it came out in 2006. That included his days training and promoting post-WCW, as WWE did not keep the facility after it bought WCW in 2001.

Deep South Wrestling was the promotion Hamilton ran in Georgia, and in 2005, he partnered with WWE, where its wrestlers could be assigned to DSW to continue to learn, a precursor to its eventual NXT set up. The partnership ran for two years. Hamilton was also involved with the Rampage Pro Wrestling promotion based in Georgia.

It is with heavy heart that I make this post. At 2:16 today my father took his last breath on this earth. He passed comfortably, surrounded by the people that love him. Now our attention has to shift over to taking care of my mom. I want to thank everyone that sent out prayers and support for my family. I will put more information about pop out, but right now I’m kinda numb.

Further details on his cause of death and funeral arrangements are not known at this time.