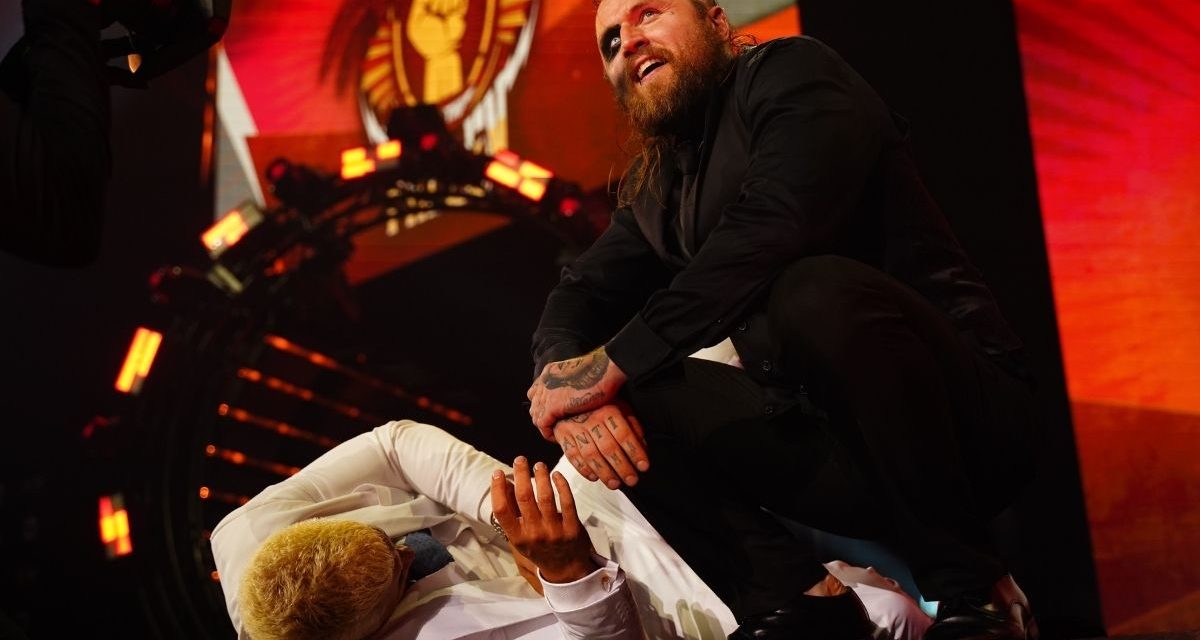 For a media conference that promoted Cody Rhodes’ take on Malakai Black before their match on Wednesday night’s AEW Homecoming, there wasn’t a lot of talk about Malakai Black. But Rhodes sure had lots of other things to talk about.

Rhodes, one of the Executive Vice-Presidents of AEW, noted at the outset that “being on the road for shows for the last month has really been wonderful.”

He also warned that he wasn’t going to talk about any rumors and speculations — “I won’t be comment on any of that.”

However, when asked about the just-released WWE star Bray Wyatt, he had to weigh in . “Bray Wyatt, before he was Bray Wyatt, he was my rookie in that second season of NXT,” noted Rhodes, calling Windham Rotunda — Wyatt’s real name — “an incredibly creative individual.”

“I can’t comment if I can see a spot for him,” he said, but “that guy can fit in anywhere.”

In a general sense, Rhodes acknowledged that there was lots to choose from out there. “You can’t wish away good talent,” he said. “If there’s a free agent that’s out there that can move the needle … I think you have to go after them.”

The shows on the road again were a oft-raised subject. Domestically “we have a good idea where we want to go,” he said, adding that for the rest of the year, “it’s fairly well mapped out … there’s a full touring scheduling from the east coast to the west coast.” The question was asked by a United Kingdom-based reporter, and Rhodes said that any company that wasn’t running a hot market like the UK was foolish, and that AEW would be there … eventually … pandemic permitting.

AEW is headed to the United Center in Chicago for the debut of Rampage, on Friday, August 13th. “I think we can call it an instant sellout,” Rhodes said of ticket sales at the large venue, where the Bulls and Blackhawks play. He wracked his brain trying to think if he’d ever wrestled at that venue, but didn’t think he had — WWE had always run at the Allstate Center. “You can’t go wrong wrestling in Chicago.”

Could there be stadium shows too? Rhodes noted that Arthur Ashe Stadium in Queens, NY, is a stadium, just not a massive one, like Miller Park in Milwaukee, which he mulled about running. “I think that would be a very big goal for me,” he stated. “We’re at the point now, ‘Could we?'” Rhodes said that it had not been formally talked about, but he thinks that everyone has thought about it.

Rhodes teased a little more about the one-hour show, Rampage, on Friday nights, and noted more info would come later this week. Mark Henry will be on commentary, for one thing. “It’s more centered around the fight itself, the match itself,” Rhodes said, stressing the shorter show. “You’ll see a little more fight-forward focus.” He also believes that there will be a logo in the center of the ring again (“one of my favorite things ever”).

While logos might be a favorite, Rhodes positively gushed — taking time to compose himself — talking about his daughter, Liberty Iris Runnels, born on Friday, June 18.

“It’s like all the things people tell you but you don’t believe,” he said about parenthood. Pro wrestling is “self-serving” and when she was born, “it became about what I can do for her.”

Rhodes called Liberty “the most beautiful thing on Earth” and when asked about a new “To Do List” as he famously posted after his WWE departure, Rhodes offered “maybe a sappy answer,” that “I’d like my daughter to know that I never gave up.”

He referenced “The American Dream” Dusty Rhodes. “I had the best dad in the world and I just want to be that for her.”

Other topics included the Death Match between Chris Jericho and Nick Gage. “I think the match was as advertised,” he said, noting that AEW was the top show on cable. He thinks that violent matches have a place, but “it’s important that you balance your show out” and offer a “wonderful buffet of wrestling.”

AEW’s recently-launched community outreach program was discussed, as were promos and coaching, and following state guidelines for masks at shows.

But back to Black, who Rhodes will face at Homecoming, back at Daily’s Place in Jacksonville, Florida.

Malakai Black — who was Aleister Black in WWE and also goes by his real name Tommy End — got out of his WWE contract sooner than expected, 30 days instead of the usual 90; AEW jumped at signing him. “No plans were changed. If anything, we were presented with something incredibly special,” said Rhodes, noting that whenever there’s a free agent of that caliber, male or female, you have to jump on it.

He has no problem with the storyline and tomorrow’s match being on cable and not pay-per-view. “TV is where our bread is buttered,” he said, and then later talked some more about being on TNT. “This thing is just so up in the air, for what it can be. It’s a massive match for Dynamite, and just a massive match for the company.”

Rhodes said that Black has a lot of passion, and the influence of the mysterious figures of the past, like Jake “The Snake” Roberts is evident. He said Black was “a mustang without a saddle.”

You won’t see a heel turn by Rhodes, aligning himself with Black, though.