NXT: Love Her or Lose Her 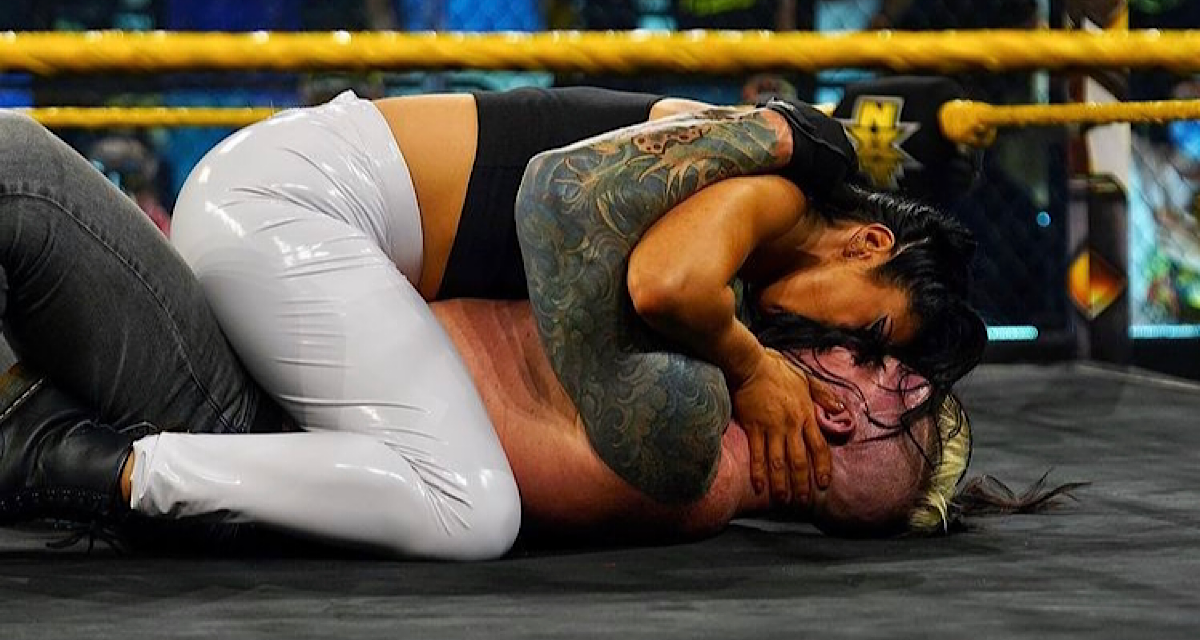 Ashonte “Thee” Adonis and Top Dolla of Hit Row versus Joaquin Wilde and Raul Mendoza of LDF is tonight’s opening matchup. Hit Row takes opening control until Santos Escobar makes a ringside distraction before commercial, and Wilde retains the momentum afterwards. LDF is very overlooked, but for now, they’re fitting ragdolls for the massive Top Dolla. He initiates the comeback before Escobar blatantly attacks with a steel chair, which results in a disqualification finish. Escobar and LDF continue the attack on Isaiah “Swerve” Scott until B-Fab, Adonis, and Top Dolla make the save. The preceding bout was decent, but the aftermath was much more exciting.

Brickhouse Holland makes his in-ring return tonight against Jiro, coming back from a gruesome leg injury. Holland has clearly recovered, looking mighty swole, while pouncing the opposition around the ring. He somehow gets an abnormally loud heel reaction by stripping Jiro from his blazer and quickly slams him for three. Afterwards, Holland’s cornermen Oney Lorcan and Pete Dunne enter the ring; Dunne sends a message to Tommaso Ciampa and Timothy Thatcher as the brickhouse stands tall.

Former Undisputed ERA brethren squaring off should be more important. Fish and Strong, under their signature armbands, ran the brand. Tonight though, they’re simply on third. Nevertheless, main event or midcard, they’re top-tier grapplers and prove it before picture-in-picture hits. The bout is mainly characterized by Fish’s striking game, which earns him majority control, but Strong counters with his all-rounder style. Strong capitalizes on a momentary hesitation with his finishing End of Heartache for three.

LA Knight and his butler Cameron Grimes prepare backstage, and the teammates have a conversation about having each other’s backs. That is, before Grimes is forced to shine Knight’s boots.

If Ikemen Jiro wrestling in a blazer was something, Grimes tonight is wrestling in a full tuxedo. Before the match, GYV talks some smack, and it’s like listening to nails on a chalkboard. The experienced duo takes advantage of Grimes, but the fan favorite makes the desperation crawl; however, Knight refuses the tag. Grimes makes a triumphant two-on-one comeback, but Ticket to Mayhem from GYV earns James Drake and Zack Gibson the victory. The winners’ over-the-top victory screech might’ve made this bout worth it.

“The Million Dollar Man” Ted DiBiase makes his way ringside, giving Grimes some words of encouragement. DiBiase’s involvement with young Grimes has been an interesting ride.

Another package plays, this time covering Raquel Gonzalez and Dakota Kai’s relationship. They’ll compete for the NXT Women’s Championship at NXT TakeOver: 36, and Kai pulls a Dolph Ziggler saying, “It should’ve been me!” Although she was, Kai is “nobody’s sidekick”.

Backstage, Johnny Gargano and Candice LeRae react to the Love Her or Lose Her match. Tonight, Gargano will “end InDex”.

The competitors carry opposite styles, but both Baxter and Gacy are incredibly crisp from the get-go. The brawler Gacy throws stiff blows, but Baxter recuperates with three consecutive dives. Gacy comes back with a cannonball and positions Baxter up top. However, the latter reverses and delivers a crazy 450 stomp to win. Although only Baxter advances forward, both wrestlers had very impressive showings.

The NXT Women’s Tag Team Champions are eating out at a Japanese restaurant. Io Shirai orders the meal, but Zoey Stark doesn’t appreciate the wasabi — although she takes the bill. And for some extra comedy, the waitress explains that she isn’t from Japan, but instead from Kansas. What in the Monday Night Raw?..

Indi Hartwell is torn between family and “true love”. Johnny Gargano battles Dexter Lumis in a Love Her or Lose Her match next.

The NXT Champion Karrion Kross storms the announce desk and provokes Samoa Joe to appear. Samoa Joe fights through all five aforementioned security guards as the Capitol Wrestling Center erupts. Kross, however, runs back to Mondays.

A special Prime Target recaps WALTER versus Ilja Dragunov. It was arguably 2020’s match of the year, and at NXT TakeOver: 36, the rematch goes down. Regarding the video package itself — what a beautiful piece of work!

The NXT Cruiserweight Champion Kushida says “you got it” in response to Roderick Strong’s title hunt. It’ll be good!

That’s right, it’s a Love Her or Lose Her match between Gargano and Lumis with Indi Hartwell’s free will in contention. Strict daddy Gargano suplexes Lumis before Hartwell appears ringside, and a side conversation allows a momentum change. Lumis slithers under this ring and Hartwell follows, but Gargano and Candice LeRae pull them out preceding picture-in-picture. The intensity picks up with Lumis’ leg drop and Gargano’s outside dive before punches are exchanged. Gargano avoids a springboard elbow and cinches the Gargano Escape, but Lumis inadvertently knocks down Hartwell. This allows Gargano to capitalize with an outside DDT and One Final Beat for three. InDex is over! Well, actually, Hartwell runs towards Lumis, and InDex makes out before show’s end.

Quite honestly, the Prime Target video package of WALTER and Ilja Dragunov stole the show. It was grand, moving, and incredibly well done. Credit where credit is due though, Gargano and Lumis exceeded expectations. But between InDex, Japanese dinners, Robert Stone, and butler shenanigans, the episode was overrun with “graphic stupidity”, making NXT tonight’s biggest Lose Her.