ATLANTA – At the 2011 Mid-Atlantic Gateway Hall of Heroes award banquet, a much-anticipated event that concluded the second day of the

last Friday, attending fans got to share tables with their wrestling heroes as seven truly legendary personalities were welcomed into the event’s hall of fame. Seated around the Marriott ballroom was a dean’s list of wrestling pioneers and former champions as such legends as Nick Bockwinkel, Ivan Koloff, Tony Atlas and Terry Funk dined, laughed and reminisced while the memorable evening unfolded.

The reunited tag team of Lars and Ole Anderson shared a table up front with their family members. Unfortunately for Ole, the seating arrangement made it easy for Hall of Heroes inductee Ron Garvin to see his old buddy/rival sitting nearby. During his acceptance speech, Garvin, who was inducted by long-time NWA referee Mac McMurray, told a story about the time he jokingly convinced his frequent traveling partner Anderson that there was a secretly “gay” wrestler in the territory. This was a discovery the two — particularly Anderson — discussed at length for the next few months with Ole never able to correctly guess, as Garvin told, who it was. That is, until the night that Garvin hid inside Anderson’s car to deliver a long-concealed punch line. As he remembered with a chuckle, the prankish, none-too-feminine Garvin intentionally outed himself as he hollered this startling wake-up call to Anderson — “I love you, Oleeee!!!” 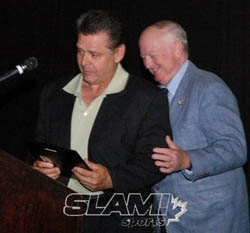 Ron Garvin and Mac McMurray. All photos by Michael Andrews

That kind of story was commonplace at the Hall of Heroes event. An inductee or inductor shared the good, the bad, the ribs and the wreckage of life on the road with his fellow traveler(s). Some inductees were there to tell and laugh about it, while others were inducted posthumously.

Such a pair of tight-knit traveling partners was Nick Bockwinkel and the late Ray “The Crippler” Stevens. Bockwinkel was on hand to induct his most frequent and befriended tag team partner, Stevens, into the hall. “The good Lord made it clear I was going to enjoy the wrestling business. Thank you dear Lord for giving me those guys,” said Bockwinkel about Stevens and their quick-witted manager Bobby “The Brain” Heenan.

Bockwinkel promised to keep his speech short and sweet, which he did. But, before he could step down from the podium, a red-curled woman who turned out to be Stevens’ daughter, Laura, approached the stage. She surprised and delighted both Bockwinkel and the evening’s host, J.J. Dillon, before saying a few words on behalf of her dad. She then hugged Dillon and Bockwinkel as the three engaged in a brief, unplanned reunion. “I really didn’t know you were here!” the still-surprised former AWA champ swore to his buddy’s daughter as the two exited smiling.

That kind of surprising moment was seen many times at both the Hall of Heroes function and at the whole NWA Legends Fanfest. “Where else can you see Terry and Dory Funk (Jr.) together in the same room?” Dillon asked the banquet crowd before mentioning his amazement at seeing retired wrestling legend and pioneering heel Pampero Firpo earlier at the day’s autograph sessions. Dillon said it had been a very long time since he and Firpo had interacted, at least since both of them actively wrestled in Texas some 30-plus years ago. 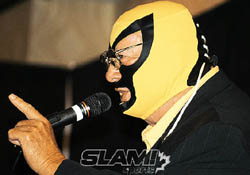 Joe Hamilton, in his Assassins mask and glasses, addresses the audience.

One of the evening’s most heartfelt speeches came from a man who always knew how to make the most of his words when it came time to prove a point or get an angle over — the longest-running member of the masked Assassins, Joe Hamilton. Though Hamilton was recognized as Assassin #2 for part of his career before Renesto retired the mask and black tights, during his acceptance speech Hamilton said the two men did so well together because they learned how to effectively work “as one” in and out of the ring.

“There was no Assassin 1. There was no Assassin 2. For a team effort, there is no room for individualism. We spent a hell of a lot of time together. (I probably spent more time with) Tom Renesto than with my own family. In 15 years, there was not a cross word between us,” said Hamilton of his respected partner and tutor. Hamilton added that Atlanta was where he and Renesto first formed the Assassins team and that the Hall of Heroes induction was just as much Renesto’s as his. Fittingly, Hamilton, who was inducted by his son former WWE and WCW referee Nick Patrick, accepted the honor wearing his yellow and black Assassin hood.

Another emotional moment came when Diamond Dallas Page stepped up to induct the late Sir Oliver Humperdink. Humperdink, the man who helped Page and numerous others find their way in the wrestling biz, passed earlier this year after a lengthy bout with cancer. Page remembered “The Humpster” being “someone who did whatever it took to break into the wrestling business.” He told the crowd about how Humperdink worked as an usher at a Minnesota movie theater before getting his big chance in wrestling courtesy of “Butcher” Paul Vachon. 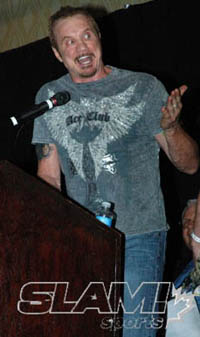 “As J.J. said, nobody ever said anything bad about the Hump,” said Page. Upon closing his address, DDP painted a vivid portrait of the feisty, bug-eyed Humperdink (and the real-life John “Red” Sutton) as a giving soul who, despite portraying a villainous wrestling manager on TV, also played “Santa for the kids.”

During his induction of Bill Eadie, the man behind the Masked Superstar, a reflective Stan Hansen remembered traveling the Georgia Championship circuit many a time — from Atlanta to Columbus to Augusta — as a passenger in Eadie’s van along with Angelo “King Kong” Mosca. “The Falcon’s Rest … remember that place?” asked Hansen about the nearby Hapeville apartment complex that housed many of the territory’s wrestlers and saw even more wild, crazy scenes during the heyday of GCW. Eadie, looking dapper and delighted with his thick hair slicked back not unlike Demolition Ax, blushed and grinned widely while accepting his plaque. “I went over to pick up a napkin and Wrestling 2 stared to give me a knee!” said Eadie as he kidded with his fellow masked man and former Georgia rival, also in attendance at the banquet. 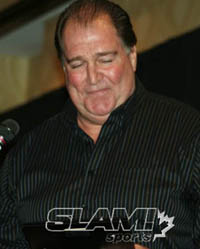 Bill Eadie checks out his plaque.

The induction of TBS mogul and former WCW owner Ted Turner turned emotional, as well, but in a different way. That was because of who accepted Turner’s plaque — former Georgia star and master of the microphone Claude “Thunderbolt” Patterson. Dressed in a western-themed suit and cowboy hat, Patterson turned the convention podium into more of a pulpit as he expounded on the man who brought TV “rassling” to the living rooms of Georgians during the ’70s and ’80s and, as the ’90s unfolded, went head to head with Vince McMahon during the infamous Monday Night Wars. 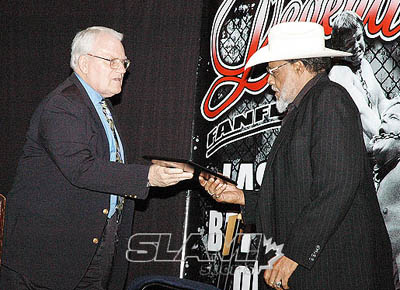 “People arranged their schedules to be at home in front of the TV at 6:05,” said Dillon in reference to the belated start time of World Championship Wrestling on the Superstation. “I’m talking about the man who made wrestling! Ted Turner did it for all of us,” exclaimed Patterson.

A man who did as much as Turner to make that 6:05 time slot the place to be for Georgia wrestling fans did so in front of the camera and behind the mic. The posthumous induction of “Dean of Wrestling Announcers” Gordon Solie was, arguably, the Hall of Heroes’ main event. Few were better suited to induct the consummate wrestling commentator into the hall than Solie’s one-time Georgia Championship Wrestling co-host “Rowdy” Roddy Piper.

“If Mean Gene … or any of those other great announcers were here, they’d say Gordon was at the head of the pack,” said Piper, whose speech zigzagged between memories of working alongside Solie during the early ’80s and reflections on several of the men who Solie helped to get over with his ever-serious broadcasting style. “He was kind of like the Walter Cronkite of wrestling. He made you the star,” said Piper of Solie, adding that one of Solie’s greatest attributes was that he always knew when to speak and “when to shut up.” 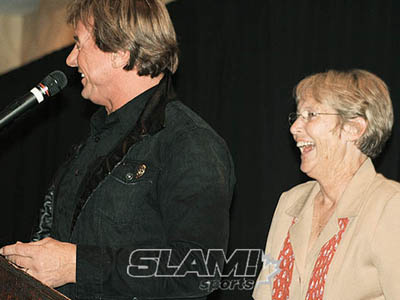 “I miss him, I miss all you guys,” said an almost tearful Piper before unwittingly participating in one of the evening’s funniest unplanned moments.

Upon introducing Solie’s daughter to accept the plaque, Piper called upon “Lea Medford” who, turned out, was not in the building and, furthermore, may not even exist. Instead, Solie’s real daughter, Pam Allyn, and her husband, Bob, jovially corrected Piper on his mistake as the Rowdy One became the Red-Faced One for a couple of minutes. “If (Gordon) was here, he would have cut me off already,” Piper joked at one point.

“He was a man of many words. He passed it on to me and I passed it on to my kids,” said Allyn, who added that she has worked as a teacher for several years thanks to the tutelage and consummate grasp of the English language passed down from her dad. Solie worked behind the scenes in Florida stock car racing before signing on as a wrestling announcer who would become the trusted voice of several major NWA Southern territories and, as Allyn confirmed, her father loved his job. “The day he couldn’t go to work, he was miserable,” she said. 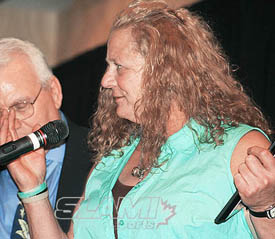 As numerous wrestlers who once shared the desk and stage with Solie stood to applaud the man along with the rest of the room, one could only imagine what a speech would have been heard if the Dean, himself, had been there to accept the honor.