ATLANTA – As the third day of the first NWA Legends Fanfest to be held in Atlanta, unfolded, wrestling fans who attended found themselves in the midst of at least two former NWA World Heavyweight Champions, one of the most popular Southern tag teams to ever achieve worldwide fame, a pioneering lady wrestler and Memphis/WWE’s sharp-witted King. Brothers Terry and Dory Funk Jr., the Rock n Roll Express, Cora Combs and Jerry “The King “Lawler were just a few of the veteran grapplers who signed autographs, posed for photos and mingled with fans at the event’s busiest day so far. 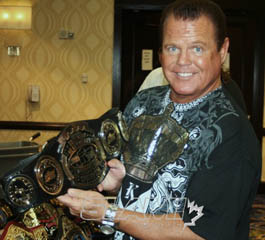 Jerry Lawler poses with a replica of the Southern Heavyweight title. Photos by Michael Andrews.

When coming face to face with some of the legends on hand, it wasn’t hard to notice the toll that years spent taking backdrops, body slams and piledrivers had taken on their bodies. Rowdy NWA bruisers Dick Slater and Ole Anderson navigated the Atlanta Marriott ballroom in wheelchairs, but appeared to be in good spirits, nonetheless, as they shared stories about memorable angles with fans and caught up with onetime nemeses, allies and tag team partners.

The signatures of the Minnesota Wrecking Crew version II — Ole and Lars Anderson — were must-haves for older fans who remembered the rough-hewn Andersons, along with the late Gene Anderson, before “Enforcer” Arn entered the picture. Appearing at his first-ever wrestling convention, Lars Anderson (Larry Heinemi) looked happy to be there and, with the exception of his brown locks having turned white and the absence of his handlebar mustache, looked very much the same as when he and Ole wreaked havoc in the Southeastern leg of the U.S. during the ’70s and early ’80s.

The same was true about appearance for former NWA world champion Dory Funk Jr. and former AWA champ Stan Hansen, who debuted and signed his new biography, The Last Outlaw, at Scott Teal’s Crowbar Press booth. Except for the fact that the sight-challenged Hansen wore a pair of eyeglasses and was not chewing any tobacco that could be noticed, the master of the Lariat had not changed much in looks since his retirement from the ring almost 11 years ago.

On the other side of the room, fans of classic Memphis wrestling who happened to be in line at around 3 p.m. got a dream-come-true photo opportunity as “Mouth of the South” Jimmy Hart joined Lawler and his greatest foe (and, as some would argue, greatest-ever tag team partner) “Superstar” Bill Dundee for a little catching up.

“I’m really enjoying this weekend in Atlanta. I used to live here when I worked for Turner Broadcasting,” said Dundee, draped in a black velvet print shirt that matched his trademark coal-black coif. “This is the first time I’ve been to the Fanfest and I’ve been able to see and talk to a lot of guys I haven’t seen in around 20 years. There’s Terry and Dory Funk. I’ve seen Terry around a little bit, but Dory I hadn’t seen in a real long time. Dallas Page I hadn’t seen since we both worked for Turner. Over there’s (Dick) Slater and Wrestling II — I hadn’t seen him since I worked for Bill Watts (during the ’80s). I hadn’t seen Raven in 10 to 15 years, either.”

Later, Lawler reunited with another of his greatest allies. While browsing the replica title belts on display at the vendor booth of master beltmaker Dave Millican, Lawler proudly admired an exact scale replica of the AWA Southern title which, despite years of stiff competition, was held the most times in the long and bloody history of Memphis wrestling by none other The King himself.

Raven (Scott Levy), one of Saturday’s funniest and most approachable superstars, expressed similar sentiments about the event. “I’ve had a lot of fun here and met a lot of people I hadn’t ever met before,” said Levy. “I hadn’t seen Stan Hansen in about 20 years. I was only on one world tour with him in Japan and I got to talk to him for about 45 minutes today. He actually remembered me from that Japan tour which there’s no way I thought he would since it was 20 years ago. It’s been cool, a good time. I actually live in Georgia, now, and have for about 12 years.”

Some at the Fanfest whispered to one another about how sad it was to see consummate manager and commentator Bobby “The Brain” Heenan looking much smaller and almost unable to speak intelligibly after undergoing recent jaw reconstruction surgery that followed a persistent battle with throat cancer. But for Heenan, who made a stellar living with his cunningly conveyed grasp of the English tongue, any amount of pity or melancholy that filtered through the room seemed to be lost on the man that, through at least three decades, fans loved to call Weasel.

Many of those who grew up watching WWF or Georgia Championship programming during its height of popularity in the ’80s couldn’t help but get a little misty-eyed when watching an upbeat Heenan, accompanied by his caring wife, Cindy, shoot bull and trade hugs with his onetime charges Haku and “Outlaw” Ron Bass, as well as his fellow WWF mega-heel “Million Dollar Man” Ted DiBiase. 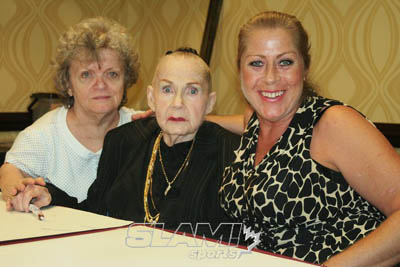 A table occupied by two top lady grapplers of different generations featured mother and daughter Cora and Debbie Combs. Combs, age 88, is believed to have been the oldest featured wrestler at the convention. Though not there as a featured guest, the two Combs received a surprise visit from old pal and a pioneer of ladies wrestling in her own right — female midget competitor Darlin’ Dagmar, who was there to enjoy some fellowship amongst friends.

Though the modern-day NWA is not the nationwide assemblage of promotional power it once was, old-school fans still remember what made Georgia and the 20-odd other NWA territories so special — the kooky and the crazy, the tough and the intimidating, the gallant and the sympathetic men and women the alliance employed. It was these distinct, varied personalities who made yesterday’s wrestling world a weekly escape from the mundane and also made this year’s Fanfest a special place to be for those who still remember.