ATLANTA – In reality, fans walking into the second day of the 2011 NWA Legends Fanfest were simply entering the grand ballroom of the Atlanta Marriott Hotel. But somehow, during that walk, those same fans were transported back to their childhoods and, for others, their 20s, 30s or 40s. Back then, the secrecy of kayfabe ruled professional wrestling and personalities like Stan Hansen, Tommy Wildfire Rich, Harley Race, Dory Funk Jr. and Mr. Wrestling II ruled its rings.

Those and many more legends who made names for themselves in Georgia’s various Atlanta promotions greeted fans and told stories with one another Friday, August 4, while also shaking hands with young, pint-size admirers who must have learned of what wrestling was like before WWE from their parents’ DVD collections. After all, many of the men there to participate in the interactive fan event — JJ Dillon, Rowdy Roddy Piper and Steve “O” Olsonoski among them — are now more likely to be seen around a family dinner table than in a wrestling ring. But that doesn’t mean they’ve gotten the business out of their systems quite yet. 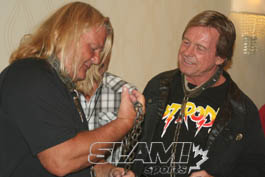 As fans chatted about memorable angles while lining up to get autographs and photos taken with the likes of Lars and Ole Anderson, Wrestling II, Tony Atlas and Nick Bockwinkel just to name a few, many of the boys also did a little catching up with old friends.

Jim “The Anvil” Neidhart and “Dr. D.” David Shults shared a few laughs in the hotel hallway like if they hadn’t seen one another in years, which they probably had not. Memphis legends Austin Idol and Bill “Superstar” Dundee kidded each other on the way to dinner, while Starrcade ’83 rivals Rowdy Roddy Piper and Greg “The Hammer” Valentine told each other quick jokes as they participated in a photo op that gave fans the chance to pose with a legendary trio — the two tough-as-leather ring veterans paired with the actual leather dog collar that bound them together for their blood-soaked match at the groundbreaking 1983 NWA supercard.

One seldom-seen legend there to shake hands and sign autographs was Pampero Firpo (or Juan Kachmanian), the Wild Bull of the Pampas. Now minus all the wooly facial hair and tangled locks that once helped define his character, Firpo was nonetheless able to snap into instant heel mode when brandishing the feared claw hold that that, for many years, was his preferred and dreaded mat finish. Later, at the evening’s Hall of Heroes award banquet, program host Dillon said that he hadn’t seen Firpo anywhere in years, at least since Dillon, himself, wrestled in one of the NWA’s Texas territories.

Col. Buckley Christopher Robley III mugged, or rather grimaced, for the SLAM! Wrestling cameras while conversing about his creativity as a booker. When asked what he would do to the nearby Mr. Wrestling II if wheeled into the ballroom in a mysterious wooden box as Col. Buck was during a 1988 Southern Championship Wrestling angle that also involved 2011 Fanfest co-host Joe Pedicino, Robley growled, “I’d do the same thing I did to him then — beat the hell out of him!” One can only assume the still cagey Robley was just kidding.

In fact, many Fanfest attendees, particularly native Georgians, remembered event hosts Pedicino and Boni Blackstone just as well as a legendary “Georgia guy” like Mr. Wrestling II. During an interview segment with Superstars of Wrestling couple Pedicino and Blackstone, Johnny Walker in his famous black and white Wrestling II mask, recreated his much-remembered heel turn with help from ’80s wrestling magazine czar Bill Apter as both of them poured a cup of confetti, instead of water, over Pedicino’s head.

Apter, still admired by old school wrestling fans thanks to his plentiful magazine work, as well as his consistent ringside presence in seemingly all of the NWA’s territories, said that Georgia wrestling still holds a special place in the hearts of fans around the nation. “I just got here three hours ago and (this Fanfest) has been an amazing experience so far,” Apter said. “I put to the side of my mind all the memories on TV that happened here (Atlanta) during the ’70s and ’80s. People still talk to me about that a lot. I’m just thrilled to get to see all these guys, like (Mr. Wrestling) II , again, as well as so many of these guys that I haven’t seen in such a long time.”

After speaking to SLAM! Wrestling, Apter — the genial, former chief editor of Pro Wrestling Illustrated, and current writer for a couple of overseas magazines and the 1wrestling.com website — went back to carrying on a seemingly normal conversation with current PWI contributor Brady Hicks who arrived dressed in a dapper suit and tie topped off with a striking red and yellow wrestling mask. Only in the weird, wonderful world of wrestling; only at an event like the NWA Legends Fanfest.