By DONN WINGATE – For SLAM! Wrestling

With the publication of Mick Foley’s Have a Nice Day in 2000, the publishing world finally realized that not only do wrestling fans read but there is in fact a fertile market for wrestling books. And wrestling fans have been the beneficiaries ever since as the floodgates have opened to the point where we can now look at each new release with a discerning eye. 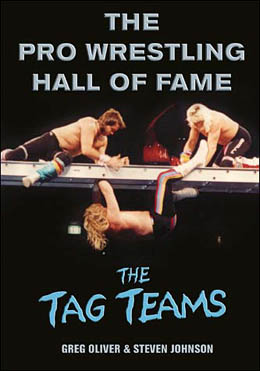 Chapter organization is a vital yet often overlooked part of any book. The chapters in The Pro Wrestling Hall of Fame: The Tag Teams are organized so that everything is easy to find and maneuver around within. A brief look at the origins of tag team wrestling leads into a numerical ranking of the top 20 tag teams of all time. And just as you are wondering how Nick Bockwinkel and Ray Stevens were unable to crack the that list, they appear in the next chapter entitled “The Next Five.”

From there the chapters are broken down into helpful headings such as The Golden Era (’50s-mid ’60s), Brothers, Territorial Era, Evil Foreigners, and The National Era (mid-’80s-present). If there is a tag team worthy of mentioning, they will be in this book and you will be able to find them with relative ease.

This book has something for wrestling fans of every era. But the real meat and potatoes lies with the old school wrestlers who give their opinions on their own tag teams, other tag teams, not to mention anecdotes and stories that will have you glued to every page.

This is thanks to the impeccable and tireless research Johnson and Oliver have put into this book. The passion for their subject matter shines through on every page. They’ve also enlisted the additional help of a veritable who’s who of modern wrestling historians and also make great use of additional books, newsletters, and magazine resources. What puts the book over the top are the words of the wrestlers themselves. It’s a riveting oral history lesson on professional wrestling.

Wrestlers writing their own autobiographies usually have some great anecdotes and stories, but they also have an agenda or an axe to grind that you need to sift through to get to the good stuff. If you like to listen to wrestlers, especially the old-timers, tell stories and talk about the business all night long, that’s the feel of this book.

When it comes to tag teams I’m always curious about what makes the good ones click. How did they get along in and out of the ring while spending so much time together? Those questions are answered here. You have the tag teams who got along great from day one — The Kentuckians, Rip Hawk & Swede Hanson — and those who remained virtual strangers despite spending years on the road together — Art & Stan Neilson.A couple of other questions I always have is who particular wrestlers were trained by and how they broke into the business and that is covered here, too. In addition there are the endless stories and anecdotes about some of the most outrageous characters in a business filled with them — Buddy Roberts (one in particular about Buddy stepping off an airplane in Israel), Don Fargo & Dr. Jerry Graham (who both merit separate books of their own), the list goes on and on.

There are many poignant moments, too, such as Hartford Love of the The Love Brothers talking about how he quit the business in 1988 shortly after the tragic car crash that took the lives of Adrian Adonis, Pat Kelly, and “Bearman” Dave McKigney in Newfoundland. “All these guys were good guys,” he said, and it made him not want to be on the road anymore.

Special mention needs to be made of the excellent photos throughout the book including many vintage publicity and action shots which add to the overall package.

The Pro Wrestling Hall of Fame: The Tag Teams is a delight to wrestling fans and one great read.

DONN WINGATE has been the co-host of the cable access television show The Prima-Donns on Wrestling with Donn Searles in Minneapolis-St Paul since 1995. This is his first piece for SLAM! Wrestling.