As I take more and more time to heal, I have more and more time to think about the places I’ve been and the things that I have seen along the way. Now I haven’t been everywhere or seen everything by any means, but I have spent quite a bit of time in some of the more “historic” areas, mainly the Stampede territory and recently the famous Memphis territory.

The similarities between the two are many. The most easily spoken of and related to are the amazing fans both territories have. Each territory has its stars and villains and some have worked both areas. But the one constant is the fact that the fans are rabid for their brand and will kill to defend its good name. 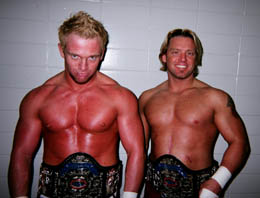 Eric Young and Johnny Devine as champs in Memphis

When “Showtime” Eric Young and I made our way to the Memphis territory in February and won the Mid South Tag titles from Too Cool Two, the people there went nuts!! It was quite apparent outsiders were not welcome.

It really is Lawlerland. The following and coverage of Jerry Lawler’s territory is legendary. Anyone who has followed wrestling at any time in the last 30 years has heard references to the historic Mid South Coliseum and the battles that were waged there: Andy Kaufman, Jim Cornette and the Expresses (Rock and Roll, Midnight, etc.). The list of names is long, but all important to this wonderful business called wrestling because they have been gauges that the wrestling world as a whole have used to create new and exciting stories and characters.

Don’t kid yourself into thinking that most of the best ideas and characters you know and love didn’t come from Memphis. They probably did.

The thing about Memphis is that there are so many great minds there that it’s hard not to succeed. In its current incarnation, Jerry is still King but behind him sit some great minds.

The Master of shill and fill, Jimmy “The Mouth Of The South” Hart sits at the right hand of the King and is an invaluable source of all information and ideas. And the left hand is Cory Maclin, the leader of Maclin’s militia and Lawler’s current foil. The interest and ratings these guys generate for TV in the Memphis area would set most TV execs on their asses. Truly it’s ridiculous. In a world where promotions have trouble filling bingo halls with 1,000 people, these guys can draw 5,000+!! Yes you read that right! And why don’t you hear more about Memphis!? I couldn’t tell you. I can only speculate that they fly under the radar by choice, because if they wanted, I’m sure they could be “bigger.”

The big news recently in Mempho though, is that they have moved fro the ultra historic Mid South Coliseum to a newer more modern venue, the DeSoto Civic Center in Southaven, Mississippi. Some call it sacrilege, but in the long run its a better financial and pleasing venue.

“We felt the Civic Center is newer, safer and more modern,” Maclin told the Memphis Commercial Appeal newspaper. “It’s not going to cost our fans any more money, but we’ll be able to give them more bang for their buck.”

To be honest I can’t wait to return to Memphis, er, Southaven, and “break in” the new digs. Oh, and get back the tag titles we had stolen from us when I got hurt. Heh, heh.

Stampede was kind of the same way back in the ’80s. There was a rabid fan base that turned up week after week to fill the 2,000-seat Corral. There was a vast array of wrestlers and real mix of talent. Giants, midgets, good guys, bad guys and some of the most revolutionary performers and ideas seen in years.

I used to spend hours in Stu Hart’s basement Dungeon going through old programs and magazines looking at the history that had passed through the territory. It was one of the best territories, reportedly, to work for during an era before monthly and almost weekly pay per views. And like the Memphis area, they loved their wrestling.

I was included in that time period of fans. Stampede was a religion. On Saturday afternoons, that was it and, if you could make it, Friday nights at the Corral for tapings. I remember Owen Hart and the nefarious Karachi Vice feuding for the North American title and “the Toilet Bowl” Mahkan Singh (also known as Bastion Booger, Norman the Lunatic or by his real name Mike Shaw) once leaving my hero Owen a bloody mess after attacking him from behind and using a foreign object! I was incensed!! I wanted justice and was denied for weeks! My youthful bloodlust was building to a fever pitch when justice was served and Owen beat Mahkan for the title and fulfilled my dreams!

It’s sad now. You really don’t see the same level of enthusiasm or love for the performers as they had back then. Children, and particularly little girls, used to cry when their idol was brutalized by an evil baddie. Now the best we can get is a “Holy S**T” when a hero is powerbombed through a flaming table or crushed with a chair. And crowd response only comes from Pavlovian preconditioned catch phrases and tag lines. I hope that my kids will be able to feel the emotions I felt as a child for my heroes one day.

Back to the current day, I was lucky enough to be in attendance at Sunday’s Warrior 1 show in Oshawa (Toronto), Ontario, and I want to send a congrats to Nick “Sinn” Csevetivjalwifruxhsidncich (the most confusing last name ever) on putting the thing together. Crowd was around 1,300 and, for an indy in Canada, that is a fantastic number. And by all reports everyone had a great time.

It was great for me in a therapeutic way as I have been jonesing hard for some action and I got to accompany A1 to the ring and punch out Pee Wee the ref after the Team Canada tag — sorry about the stripping you down in the ring Pee Wee!!

I will be getting my fixes, though, in the next month, as there are a couple shows around Windsor in July. Sunday, July 10th is the Prime Time Wrestling show in Belleville, Michigan, headlined by Raven and Friday, July 22nd is the big Hart Foundation reunion for Border City Wrestling in Windsor. So next month shouldn’t be too bad.

And returning to TNA doesn’t seem that far off now so I am hoping I can hold it together a little longer.

Till next time kiddies. Stay Hot.