The ring robe is more than 50 years old now. The colors have faded from a rich blue to a dirty white, and the ermine frills are long gone. Yet when Bob Adessky dons the robe in his dining room, he’s transported back in time. He wants to hit someone again. He wants to be the heel.

Now 78, “The Canadian Jewish Wonder Boy” Adessky hasn’t had anything to do with wrestling for 40 years. But he’s got his robe, his scrapbook filled with yellowed clippings, frayed programs and photos falling out willy-nilly. He even has an old letter he’d written to try to get booked in Montana, and a copy of the contract he signed to promote in Burlington, Vermont in 1961. 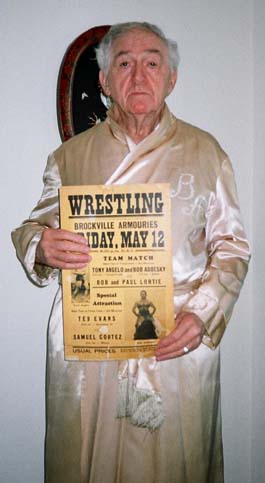 Bob Adessky poses in June 2005 with a poster from a Brockville, Ontario show in the 1950s. – photo by Greg Oliver

Across the table, though, is his most precious memento of those days in the ring — his wife of 53 years, Shirley, for whom he gave up the road. Together, they built a prosperous heating and air conditioning company in Montreal.

And the best stories Adessky tells are the ones his wife can help out with.

How about that time in Iberville, Quebec? Adessky had brought Shirley to the matches as his date, but, of course, he couldn’t sit with her. He was fighting that night. Primarily a heel during his career, Adessky asked his opponent to throw him out of the ring on the side where Shirley and some of her friends were sitting. Bob took great glee in antagonized one of them. “He turned white as a ghost!” Bob recalled with a hearty laugh.

But the best story involving the two of them is the honeymoon story. Just married in March 1952, they went to New York City to see the town. They got hooked up for tickets to the quiz show The Big Payoff, hosted by Randy Merriman and former Miss America Bess Meyerson. In the audience the first day, they filled out a form asking about their professions, and Bob listed pro wrestler; they were asked back for the next day, with Bob as a contestant. Before the taping, Adessky and Merriman talked about a little skit they could do where Adessky got the host in a headlock; Adessky recalled asking for — and getting — the answers to the three questions he’d be asked. He got the first two right, then blanked on the third. Using his wrestler’s well-honed reactions, he got Merriman in a headlock and quietly squeezed the answer out of him so the cameras wouldn’t catch it. Yet when he let go and answered, Bob goofed up the spelling of “periphery.” The trip to Paris for the newlyweds went out the window, as did the mink coat. Shirley did get a nice dress and a hefty bottle of perfume. It was so big that when it got shipped back to Montreal, Bob and Shirley couldn’t afford to pay the duty to get it across the border! (Interesting aside: In the 1940s Randy Merriman emceed local wrestling matches in Minneapolis and St. Paul.)

Born in Montreal in 1926, he had a rough go of it as a 14-year-old boy. “I was a tall, lanky kid, skinny kid with freckles and flaming red hair. The kids in school used to kick the shit out of me. They used to tease me,” he told SLAM! Wrestling. “I’d come home crying in Montreal.” An uncle took him down to the Jewish Y to build himself up. Besides capturing a few amateur bodybuilding medals and setting a leg press record at the Palais Nationale, Adessky also learned amateur wrestling, in which he was pretty successful.

At 6-foot-2, with a 78-inch reach, and weighing in at about 205 pounds, he was scouted and trained for pro wrestling by Bob Lortie. After just a few months of schooling, he made his debut in 1946.

It was only natural that a lot of his matches came against the Lortie brothers, his mentors and very seasoned pros. Adessky recalled a bout at the Brockville (Ont.) Armories in May 1950, when he teamed with Tony Angelo to defeated Bob and Paul Lortie. “Coming out of the ring, the crowd went berserk,” said Adessky. He and Paul Lortie continued to go at it after the match, and as they started to get outside the ring, Adessky was stabbed with a long knitting needle. “I still have the marks today after all these years.”

Another story comes to mind when the name Bull Curry (before he was “Wild”) shows up in a November 2, 1950 clipping from Boston. Once, they had a bout in Quebec City and the snow was something awful; coming back from Quebec City to Montreal on the train, it stopped in Val Cartier, an army town. A whack of drunk soldiers got on the train, and one threw up on Curry. “He became so crazy. … ‘Bob, open the door!’ He wanted to throw the guy off!”

On Saturday, August 4, 1951, while working under the name Harry Steck, Adessky got the chance to face one of the top stars of all time in Buddy Rogers, in St. Jean, Quebec. The alias of Harry Steck came about because he’d lost his wrestling license working as a heel. “It was one of these situations where I was attacked by a spectator and I sort of lost my cool. It took about a half a dozen ushers and police to separate us. It was one of those situations where, I guess, I should not have done what I did. Sometimes you’re sorry for what you do, but once it’s done, it’s a little too late.”

“That crazy sonofabitch … there’s a knock on the door in my hotel in Toledo. I’d been out the night before. I’d arrived on the Saturday morning, and I went out with some guys that night until about two, three in the morning. About 8 o’clock in the morning, there’s a loud knock on my door.

Sleepy and naked, Adessky opened the door to let Pfeffer in. 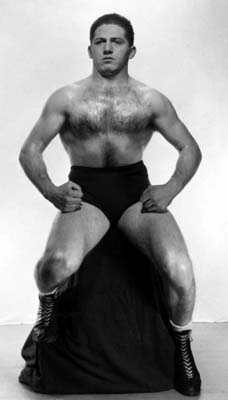 As with many wrestlers under his regime, Pfeffer wanted to brand them with a ring name of his choice. For Adessky, he chose George Valentine (not to be confused with Buddy Fuller, who worked under as “Cowboy” George Valentine in Georgia in the 1960s).

From Toledo, Adessky went to the southern U.S., working out of Nashville for Nick Gulas, but hitting everywhere from New Orleans to Birmingham, Alabama, and many tiny stops along the way. He was Southern Champion for a bit and worked against Gorgeous George in Nashville with Jack Dempsey as the referee.

During this year-long road trip-his only prolonged, significant one of his short career-Adessky was featured in Ring magazine April 1951. Wrestling Fan’s Book by Sid Feder (Key Publishing, 1952) called Adessky “one of the game’s roughest customers.”

Joe Gollob, a Montreal wrestling writer, got the word out about his friend Adessky as well, calling him “The Perfect Specimen,” “noted for his aggressive, will-to-win type of mat milling.” Gollob also mentioned Adessky’s real business of heating and air conditioning, as well as his hobbies/sidelines of stamp collecting, physiology and chiropody.

In 1961, having gotten off the road to concentrate more on his heating and air conditioning business, Adessky got a chance to get into promoting. Bob Lortie sold him half of his interest in Burlington, Vermont, for $1,000. The contract establishes that Lortie would “return to Adessky as his share of the said venture a minimum of $150.00 for each nightly promotion staged,” and that should Adessky wrestle on one of their cards in the semi or main event, he’d get $150.

A year later, Adessky was out. “The wife gave me an ultimatum,” he recalled — her or wrestling. With business booming in Montreal, it wasn’t a tough decision. Now, 53 years later, with three children and five grandchildren, Adessky is certain he made the right choice.

Mat Matters: Memories of bringing Bob Adessky (1926-2021) back into wrestling