Oregon’s long and storied association with professional wrestling dates all the way back to Portland’s first-ever wrestling show in 1883. During most of the twentieth century, the Beaver State, despite its relatively small population, was a hotbed of pro wrestling largely as a result of the efforts of promoters Herb Owen and his son Don. Especially under Don Owen, promoter of Pacific Northwest Wrestling for a half century from the 1940s to the 1990s, Oregon spawned or hosted numerous wrestlers who went on to become major stars in wrestling and, in a few cases, mainstream America. 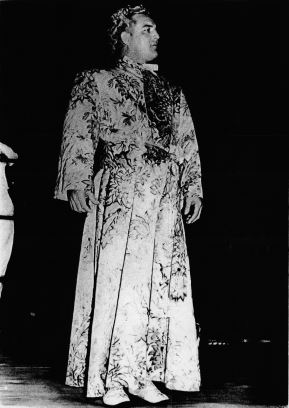 The biggest of these — and perhaps the biggest American mainstream wrestling star of the 20th century — spent several years in the late 1930s and 1940s developing his craft and his wrestling character in Oregon before becoming known coast to coast as Gorgeous George.

George Wagner was born in a small Nebraska town in 1915. After spending part of his childhood in wrestling-rich Iowa, which had a strong amateur wrestling tradition, Wagner did some wrestling as a youth in Houston, Texas, before apparently leaving high school at age 14 to help support his family. Like many other wrestlers of his day, Wagner worked for a time as a carnival wrestler — entertaining fairgoers and taking on challengers — before getting booked locally as a professional wrestler and then embarking full-time on a wrestling career while still in his teens.

Though enjoying some success and a few titles early on, George was far from satisfied with the struggle and level of success he encountered early in his wrestling career. While he showed promise as a smallish, good-guy wrestler with some sound amateur moves, George decided that his bland, dark-haired, regular-guy persona wasn’t likely to take him to the level of success he wanted to achieve in wrestling.

George and his first wife, Oregonian Betty Hanson — who Wagner met and married in a wrestling ring while he was gaining experience as a wrestler in Oregon during his mid-twenties — did some brainstorming and experimenting before hitting on the effeminate, satin-robed, glamour-boy type of character Gorgeous George would soon become. Reportedly, George Wagner had been following the exploits of a wrestler of similar size, Ohioan Wilbur Finran, who had hit pay dirt as Lord Patrick Lansdowne, a snobbish cheater accompanied by valets and adorned in expensive robes, whose stalling and shortcuts in the ring riled fans in a manner that George would take to an altogether different level.

George and Betty Wagner’s brainchild Gorgeous George was first unveiled to a wrestling audience in the early 1940s. Reports indicate that a woman in the crowd referred to George as “gorgeous” when he was fussing over his new robe and the name simply stuck. University of Tampa journalism professor and Gorgeous George biographer John Capouya sheds further light on the incident, confirming, in his provocatively titled book, Gorgeous George: The Outrageous Bad-Boy Wrestler Who Created American Pop Culture, the woman-in-the-audience story but adding that the woman was actually Betty. According to Capouya’s account, Betty, seated at ringside at the Eugene, Oregon, National Guard Armory while George made his ring entrance and proceeded to twirl and model his blue satin robe, said to her mother, “He’s gorgeous!”

While the early 1940s saw many wrestlers and other athletes take a detour into military service, Capouya reports, “George reported to Lane County [Oregon] induction centers many times, took his physicals (at the first one he weighed in at 185 and was measured at just five-foot-eight and a half), and got his serial number. Yet he never served. For five years he was granted one deferment after another, including a mysterious 4-F exemption, meaning he was unfit for military service for ‘physical, mental or moral reasons.'” No doubt, those deferments helped reinforce the public’s negative opinion of Gorgeous George as he performed before home-front audiences — in the Northwest and throughout much of the continent — and continued to hone his bleached-blond, effeminate, cowardly, dastardly, demeaning character in one arena and territory after another.

After leaving Oregon — where opponents had included Bulldog Jackson, Elton Owen, Herb Parks, Tex Hager, Milt Olson, and George Dusette — Gorgeous George established himself in the major media centers of Chicago and Los Angeles and became one of the biggest stars during the early years of national and network television in the United States. As Capouya puts it, “Gorgeous George did as much as any single person to ensure that new device became a fixture. [He was one of] the first true stars of the medium that would change American life, and in that transformation the transformed George became a national celebrity. …[M]illions of postwar Americans gathered … as families, everyone from grandparents to newborns … in front of their massive TV consoles and tiny screens, laughing, hooting, and shaking their heads in disbelief at the Gorgeous One, entranced by the new technology that brought him and their living rooms so vividly to life.”

Much of George’s success was rooted in his efforts at self-promotion. Unlike many wrestling characters of his own day — and countless more since then — Gorgeous George was not the creation of any wrestling promoter but of the wrestler himself — and, in George’s case, his wife Betty. As Capouya writes, “He and Betty did it all on their own. Unlike the Hollywood movie stars George would later rub egos with, he had no studios supplying him with scripts and directors, or choosing his parts. … They became the writers, directors, publicity agents, wardrobe supervisors, and key grips of their own feature presentation,” which they were never hesitant to bring to the public’s attention. 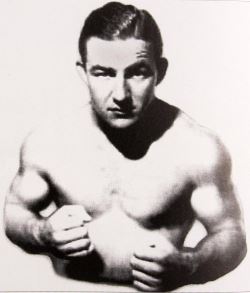 George Wagner before he was “Gorgeous.”

Upon arriving in town for a match, George was known to tip off the media and then head for a beauty parlour or cook up some other stunt to get the masses in line for tickets to watch him get the beating he was due. And then, in the arena, George would rile the crowd by marching to the ring to “Pomp and Circumstance” before fretting at length over the referee’s intention to put his hands on George as part of the customary pre-match inspection. George’s valet, meanwhile, would be perfuming the ring with a spray gun. George would toss roses and “Georgie pins” — or gold-plated bobby pins — to members of the snarling crowd, hurl a few insults at his opponent or the audience … and then, when he was good and ready, he’d lock up with his frustrated opponent before usually finessing or cheating his way to victory.

Over the course of his three-decade career — two-thirds of it as Gorgeous George — George Wagner won several titles, including two regional world heavyweight championships. At his peak he earned more money than any other American athlete with the possible exception of Joe DiMaggio. Aside from being an A-list entertainer himself, he was acknowledged as a significant influence by other A-listers including James Brown, Bob Dylan, and Muhammad Ali, and George’s influence was obvious on many wrestlers who followed him.

Apparently due to bad investments, George’s finances fizzled late in his career. On top of that, as Dwight Garner reports in the September 18, 2008, New York Times, “the demons that had chased Gorgeous George caught up with and pummeled him. He became an alcoholic; he lost his looks; women claiming to have had children with him began climbing out of the woodwork.” And then, less than two years after his retirement due to a liver condition, George, aged 48, died of a heart attack.

While the legend of Gorgeous George lives on largely as a result of his nationally broadcast television appearances from Chicago and Los Angeles, his connection to wrestling in the Pacific Northwest should not be forgotten. George was a popular attraction in Oregon, Washington, and British Columbia for many years; but far more, while George Wagner may have come into the world in 1915 in a small Nebraska town before moving with his family to Iowa and then Texas, the “Human Orchid” Gorgeous George was born 26 years later through a lot of ambition, determination, and hard work — on the part of George himself and on the part of Oregon’s Betty Hanson.