Many musicians have had a passing interest in wrestling, but none have maintained a steady love for it more so than the rockabilly icon, Johnny Legend. He has been involved with wrestling in one way or another since the early 1960s, meeting Gorgeous George while still in Junior High. SLAM! Wrestling was granted a rare interview with the Rockabilly Rasputin on the occasion of his newly remastered DVD release of the Gorgeous George film, Alias the Champ, released in 1949.

No one better describes the presence of Legend than Hollywood screenwriter and lucha libre historian Dan Madigan in his book, Mondo Lucha A Go-Go: “You have to know Johnny to really get a feel for the guy; words and descriptions can’t quite cut it. With his trademark flowing white beard and an unquenchable thirst for the bizarre in life, Johnny has seen and done it all in the underbelly of Hollywood.”

In fact, Legend was born with an appearance that shocked doctors and nurses as soon as he came out of the womb in 1948: he was born with white hair. Minutes after his birth, nurses dubbed him Gorgeous George, and his parents took that as a great compliment.

Since then, Legend truly became a legend among rockabilly musicians, and has followers all over the world thanks to his contributions to the genre. In short, Rockabilly is a mixture of 1950s rock n’ roll and “hillbilly music,” (as it was called in the 1950s, but known by the far more tamer name of “country” now). Elvis Presley, Carl Perkins, and Bill Flagg all were Rockabilly at one point or another in their careers. It could be argued that the tough edge of rock and, more importantly, its showmanship came from its Rockabilly side. Effeminate emo wimps its performers are not. Nor should Legend be confused with the gospel singer who appropriated his name in 2004 — comparing the two would be like comparing Goldberg with Gillberg.

Legend credits much of his showmanship in Rockabilly to his admiration of professional wrestlers, specifically Gorgeous George and Classy Freddie Blassie. In the early 1960s, he finally had the opportunity to meet George.

“We found out he had a bar over on Sepulveda Blvd., which was only a few miles from where we lived. We were in Junior High at this point,” he reveals. “And we went over to Gorgeous George’s Ringside in Mission Hill. It didn’t even dawn on us that we shouldn’t go into a bar [at our age]. We didn’t drink anything. We talked to him for an hour or two and took a lot of photos with him, which we still have.”

The impact of meeting George changed Legend’s life. Not only had he met the wrestler he had admired from afar, but he felt a connection with him.

But by then, George’s career was coming to a close, and Legend remembers that despite his energy, George was a sad and depressed man by that time, forgotten by the world that had once idolized him. “After we left the bar, we noticed that not one person came into the bar. There were no regular barflys. Nothing. And that wasn’t a good sign,” Legend reflects.

When they entered the bar and left the bar, George was in the same position: “George was just sitting there on a stool.” Acting as his own barfly, he sat with his beers, tipping himself with memories of the past to avoid thinking of the emptiness of his present existence.

Legend and his friends did not want that to be their last memory of him, so they convinced their parents to invite George over for dinner. Their parents thought this was some kind of joke, since George was a celebrity, as if some Grade 8 kid today said to his parents that The Rock was coming for dinner.

But Gorgeous George did indeed show up for dinner at Legend’s friend’s house. “My friend’s mother made a 15-20-pound ham, and he took half the ham. I had never seen anyone eat so much in my life,” Legend laughs. “He also had quite a bit to drink, and then he just flopped over on the couch and passed out.”

His friend’s horrified mother did not know what to make of this larger than life character drunk on her couch, but Legend and his friends assured her that everything was under control — a foreshadowing of Legend’s future when he had to control drunk and inebriated wrestlers under his care. 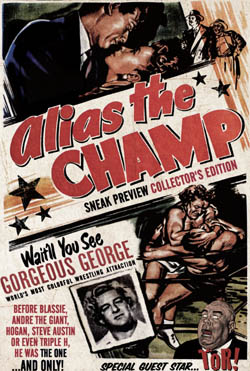 Legend thought fast, and when George came to his senses nearly an hour later, Legend was ready with an old fashioned cassette recorder, to interview him. George was very open with Legend, and spoke about wrestling for hours, uncensored and without hesitation. As Legend heard the stories spoken into the tape recorder, he became entranced, and realized that this was a world he had to enter.

Over the next decades, Legend met and befriended wrestlers, including Classy Freddie Blassie, and became an influential filmmaker and proponent of free speech — but that’s a story for another day.

With the release of the acclaimed biography of Gorgeous George by author John Capouya, Legend feels that the time is right for a new generation to appreciate the brilliance of George.

Alias the Champ is a film that would have been forgotten forever, were it not for Legend’s intervention. “There are no negatives, no old tv prints, nothing is left of this historical document,” Legend points out. He said it would be similar to Hulk Hogan’s first film being gone forever 50 years from now.

Legend was always on the look out for the film: “[I was] obsessed with the movie since no one showed it on TV. Through sheer luck, we found a 16mm original print of the film in the early ’70s.”

The film doesn’t mock wrestling, but treats it with respect, thanks to American culture’s deification of George when it came out in 1949, Legend says. “George was at his peak. It’s a fascinating curio of its time. George was literally on a par with Hulk Hogan. He was as famous as the Beatles [would become in the 1960s]. He was like Groucho Marx. For people who never watched wrestling, they would know George.” 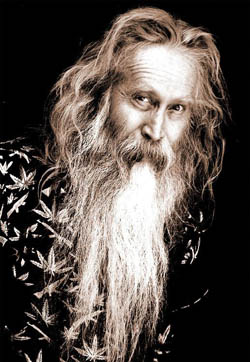 Beyond that, Legend says, “It has Robert Rockwell in it, who was a great character actor. And it also stars wrestlers Bomber Kulkavich, Count Billy Varga, Sammy Menacker, and the legendary Tor Johnson.”

Legend wants his DVD of the film to be accessible to younger audiences, so he has included some extras to make it more appealing. First and foremost, he has included a complete Gorgeous George two-out-of-three falls match against Doctor Lee Grable. “Hosted by Dick Lane, it’s about 30 minutes long, and you see him actually wrestling,” he says. “It’s a rare historical document of what American wrestling was like in the ’50s.”

He has also included a 1940s short film that was shown in many theatres, after the obligatory newsreels, that is one of the earliest documentaries about professional wrestling. Called “Scrambled Legs,” it is also significant because, according to Legend, “It has one of the earliest representations of women’s wrestling, [and depicts one female wrestler in particular] who wore a lot of fancy clothes, with a really advanced gimmick, ahead of her time.”

Legend says that it would be a real tragedy if stars from the ’50s and ’60s were forgotten or just became footnotes in wrestling books. “[For example], Everyone should know about the high flying genius of Edouard Carpentier, and Tricky Ricky Starr!” Legend exclaims. “Theirs and many others contributions should never be forgotten.”

At a time when many feel that American wrestling is suffering from a collapse of creativity, Legend suggests that by looking to the past, answers might be found for wrestling’s future. When the depth of wrestling history for some Creative departments begins in the 1980s and confines itself to only one company’s history, at that, one should not be surprised to see the state of affairs as they are. Alexis de Toqueville once wrote, “When the past no longer illuminates the future, the spirit walks in darkness.”

Legend is by no means suggesting that the answers to improving wrestling lie in the past, but that a fuller understanding of its history can help it advance into the future. Legend says, “Fans should watch the evolution of the sport. They should know its history, in order to better appreciate it.”

His release of the Alias the Champ DVD goes a long way into opening up the secrets of wrestling’s past.