The many battles of Billy Taylor

As a former professional wrestler, Nova Scotia’s Billy Taylor was involved in more than his share of battles in the ring during the 1950s.

After his wrestling days were over, he continued his ring battles but this time with a slightly different connotation. When he hung up his wrestling boots for the last time, Taylor began a career as a policeman in 1958 and for the next 31 years he spent a great deal of his time trying to combat theft rings in the Port of Halifax. 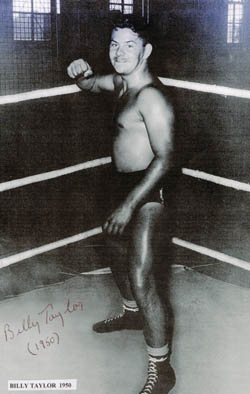 What amounts to a fascinating career both in and outside the ring has now been captured in a tell-all book, Cracking the Theft Rings: the Story of a Cop at the Port of Halifax (Frontlist Publishing, Calgary). The book was penned by Billy along with writer and communications consultant Andrew Safer and is set to hit bookstores any day now.

But to fully appreciate how Billy Taylor survived three decades of fighting crime on the Halifax waterfront, one has to first become acquainted with the man’s professional wrestling career.

Taylor was born in Halifax in 1932 and with his parents lived a life of poverty throughout the Depression years. He became involved in amateur wrestling at age 13 and by 17 was working as a defense instructor for the Halifax Police Department. During a 22-year period, he trained over 2,500 policemen.

As an amateur who was gaining a reputation as a tough guy to handle, Taylor worked at local fairs taking on all comers. If anyone could last two minutes with him, they could earn five dollars.

He welcomed the chance to earn a few bucks in this capacity, for as a child of the thirties, Taylor had limited education and it was not yet clear how he was going to make a living. That problem was soon solved however when he turned pro in 1950 working for promoters Clary Harris and Alva Brown. Later, he hooked up with promoter Cowboy Len Hughes in Halifax.

It may have been preordained that Taylor would earn his daily bread bouncing bodies in a wrestling ring since his grandfather carved out a reputation as a bare-fisted fighter and wrestler after being sent over to Canada as a 12-year-old orphan from Aberdeen, Scotland. In that era in the Maritimes, matches were staged in the open fields, barns and bar rooms. Some fighters also earned their money by bootlegging, rum running and operating the local whorehouse.

It didn’t take Taylor long to adjust to the pro wrestling lifestyle after getting a taste of the ring and the money that went with the game in the 1950s, not that far removed from the Second World War and a Great Depression. 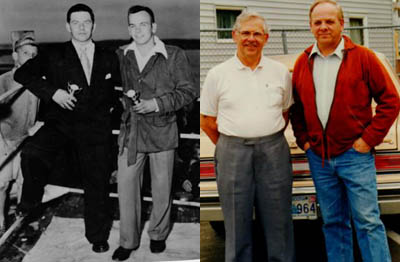 “I was paid $25 for my first match,” Billy recalls with pride. “It was against my friend Al Zinck.”

Never having had any money as a kid, Taylor knew he was on to a good thing. He worked for Hughes throughout the Maritimes. The promotion included Halifax and Sydney as well as Moncton, Fredericton and Saint John in New Brunswick. Spot shows were also held in various places. Matches were not held in the winter months but rather than travel to other territories, Taylor preferred to remain in Halifax where he worked at different jobs in the off season. 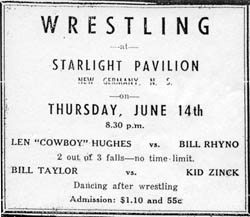 But he enjoyed the wrestling business. He was not formally trained but just naturally picked up all the tricks of the game. He chose the role of heel and in the early stages he emulated tough guys Al Korman and Bull Curry who were on the scene when Taylor broke into the game. Other wrestlers working the territory were Manuel Cortez and Sal Balbo.

“I was a good villain,” he says with a source of pride. “I took my share of heat. But even though I was a local guy, no one bothered me outside the ring because I had developed a tough reputation. I always conducted myself as a professional and a gentleman and was polite with everyone.”

Though fierce and bullish, Taylor only tipped the scales at close to 200 pounds and stood 5-foot-6.

He followed a strict code, gleaned from his father when he first started wrestling.

“Always remember who you are, what you are and where you came from,” was the advice Billy received from his dad and followed for a lifetime.

Len Hughes also became a father figure to young Billy and always treated him like a son. It was also Hughes who encouraged Billy to shoot on several opponents who were a detriment to the promotion. It was a role Taylor did not relish or enjoy. After several occasions, he declined to shoot even though extra pay was offered.

“One of my best matches was against Jackie Nichols who was billed as the Junior Heavyweight Champion of the World. We went Broadway for a full hour and ended in a draw. Jackie put me over,” Billy recalls fondly. Nichols later sent him an autographed picture which he treasures to this day.

After his marriage in 1955 and the start of a family that was to number four children, Taylor started to think about more secure employment. He wasn’t interested in just any job; he was looking for a job that had a pension and other fringe benefits on the backend. He gave up active wrestling in 1958 when he became a policeman with the National Harbour Board in Halifax, a job he secured through his father’s political connections.

From the make believe world of professional wrestling, Taylor was tossed headfirst into the very real world of policing and organized crime on the Halifax docks and for the next 31 years he was consumed by it. He encountered a shady side of port life encompassing theft and corruption among the longshoremen, checkers, police, port administration and others employed on the docks. Cargo theft was rampant and Taylor had no shortage of opportunities to help stamp it out. 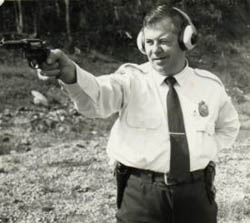 Determined and dogged as he was in the ring, Taylor met the challenges of police work head on and went on a personal mission to crack the theft rings in the port. It soon became known that he was one cop to avoid at all costs.

By 1968, the National Harbour Board was reorganized and nationalized as Ports Canada. Many of the older police officers who were involved in theft rings quietly left or took their pensions rather than adjusting to the revamped organization that was now heavily staffed by ex-RCMP officers.

There was no thought of Taylor ending his police career at that stage. Under the new set-up he was suddenly the most senior officer and was recognized accordingly by being awarded Badge #1.

Fellow wrestler Ossie Timmins, who later became Commissioner of Boxing and Wrestling for the Halifax Athletic Commission once, declared of Taylor: “He was a bruiser, tough as nails and would go toe to toe with anyone in the business.”

Whether it was on the docks or in the ring, Taylor was indeed a battler but perhaps his greatest battle was with the bottle. Illiterate until age 25 and later discovering he was dyslexic, paled somewhat in comparison to his life-long alcohol addiction. He hit a particularly low point in 1990 when his wife died suddenly of a heart attack and his drinking escalated.

“I was a chronic, though functioning alcoholic for 44 years,” he states openly. “From the time I started wrestling until 1994 when I joined AA and got my life under control.” 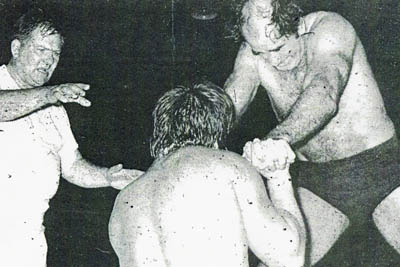 When Billy joined the harbour police his superiors refused to grant him permission to continue wrestling. However, he was allowed to referee. When Hughes retired from promoting, Al Zinck took over and Taylor continued to referee until 1986. He enjoyed his role as the third man in the ring and refereed when some of the greats such as Harley Race, Jack Brisco and the masterful Lou Thesz passed through the Maritimes. He vividly remembers refereeing a boxing match between Yvon Durelle and Bull Montana who were both wrestlers at the time but also accomplished boxers.

But his great enjoyment came from refereeing for the midgets. He would quite willingly become involved in the midgets’ pranks and pratfalls whereas some guys were leery of being ridiculed by the mighty mites. When Little Beaver would tie Taylor’s boot laces together, everyone, including the Beaver, Billy and the crowd would howl with laughter.

On one occasion in Happy Valley, Labrador, Taylor disqualified two of the midgets who were the good guys. The crowd became unruly and chased him from the ring. As the fans closed in on the beleaguered referee he saw an RCMP officer approaching him. Thinking he was in safe hands, Billy was astonished to discover that the Mountie also wanted to get a few licks in.

Blading was always a part of wrestling and Taylor confesses to employing the tactic on several occasions. But his scariest moment came as referee in a blading incident. It was a fact that some wrestlers were awkward when it came to blading themselves at which time the referee would assist.

In one bout involving Yvon “The Beast” Cormier in a chain match, Billy was tasked with opening Cormier’s forehead. He admits to being drunk that night and unfortunately for the Beast the razor glazed his temple cutting an artery. Cormier went into convulsions but fortunately survived the ordeal.

But the refereeing and attachment to the wrestling scene were a sidelight for Billy during an otherwise intense and pressure-filled existence in the port. Taylor didn’t play favourites during his career as he charged 19 police officers with waterfront theft and other criminal activities. 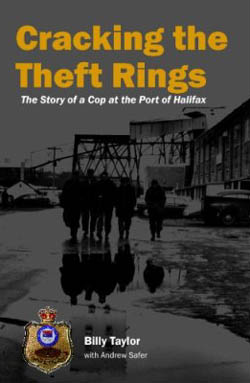 Billy’s complete lack of regard for rank or position often landed him in hot water and came to a boil in 1987. He had been vigorously investigating anyone whose activities were suspect. Several investigations became overly sensitive as he was getting too close to top officials in his crusade to clean up the waterfront.

Repercussions from the top were not unexpected. Suddenly Taylor was charged with obscene and offensive language to the public. Retribution was swift. Taylor was demoted to the rank of constable which would have greatly affected his pension. He appealed and was re-instated providing he would resign. Taylor relented, received back pay, a full pension and his rank of Sergeant was restored. He honourably retired in 1989.

In the wrestling ring, Billy Taylor won and lost many matches. In his personal life he lost more than a few bouts with the bottle. But in the real game of life, it dawned on him upon retirement that “No one strikes at the heart of port theft and wins.”

After leaving Ports Canada, Taylor worked as a special constable in the traffic division of the Halifax Police Department for several years mainly involved with traffic summons. Thereafter, he worked as a private investigator for a friend for a dozen years before completely severing his ties to the investigation field.

Finally at peace with himself, he finished a manuscript on his life story, a project he worked on for over a decade. The result is Cracking the Theft Rings, a book that will give readers another insightful look at professional wrestling. It will also expose criminal activities that were prevalent in a major Canadian port, something not widely known to the general public.

Never one to pick his spots, Billy Taylor not only clashed with the crime bosses but with those who were supposedly on the right side of the law. He didn’t always win but in the eyes of many, he was a good cop with a conscience.

After riding the waves through rough Atlantic waters for most of his lifetime, he now resides close to family in Lower Sackville, Nova Scotia, secure in the knowledge that the storms have finally abated.