There was only one Gorgeous George. The flamboyant, cocky, curled white hair wrestler was revolutionary in and outside of the wrestling world. John Capouya’s new book, Gorgeous George: The Outrageous Bad-Boy Wrestler Who Created American Pop Culture, tells the struggle, rise, and demise of wrestling’s first television star. 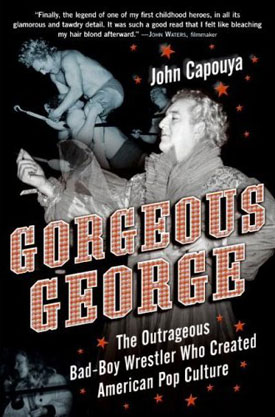 George Wagner, as he was born, has been the mark which all heels in wrestling have been judged. Even for those who never saw him wrestle, his name and what he brought to wrestling is known till this day. He brought wrestling to the family room, just as televisions were appearing in them.

His life in and out of the ring was less than boring. Capouya’s research explores the life of a man who was bigger than the ring, which ultimately killed him. He was a piece of American culture in the late 1940s and into the 1950s, but the fame was short and he would be dead by 1963.

The book talks about Wagner’s early years including his amateur wrestling background. Wagner floated for years in professional wrestling, mostly wrestling early in the show (and lightweight matches), making little money and questioning his future. But Gorgeous George was in Wagner early in his wrestling career as he married his first wife, in a ring, in 1939. Capouya goes in some depth through the book about his marriages and children, noting the influence his first wife had on his character.

Before Wagner became what many consider wrestling’s first true heel, little thought was put into the role. Sometimes the heel would just have a mean face. Other times, the promoter would have the wrestler announced as hailing from a foreign country. Few wanted to be heel, and few put much effort into it. Wagner knew if he could make the crowd hate him, he would become famous. It was what people now call “heat” in the business.

Coloring his hair, spraying perfume around the ring, wearing robes, he became the largest draw in wrestling, and also the richest. He was a television star, a celebrity and someone people loved to hate.

Gorgeous George was up there in fame with Bob Hope and Lucille Ball. His exposure was the greatest a wrestler could ask for. With his fame came many who admired his personality and connection with the crowd. Capouya takes a large part of the book to explore Wagner’s influence on American cultural history including Wagner’s effect on Muhammad Ali, James Brown and even Bob Dylan. Wagner was more than a wrestler, he was a showman.

Most agree that Wagner influenced the personas of wrestlers like Ric Flair, Jesse Ventura and Superstar Billy Graham.

The stories of Wagner’s influence on many famous people went a little long at times, and may have worked better shortened. The book is about Wagner yet the stories of influence are too broad for the book and end up hurting the biographical chapters.And not only was he the highest paid wrestler, often demanding a majority of the gate, he was earning more than most professional athletes of the day, including New York Yankee Joe DiMaggio.

Capouya explored what this fame and money did to Wagner out of the ring, including how it affected his family life. The behind the scenes stories are fascinating with most people at the time not knowing about the personal life of those they saw on television. This was all before Hollywood gossip had a regular section in every major paper.

Those who watched Gorgeous George on television did not know the true person. Wagner was a self-made man, who was actually considered poor before hitting his fame. He lived the life of a superstar outside the ring, to the point where it destroyed him.

Wagner was married twice, had two children, one of which was with a longtime mistress. Capouya really used lots of research to explore the personal life of Wagner, including court decisions and custody battles that Wagner often faced. His primary source is George’s first wife, Betty, and her story runs parallel to his.

In the ring, though, he might seem like all show, but he could wrestle. His “golden locks” were often a large part of her persona to the point that he was shaved bald in ballyhooed matches, including once against The Destroyer in 1961. He would retire shortly after the match due to ring injuries.

Not sure what to do with his life after wrestling, but with a love for alcohol, he opened his own bar.

With a background as an editor for Newsweek and The New York Times, Capouya’s research is among the greatest for any wrestling book written before, including rare photos of the early career of Wagner. Not being a big wrestling fan, however, also means Capouya leaves out a lot of important history from the squared circle, including George’s role in one of the most famous screwjobs in wrestling history, where he beat Don Eagle in 1950 for the world title.Gorgeous George: The Outrageous Bad-Boy Wrestler Who Created American Pop Culture aims far beyond just the wrestling book buying audience, and perhaps, that is why it has already been mentioned or reviewed by the likes of The New York Times, Sports Illustrated, Esquire and Entertainment Weekly.

Because little documents were made for professional wrestling during Wagner’s life, Capouya research was most likely hard. Dave Meltzer of the Wrestling Observer noted that it is one of the best researched wrestling books he has read. Capouya obviously used his experience in research to dig for some lost facts about matches and dates.

This is a book for those who love the history of wrestling, as the topic is one of the greatest and largest names to ever step into the ring. Wagner is the cornerstone for what would become an ideal heel, and is a strong read for those who want to know how it all came to be.