Kevin Bennett brings a unique blend of athleticism and rap music to the ring. Dubbing himself “The Remix of Pro Wrestling” Bennett also works as a producer and audio engineer. But professional wrestler is the profession that defines him. 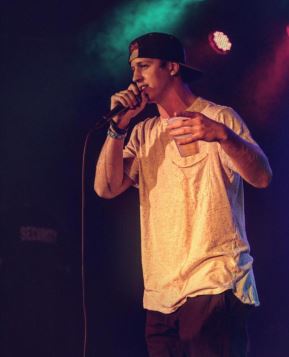 Kevin Bennett at the mic.

On Sunday in Toronto, Bennett is set to square off in a grudge match against Franky TM on at Smash Wrestling’s Metal Gear Smash at the Opera House. The 19+ event, starting at 5 p.m., is a television taping for the Fight Network. Bennett’s work as a heel in Smash has been a part of the company’s growth.

Bennett, a 6-foot, 180-pound grappler from Buffalo, NY, answered a few questions about his time at Smash Wrestling and his role in the rap group Evident Truth.

Q: When did you start with Smash Wrestling?

A: I did not, actually. I tried to get the fans on my side! It did not work, no matter how nice I was. No matter how much I smiled and tried to enjoy my time, they would proceed to give me the middle finger. So, I had no choice but to lose it and flip the hell out.

Q: How has Kevin Bennett evolved from when you first started in Smash Wrestling to the present day?

A: I’ve gained a whole lot of confidence since I debuted in Smash Wrestling. My whole persona has evolved and is still evolving. I’ve also been training hard on a daily basis, bettering myself in every aspect. I’ve grown as a performer and I can’t wait to see what the future holds for The Remix.

Q: How has Smash Wrestling evolved since you joined the promotion?

A: Smash Wrestling truly is “a cut above the rest”. It’s one of a kind! It’s everything an independent wrestling promotion strives to be. The production value, the talent, the staff, the fans are top notch. Everything is getting better and better each month and will remain that way. 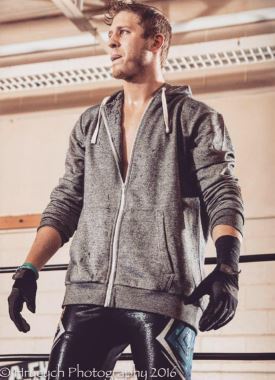 In the ring. Photo by Joe Hrycych.

Q: How is it working with your teammates Big Tank and The Muscle?

A: I’m thankful that they have my back. They’re my brothers and that’s all that matters. Without Tank and The Muscle, I wouldn’t be able to get the point across. We’ve made many great moments and I’m sure there will be plenty more. They are also up and comer performers who get better every day, so keep an eye out for these guys.

A: Franky TM is out of his god damn mind.

Q: Describe your role in the rap group Evident Truth.

I was the rapper, vocalist, producer, audio engineer of the group. I made all the beats and structured them as far as where verses and hooks went. I wrote lyrics, sang lyrics, rapped lyrics, also edited, mixed, mastered everything. Can’t forget about all the music videos I edited as well. I’m a digital media machine.

Q: What can people expect Sunday October 29 at the Opera House in Toronto?

A: They can expect the Remix of Pro Wrestling to take the W, put Franky TM in his place once and for all and of course, DO IT. ALL. BY. MYSELF.