Hip hop and wrestling have been a part of Kevin Bennett’s life since childhood. His parents bought him a wrestling ring at 13 years old, while his older brother introduced him to the music.

Years later, those talents came together between the ropes to turn the humble and quiet Buffalo, N.Y., native into the brash, cocky, trash-talking via rap videos “Remix.” 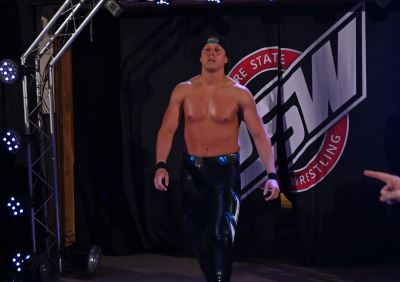 Bennett, who debuted Aug. 7, 2010, said he was “always iffy” about melding his hip hop and wrestling careers because of potential stereotyping.

“When I first started doing this whole rap thing, people look at me, and they don’t immediately think ‘rapper,'” Bennett said. “[As a] white guy with long blonde hair, I was always afraid of that.”

He said he didn’t want to come off as if he was trying to be like John Cena, but Smash promoter Sebastian Suave saw one of Bennett’s music videos and said it was a crime, according to Bennett, that he not mix the two.

LEARNING FROM A BACKYARD IDOL

Bennett, who started wrestling as a teen, said that, for him, the industry was “like an obsession that just kind of kept going.”

That’s how he found a home promotion to follow in Buffalo, N.Y. However, his actual training story, he said, is “a little different than most.”

Danny Danger, an east coast independent wrestler, was one of Bennett’s “backyard wrestling idols” and traveled from Pennsylvania to Buffalo, N.Y., to train Bennett and his friends in the basics — in the ring Bennett’s parents bought for him.

“I thought it would be a perfect opportunity to show them the ropes so they could properly protect themselves and each other,” Danger said. “That’s when I first began to train Kev in the art of professional wrestling.”

“You could tell right away that he was passionate about wrestling and wanted to learn everything he could about it,” Danger said.

The now-retired Danger said he is “consistently amazed” at what Bennett has accomplished and become throughout his career.

“He has gone from a skinny, pale kid wanting to be a professional wrestler, to one of the best on the indies today,” Danger said. “He’s tripled in size, become a champion multiple times and wrestled names that he grew up watching.” 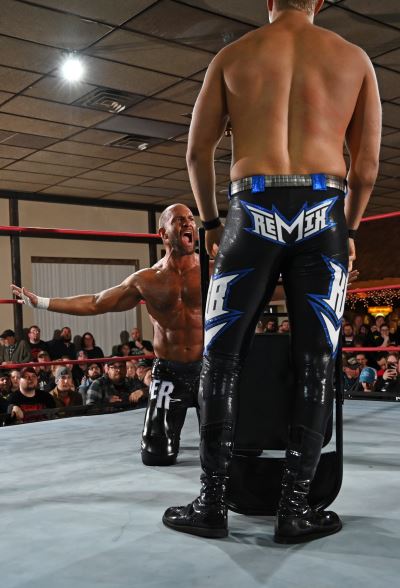 Pepper Parks is at the whim of Kevin Bennett. Photo by Joe Hrycych, www.hrycychphotography.com

Bennett’s interest in rap and hip hop started when his older brother, who had friends who were rappers, played him their music. Bennett was “mind blown.”

“I was almost starstruck… I’ve always had a creative side to me,” Bennett said. “I loved to draw as a kid. I just like making things of my own. I just like to create, in a sense. So I tried it out myself.”

He had a keyboard, a microphone, a radio that recorded cassette tapes, lyrics he wrote and a younger brother, as well, to bring the songs to life.

“It was one of those things like with wrestling, I loved the entertainment aspect of it,” Bennett said. “I continued eventually doing research and how can I make this better, how can I do this all myself.”

He eventually learned to make his own beats, record his own work and become a “mix master,” with influences ranging from Tupac and Jay Z to Eminem and 50 Cent.

Once he decided to incorporate that aspect of his life into wrestling, it was a slow transition — a transition that started at the urging of Suave, who saw a video of Bennett performing at a concert and took note.

“His presence and comfort level in the video was top notch,” Suave said. “He clearly had a gift.”

But Danger, said he initially hated when Bennett brought his other skills into the ring.

“It just wasn’t something I saw him doing on the indies,” Danger said, “but he proved me all the way wrong on that one. He has incorporated it so well, and had great success with the gimmick. It has given him more of a character, and it’s a character that’s real.” 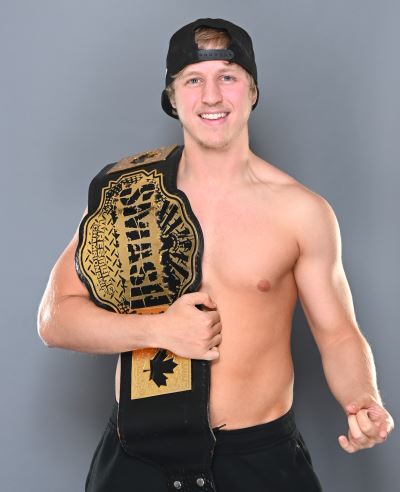 GOALS OF GETTING SIGNED

Since that first outing, Bennett said, his growth as the “Remix” Kevin Bennett has allowed him to build a brand and a name.

“I feel like it’s boosted my value,” Bennett said. “I feel like there’s more of a reason to book me now.”

Another aspect that Bennett said sets him apart is that he is more than a rapper.

“I’m not just a rapper. I produce the beats. I obviously write the beats, I record it,” Bennett said. “I’m the entire production. I’m self-taught. It’s one of the slogans I have: ‘I do it by myself.'”

Bringing his music interests into the ring also led to opportunities outside of the squared circle. Bennett has created entrance music for wrestlers in the northeastern United States, as well as Ontario.

Within the next five years, Bennett said, he sees himself being signed to a “major wrestling company.” And that will determine how his music career grows.

“I think what’s going to happen is, when I get that contract and that opportunity, my music is going in a whole different direction,” Bennett said. “I feel like wrestling is going to mold my music career, and that’s when opportunity will come up.”

For now, Bennett said, he plans to drop a mixed-tape project within the next couple of months.

And from his first trainer’s perspective, Danger said he feels Bennett has been overlooked in the wrestling world.

“He should have been scouted awhile ago,” Danger said, “but all good things come with time. Within the next few years, it’s not a matter of if, but when, he will be signed to a major company. He’s got the drive, passion, and talent to make it big. I am looking very forward to that moment.