JOHNSTOWN, NY – Part of the magic of attending the Pro Wrestling Hall of Fame induction ceremony is the interaction between the wrestlers, especially once they get on the microphone.

In essence, everyone seems to have a story on everyone else, and that was evident Saturday night at the PWHF’s 12th ceremony. 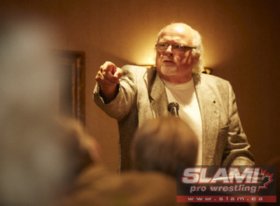 Bill Watts singles out someone in the audience during his induction speech. Photos by Andrea Kellaway

Bill Watts, one of six living inductees in attendance, is the prime example of how this works. First off, he wrestled in the New York area, main eventing in the WWWF, so knew a lot of the local wrestlers in attendance. Then he worked territory to territory, ran the Mid-South/UWF territory, and then behind the scenes in WCW and the WWF.

“I sure chewed a lot of asses,” admitted Watts the Promoter. But then he got a little more comfortable at the podium and started shooting.

He reminisced about wrestling with the Assassins, with half of the team, Jody Hamilton, sitting directly in front of him. According to Watts, he and partner Dusty Rhodes bled every night, as did the Assassins under their masks.

Hamilton disputed this, alleging that Watts may not have spilled quite as much blood as the rest of them: “If you could call a fingernail scratch blood!”

“Cowboy” Bill also shared a crazy story about the football rivalries that the boys carried through from their college days, in particular the West Texas State alumni like Tito Santana, Tully Blanchard, Terry Funk and Ted DiBiase. On one occasion, there was a showdown with Paul Orndorff of Florida in the stadium. He made the room crack up with his impression of Dominic Denucci and his Italian accent, where “grapes” comes out like “grips.”

JJ Dillon told a wonderful story, tearing up, about how a kid from New Jersey, who used to produce a fan club newsletter for Johnny Valentine, wrestled one single time at Madison Square Garden in New York City — against Tito Santana, who was the Intercontinental champion. Dillon called the PWHF induction the “most prestigious honor ever bestowed upon on” and praised the transparent induction process. “It is an honour just to have your name on the ballot,” he said. “You have to be inducted by your peers.” Feted for his work as a manager, entering the Hall in the Colleague Division, Dillon closed with a sign that had been gifted to him by “Irish” Davey O’Hannon (also in attendance), which read, “Don’t Dream Your Life, Live Your Dreams.”

Tito Santana singled out Terry Funk, who was sitting in front of him, but balked at trying to do an impression of the Funkster. It was a chance meeting with Funk early in his career that sent Santana on the road to fame. Santana went on about the people who helped him — Tom Renesto Sr. was the booker in Atlanta who saw him as a star, Andre the Giant brought a tape of his matches to the WWF.

“I am so grateful for so many people,” said Santana, also mentioning his wife and three children. “My intention was to be in the business for five years.”

Jody Hamilton probably presented the longest list of people to thank, including Mike DiBiase (“my professor”), Ronnie Etchinson (“a walking encyclopedia of wrestling knowledge”), Bob Orton Sr. and Sonny Myers. The biggest praise was for his late partner in the Assassins, Tom Renesto Sr., “the best damn partner anyone could have.” That incarnation of the Assassins wrestled together for 15 years. “There is no one, there is no two, there is just the team,” said Hamilton.

As the emcee for the evening, “Leaping” Lanny Poffo got a chance to recall incidents with lots of people too, and share tales that he remembered his late father, Angelo Poffo, telling.

And everyone seemed to have a story about the late Dick Murdoch, who Terry Funk inducted.

When Wendi Richter saw Bill Watts earlier in the weekend, she said that he was the only promoter that had ever complimented her on the match she had; when he was at the podium, Watts apologized for not saying it more.

Richter, an inductee last year, brought up Joyce Grable, praising her skill as a trainer and teacher. “Nobody deserves this award more than Joyce,” she said.

Grable was positively lively at the microphone to begin, and felt she didn’t fully deserve the honour. “I am so unworthy of all the things,” she said. Her positive outlook continued even as her voice cracked, talking about her fight against cancer, and the bone marrow transplant scheduled for next week. “I’m gonna beat it because I am one tough old woman,” she concluded.

The final inductee of the evening was Baron Von Raschke. Like almost everyone, Raschke talked about how the PWHF honour is “from my peers” and therefore means so much more than “the political one,” as Watts labeled the WWE Hall of Fame.

Raschke shared the tale of his early journey, from an amateur star to setting up the rings for Verne Gagne, to Mad Dog Vachon seeing something in him and giving him his break — but not as Kurt Von Pumpkin, as Mad Dog wanted.

“You’ve made two people happy,” said Raschke, referring — in character — to the evil Baron von Raschke, and then the meek, quiet “Jimmy Raschke from Nebrasky.”

Naturally, the only ending for a night like this came from the Baron: “That’s all the people need to know!”