Q & A: Calvert tells all… about pro wrestling in Toronto 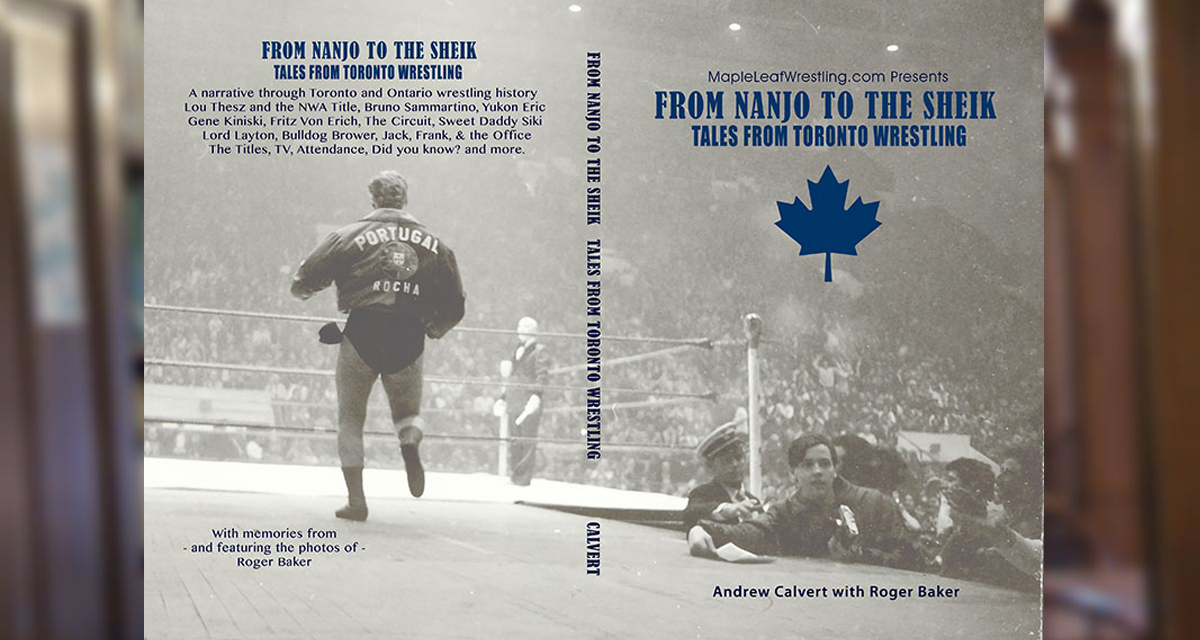 The rich history of professional wrestling in Ontario comes alive in chaotic detail in a new book by a pair of veteran Canadian wrestling journalists.

Wrestling giants of yesteryear like Whipper Billy Watson, Fritz Von Erich, Yukon Eric, Gene Kiniski, and Bulldog Brower come to life in the pages of From Nanjo to The Sheik: Tales from Toronto Wrestling by Andrew Calvert with Roger Baker, out now and self-published. (EDITOR’S NOTE: Both Calvert and Baker have contributed stories to Slam.) 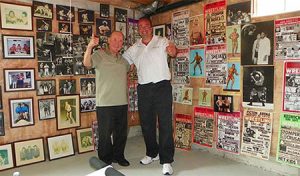 Baker and Calvert have decades of combined experience photographing and writing about professional wrestling, and their new book vividly captures the sights and the sounds of Ontario’s wrestling legacy.

SlamWrestling.net recently chatted with Calvert about why he and his co-author explored a remarkable time and place in wrestling history.

Slam: How would you compare the experience of writing From Nanjo to The Sheik to your previous book about the Canadian Heavyweight Title.

Andrew Calvert: I did the Canadian Heavyweight Title book with my friend Dick Bourne of the Mid-Atlantic Gateway. He did the design and put it together using his inimitable and creative style.

This one was more suited to a straight forward presentation due to the content and I had a clear idea of how I wanted it to read, more of a narrative than a visual history.

I wanted Roger’s photos to stand alone and act as a companion for the text which mostly worked well. It’s a tough balance between dates and facts and lighter content, to not get bogged down. The contrast with the history bits and Roger’s memories really worked well for that.

Slam: What was it like working with Roger Baker, whose contributions to your book through his photography and vivid memories must feel immeasurable?

Calvert: Roger is a treasure. I’m very fortunate to call him a friend and he has been our biggest supporter in our forays into the past.

He was a real superfan before he became a pro photographer so he has a unique take on the times. You can read the newspapers but in talking with Roger you can really feel the excitement of the era. Every time we talk it gives me a new line of research or another article and inevitably leads into more interesting pursuits down the time tunnel. 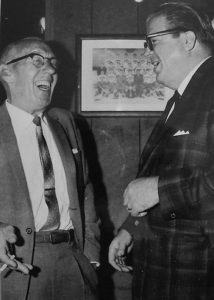 Also, having access to Roger’s vast collection from the ’50s helped fill in a lot of info that wasn’t readily available. We had previously done some Memories of Toronto articles and they were very well received, so I thought we could explore that as a long form. For me, it was an honor to have Roger involved, his work and memories deserve to be recognized, preserved and celebrated, and beyond that he’s just a great guy.

Slam: Tell us about the shows you saw at Maple Leaf Gardens.

Calvert: We used to make the trip to Maple Leaf Gardens from the suburbs regularly in the ’70s and ’80s for hockey, concerts, events like the Harlem Globetrotters, and of course wrestling.

I was a fan during the Mid-Atlantic era and saw all the stars: Flair, Race, Backlund, Bockwinkel, Andre, Brisco, Steamboat, Youngblood, Bravo, Dewey Robertson, and so on. We were fortunate at that time to get the best of the best and for a few years there as Toronto may have been among the top cities in the world.

I also went to some (Bearman) McKigney cards which were wild at the time, and much different as they were up close and personal. I loved the heels but cheered for the favorites, mostly. Greg Valentine especially was a guilty favorite.

Slam: In your new book, Roger Baker shares his memories of the Gardens ramp that led to the ring.

Calvert: The ramp! Yeah we loved it. It didn’t seem so unusual at the time though and I didn’t realize we were the only ones that had the ramp so it was just a part of the action.

I never really appreciated it until I sat ringside right next to it. It really helped with the drama and excitement. You had the visual factor, with Flair in his robes and champions holding their title belts high. And it made everyone bigger – even Andre, Studd, Mulligan – they would come out and look 20 feet tall on the ramp.

At a McKigney show they walked out right through the fans which made me think, oh they don’t use the ramp? It just seemed like it was made for wrestling. You could also get closer and once I dipped a program in Ivan Koloff’s blood. Look… real blood! 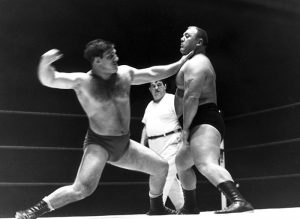 Slam: In chapters like the one on attendance at wrestling shows from that era you went quite in-depth. Which particular chapters of the book did you most enjoy researching?

Calvert: I find the attendance and the ups and downs of the promotion fascinating. The chapter on the TV is another, though it was hard to piece together.

And Frank and Jack Corcoran and John Tunney, all of that early story is the real foundation of the promotion. So, to tell that side was important from the history aspect.

And to give proper due to all of the important “inner circle” members – Phil Lawson, Phil Lisner, Frank Ayerst – and others who may not be as well known on the wrestling side. The Bulldog Brower chapter also, every time I visited with Roger we ended up talking about Brower. He was fascinating and scary, especially if you only know him from his later days. You could fill a whole book on the Bulldog.

The NWA title chapter also was fun and putting together the title defenses list, as it was a very important part of the history here.

Slam: Compared to other territories of that era, there isn’t much footage around of wrestling from the ’40s, ’50s and ’60s in Toronto.

Calvert: Some stuff has started showing up. A kinescope print from 1957 featuring most of a Maple Leaf Gardens card was converted by a very generous fan. And there’s some other spot stuff. 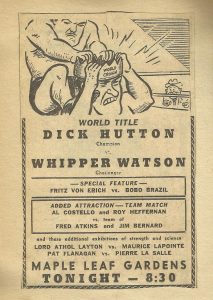 A newspaper advertisement from a January 16, 1958 card at Maple Leaf Gardens.

I have watched some 16mm footage from the ’60s and as the years go by more will surface as collections are handed down, or discovered. The cost of film was very prohibitive so they re-used it in those days, maybe the best bet is the kinescope reels as they would send those out to other cities so they may have survived. The main thing is that it gets shared and not kept in someone’s basement or only shared with private groups.

Slam: Much of the information presented in your book – photos, reports, interviews, memorabilia – comes from MapleLeafWrestling.com, a site your started back in 2003.

Calvert: It has grown over the years from a nostalgia fan type site into more of a look at the entire history.

All of the info that I have compiled over the years, somewhere around 15,000 files, was edited and formed into the pieces in the book. Some were expanded and a few short ones like the Whipper’s Beverages and George Richards were adapted.

The history is so expansive it was tough to narrow it down. I originally started with about 150 chapters. There are lots more that may make it into a next book.

Slam: Why did you decide to self-publish, when From Nanjo to The Sheik, Tales from Toronto Wrestling would have been right in the wheelhouse of a publisher like ECW Press?

Calvert: That’s a great question and one I took a while to figure out. Even before I did the Canadian Heavyweight Title book I had spoken to a few publishers, including ECW, as well as some experienced authors to decide what direction to take.

I have always been an indy-type guy – self-employed most of my working career – anyway, so to keep it representative of what the site is, I decided to self publish again.

And while you will most definitely sell more copies with a publishing house, you also have to give up editorial and content decisions, cover design, and so on.

I had so much fun doing the Canadian Heavyweight Title book with Dick, it was a very easy and fulfilling process. This is really a labor of love so it has to be fun, and I’m not getting any younger so the legacy of the site, along with any books or side projects has to be true. 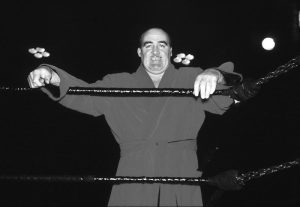 Slam: Lastly, if you could travel back in time to this era in Toronto wrestling, who would you most want to see wrestle at Maple Leaf Gardens?

Calvert: Oh so many, all of them! Kiniski would be at the top. I saw him later so to see him in his angry stomping prime when the fans wanted to just kill him…

And Fritz Von Erich, Pat O’Connor, Dick Hutton stand out. They all had notable impacts on our wrestling history, and Hutton especially is an interesting story. Also Yukon Eric, Lou Thesz, Buddy Rogers. Of course, Whipper Billy Watson, to go back and see him in his high-flying prime of the 1940s before the injuries slowed him down.

To sit and talk with Frank Tunney for a couple of hours would be on a wish list, especially to be in his office in 1956 or ’57! Pat Flanagan and Fred Atkins too, both in the ring and for their insight into the office and the sport in general. Fred went from Londos to Hogan and wore so many hats in the promotion. As long as you didn’t have to do his workouts!

EDITOR’S NOTE: SlamWrestling.net will also have a review of From Nanjo to The Sheik: Tales from Toronto Wrestling coming soon!