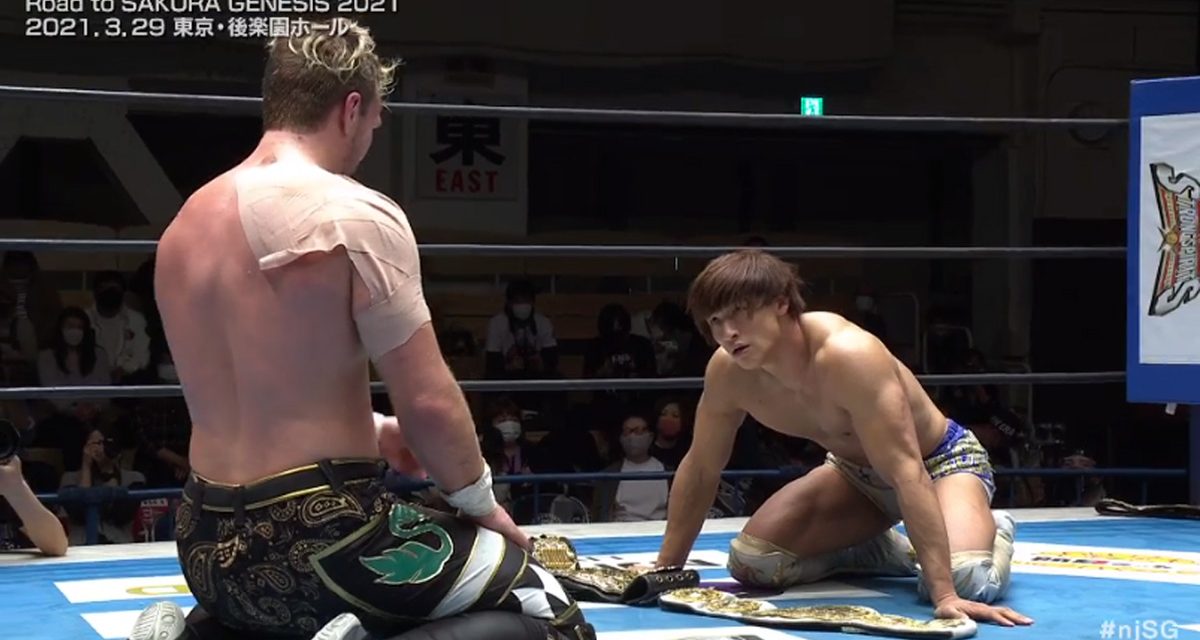 In a preview of their title match coming up at Sakura Genesis on April 4th, IWGP World Heavyweight Champion Kota Ibushi met Will Ospreay in the main event of Road to Sakura Genesis. Ibushi and his partners Tomoaki Honma and Yuji Nagata took on the United Empire (Ospreay, The Great-O-Khan and Jeff Cobb) on night one.

Ibushi and Ospreay started out for their teams. Ibushi frustrated Ospreay with his mat wrestling to the point that Ospreay just hauled off and slapped Ibushi in the face. Opreay escaped Ibushi’s wrath by quickly tagging in The Great-O-Khan. Ibushi ducked out as well tagging in Nagata matching powerhouse for powerhouse.

Nagata blocked Khan’s Mongolian Chops battering him with his signature kicks driving Khan into the ropes. Cobb held onto Nagata from the apron. Khan charged kicking a defenceless Nagata in the face. Everyone brawled on the floor with Ospreay slamming Ibushi into the ringside barricade. 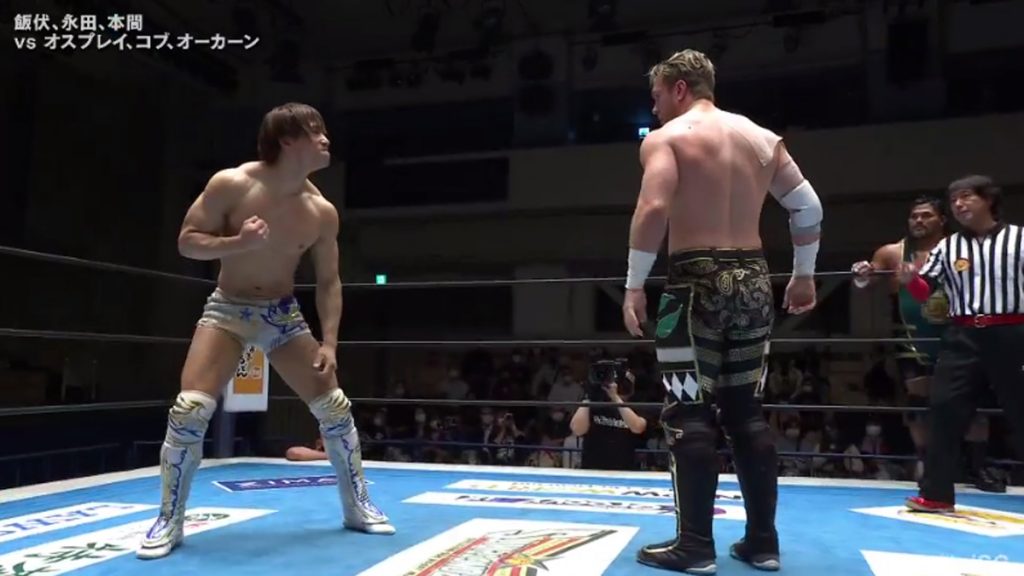 Ibushi is ready to serve a knuckle sandwich to Ospreay. Courtesy: NJPW.

“You don’t know me any more!” shouted Ospreay in Ibushi’s face claiming that he isn’t the same Will Ospreay the champion once knew.

The United Empire took turns pummeling and pounding on Nagata until Ibushi came into save him by kicking Ospreay in the back. Nagata stood toe-to-toe with Cobb. He survived a running powerslam into a corner to tag in Ibushi. It is interesting to note that Tomoaki Honma has yet to tag into the match or be involved in any capacity.

Ibushi’s kicks have Cobb reeling especially a running kick off the ropes. Cobb catches Ibushi in the air slamming him to the canvass. With Ibushi down, Ospreay tags in. Ospreay doesn’t try anything fancy. He just beats Ibushi down to the mat with forearm smash after forearm smash until Red Shoes has to step in and warn him. Ibushi stands up, smiles. Ospreay and Ibushi trade forearm smashes in the middle of the ring. Ibushi loses that battle as he slumps to the mat.

Honma is finally tagged into the match. Honma thwarts a double-team from Khan and Ospreay by double DDTing them. Cobb slams and holds Ibushi in a corner. Ospreay pins Honma with a Hidden Blade and Storm Breaker.

Ospreay points down at Honma while looking Ibushi in the eye. Red Shoes lays the IWGP World Heavyweight Championship belt between them. The two have a stare-down. When Ibushi stands up to get in Ospreay’s face, Cobb and Khan step in front of him protecting their leader.

“You guys don’t like me anymore do you? I am not the boy you remember. I have changed because of all of you people. You made me into this monster,” said Ospreay to the Korakuen Hall audience.

An elementary match of Young Lions versus NJPW veterans. Sanada gets the pin with his bridging suplex on Uemura. Naito isn’t done with Tsuji though. He puts him in a Boston Crab on the floor and refuses to let him go. 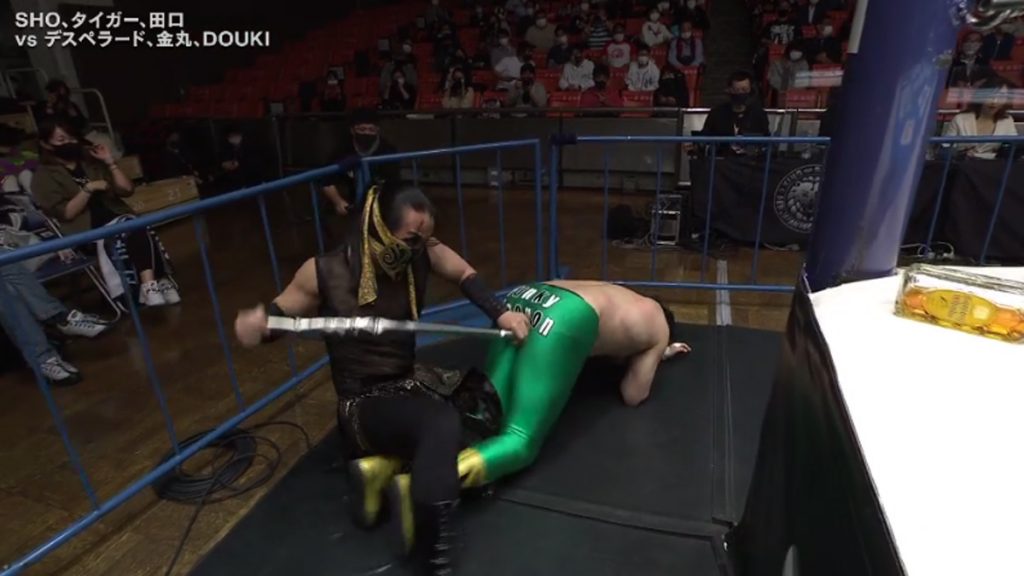 Douki gets to the bottom of Taguchi’s troubles. Courtesy NJPW.

Taguchi holds his own against Suzuki-gun quite well but soon the numbers overwhelm him. Douki picks up Taguchi on the floor and gives him an atomic drop of sorts on the steel post. Ouch! The devious Douki then takes his steel pipe and well, “pokes” Taguchi in his “Funky Weapon”. Ouch! Desperado makes Tiger Mask tap to Numero Dos.

Bullet Club gets the early advantage by jumping Chaos before the bell. Okada fights his way out of a triple team and DDTs Fale. Yano goes for his rope break routine but Togo is standing on the floor and he chokes Yano with a towel. Kenta takes Yoshi-Hashi’s bo staff and clobbers Yoshi and any other Chaos member who gets in his way. Ishimori pins Goto with his Bloody Cross finisher. Kenta walks off with Yoshi’s bo staff.

Not a very long or intricate match. White kicks out of Kojima’s Lariat and puts him away with a Blade Runner. White and Tanahashi talk some trash before heading back to the locker room.

Winners: The United Empire (Great-O-Khan, Jeff Cobb and Will Ospreay)