Yukon Eric was a colorful, yet tragic, wrestling legend 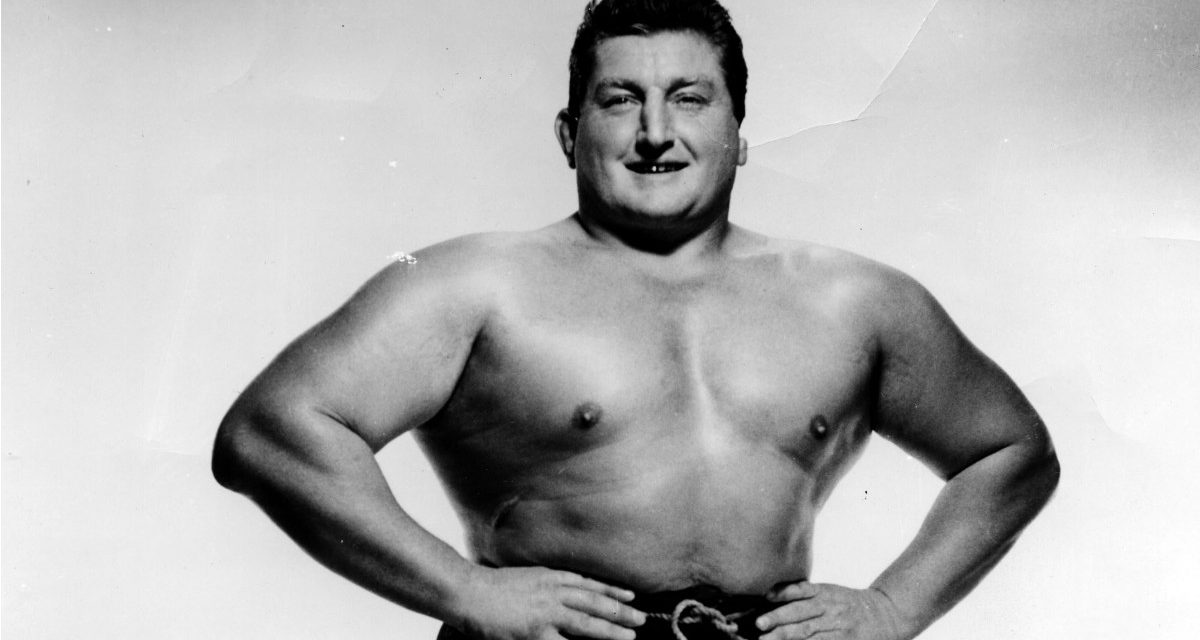 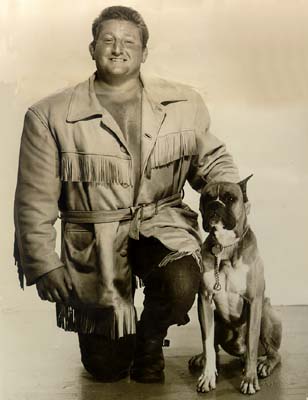 Yukon Eric was one of wrestling’s most colorful personalities ever.

His is also one of wrestling’s saddest stories.

Yukon Eric is probably best known as the wrestler who lost part of his ear during a 1952 match to Wladek ‘Killer’ Kowalski. But there was much more to his career than that one match.

In bare feet and blue jeans, ‘Yuke’ was an incredibly powerful man with a massive 66 inch chest. His strongman talent led to finishing holds like the Kodiak Krunch — a backbreaker on the shoulder, or a bearhug. For effect, he would whip his opponent into the ropes so that they would bounce back into his huge chest. Yukon used a clothesline for a belt, and always wore plaid wool shirts, worn open to show off his chest.

Yukon Eric wrestled all the big names, all around the world. In southern Ontario, he was a regular, teaming with Whipper Billy Watson. His January 14, 1953 match against Killer Kowalski at the Montreal Forum (not the ear match) was the first ever televised wrestling show in Canada.

Primarily a babyface throughout his career, Eric was a quiet, gentle, generous man outside the ring. He didn’t drink, smoke or chase women. When you talk to fans of his, they will always tell you about his convertible, which he drove everywhere — including Buffalo in the winter! 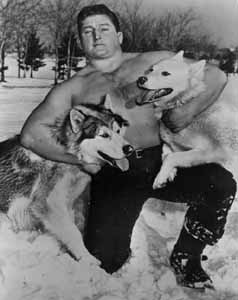 Yukon Eric grew up near Seattle, Washington with three sisters. He attended the University of Washington and played football. (A call to UW revealed nothing about his time there. In short, he wasn’t a standout player.)

During the his heyday in the 1950s, he lived in a trailer in Ridgeway, Ontario. Joseph Lazar, who owned the Maroon Grill in downtown Buffalo, was Eric’s business manager, mentor and friend. His family adopted Eric, and Yuke was in many family affairs. Lazar’s son, Spencer Lazar, contacted SLAM! Wrestling, and shared these delightful memories of what he remembers of Yukon Eric:

This is a true story, In 1950 my father who was a saloon keeper had taken me to the wrestling matches. Eric was a spectator that night and climbed into the ring to challenge one of the wrestlers. He was promptly thrown out of the war memorial stadium. The next day my father who looking out the window of the saloon saw Eric walk by and invited him in for a drink. Eric didn’t drink or smoke, but did accept a glass of milk. This incident grew into fiction in early wrestling magazines that credited him with beating up a saloon full bullies who criticized him for being a milk drinker.

I was with Eric when he bought his first car, a 1960 Pontiac convertible. He had a paper bag filled with crumpled bills and paid for the car with cash. From then on he drove Cadillacs and Lincolns. He was such a bad driver he could not even get insurance. One time going to a match with Ray Dunkle and he lost control of the car and killed a cow! 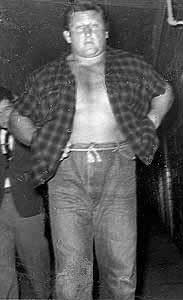 He was very popular and on television every Friday night and my association with him made me very popular. One time the principal of my grammar school called my parents and requested that Eric not drive me to school anymore, because over 600 of the 800 students were tardy from school that morning.

There was a local ice cream shop that had a ice cream sundae with 24 scoops of ice cream and it was free for anyone who could eat it. I casually asked Eric if he would try it, they probably will still talk about that 50 years later.

Another time I remember all of us and several other wrestlers, Sky Hi Lee, Sandor Kovacs went to a restaurant after the matches. Their special was all the lobsters you could eat. The owner was pleased to have these famous people (early TV stars) and asked for autographs. After Eric ate 6 lobsters he was told he would always be an honored guest, but no lobster specials for him anymore. 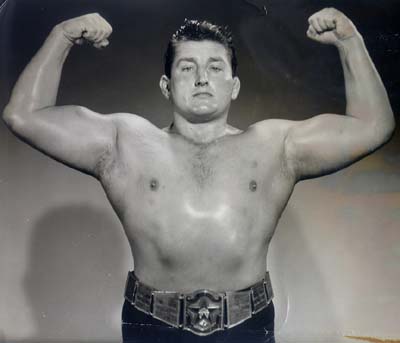 Eric had a boxer dog named Tex and Eric’s trailer was next to a quarry that was filled with water, it was winter time and the quarry was frozen over. Tex had run out over the ice and fell through. Eric then jump through the hole in the ice to try to save the dogs life. Eric nearly drowned and was rescued by the fire department. Eric cried for weeks over the death of Tex.

I remember many times when I was a kid, I would put an arm lock on him while he was sitting in a chair and the patients he would show by pretending he was wrestling me. I knew once I got that arm lock on him, he would always give up. I can still hear him say, “I give, I give”. I grew up wanting to be a professional wrestler but I was never going to grow big enough.

As a small kid I was asking Eric for things that an 8 year old would foolishly ask for. I had mentioned the boat and motor for my dad. I’m Jewish and belonged to a cub scout pack at our temple. They were having a father and son dinner. Unbeknownst to my dad I asked Eric to come with some wrestling friends. He asked me who he should bring and I thought for a minute and then suggested Farmer Don Marlin. The dinner was held about a month late, I had forgotten that I even asked Eric. Well he didn’t forget and during the dinner Eric and Farmer Don showed up, and Farmer Don brought along a little pig! (He always had a pig running around the ring.) You should have seen the Rabbi’s face with a pig in his temple. The ultimate taboo. (Our father and son dinner was strictly kosher).

Nobody really seemed to care, not even the Rabbi, because this dinner was now really a big event with Yukon Eric & Farmer Don Marlin in attendance. That night 100 cubs scouts went home with one of their happiest experience.

Eric was a loner and a introvert, he didn’t have family in the Buffalo area and I don’t know how and why he ended up in Buffalo. When he wasn’t wrestling he spent his time at his camp site, just fishing for blue gills and swimming in the quarry. Later in his career he did hang out with another wrestler named Ray Dunkle. I remember one Thanksgiving dinner where he and Ray ate a 20 lb. turkey in one sitting!

The Yukon Eric story comes to a tragic end in 1965. 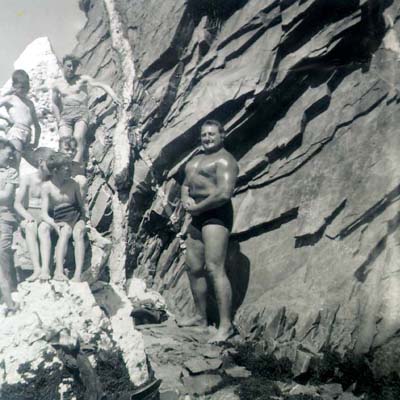 He had married a wrestling fan, and they had two children. While Yukon was on the road, she sold their house, cleaned him out of all his assets and took the children to an undisclosed location. Eric was devastated, and a short time later drove into a church parking lot (believed to be in Atlanta), and committed suicide with a gun in January 1965.

He left behind three children — two daughters and a son.

Thanks to Erik Holmback (son of Yukon Eric) for the use of some of the family photos.

When I was a child growing up in Owen Sound, Ontario I went regularly to the matches at the old arena. One fall day I was walking down the main street and saw Yukon going into a store wearing only his lumberman shirt — no jacket. It was a typical fall day up north — cold and crisp. Also he drove his car down the street with the top down!!!!
Joel Cadesky

I first remember seeing Yukon Eric in 1958 while living near Indianapolis, Indiana. He was a real hero to this 11 year old kid. My father took me to see Yukon Eric and Bobby Managoff team against Dick the Bruiser and Angelo Poffo. Later Yukon Eric would team with the Bruiser in trying to rid the area against the Shire Brothers. It is sad to hear of his early demise.
Michael Copper

Thank-you for your Yukon Eric page, a kind tribute.
I met Yukon Eric in Daytona Beach, Florida in 1964.
It was a dismal winter day. I was strolling northward on the beachside Broadwalk.
As a large figure approached from the opposite direction, I realized immediately who he was. The ear was confirmation.
I’d seen him wrestle many times on television, though never in-person.
He seemed pleased at being recognized. He showed no false bravado. We small-talked for a few minutes, no more than three.
I came away from this chance-meeting thinking how odd, this kind, gentle man being involved in such a brutal sport.
Although he seemed melancholy that day, nothing prepared me for a tabloid’s front-page a month or two later. The news of his self-imposed death in Georgia. I didn’t buy that paper, nor did I read the article. The tragedy I know helped me grow up a little, I was 18 at the time.
R.I.P., Yukon Eric.

To this day Eric is the strongest wrestler I’ve seen, and that includes Bruno Sammartino. My collection of wrestling magazines contains many articles on him.
Barbara Forsythe

I always thought that Yukon Eric was the world’s strongest wrestler until he was matched against Canadian Doug Hepburn in Niagara Falls on Nov.7,1955 and again on Nov.8 in Hamilton. Both men were equal in weight, 285 pounds, and chest size. Yukon was famous for submitting his opponents with his mighty bear hug and Hepburn was defeating his opponents with an upside-down bear hug, claiming he was the world’s strongest man.
In their first match they wrestled to a draw, but in Hamilton Hepburn surprised Eric by lifting him in the air using his upside-down bear hug and defeated him before a packed house. Hepburn was tough on Eric throughout their match, battering him wi;th his chest and breaking Eric’s holds with his powerful arms. Hepburn was a tough nut for Eric to crack and he became frustrated at Hepburn’s strength and chest butts in the corner. Eric began slugging awy at Hepburn and thats when Hepburn applied his bear hug and beat him.
I always wondered if they ever had a rematch after that!
Ed