On the evening of November 27th, 1999, the Hardcore Wrestling Federation crowned new tag team champions when the Ebony X-Press, which combines the talents of J.Q. Publik and Reggie Marley, defeated “Legit Heat” — Jack Damage and “Dangerous” Danny Steele — at the Chinese Cultural Centre in London, Ontario.

In the hours prior to the title change, the X-press sat down with SLAM! Wrestling for an interview. J. Q. Publik is really the 223-pound Germain Wilson of Toronto, while Reggie Marley is 218-pounder Curtis McKellar of Burlington. Both have been wrestling just over a year and a half, having both started at approximately the same time in May 1998. 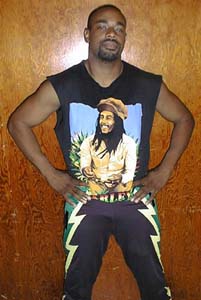 “I’ve liked wrestling since I was ten years old,” Wilson explains. “I remember, a friend of mine at school came up to me and he said ‘Can I give you a piledriver?’ and I said ‘What’s a piledriver?’ So he picked me up, turned me upside down and dropped me on my head, and I was a little bit dizzy, because he was a kid and he didn’t know what he was doing, but ever since that moment, I got interested in it, and I wanted to find out more about it. I started watching it and I’ve wanted to do it since then.”

McKellar’s interest in pro wrestling came from a much less painful initiation into the mat sport. “I’ve always been interested in wrestling since I can remember, since I was born. My Dad and my uncles, we always watched it. Then about 1990, when the WWF started going… with like Doink the Clown and that hockey gimmick or whatever that was (The Goon), I stopped watching it for a while, didn’t really like it. Then I saw WCW for the first time, they got back to wrestling, and it just interested me. They were having a good time out there and I said ‘I need something to do. Why not?’ ”

The formation of the Ebony X-press began when the pair were together in Renegade Wrestling Alliance’s training camp. The two had known each other socially throughout the camp. “People had been saying ‘Reggie, you should team up with J.Q., J.Q., you should team up with Reggie’,” Wilson remembers, “and we went singles for a little while and then decided, I guess, it was time to put the Ebony X-press together.”

When asked for some of their favourite tag teams, McKellar says “Harlem Heat, they’re heroes in my neighbourhood. I loved Benoit and Malenko when they teamed up, guys like that.”

“I liked the Hollywood Blondes. I thought they were a really great team.” Wilson says. “The Hart Foundation, the classic Hart Foundation (of Bret Hart and Jim Neidhart) were a great team for me, too.”

While the Ebony X-press may like watching those teams, the team itself is an original.

“We never sat and talked, to say we’re going to pattern ourselves after (any particular team), ” McKellar says. “Individually, we might take something from this guy or another guy but we haven’t said “Hey, let’s be like them’.”

Besides learning from the instructors at the training camp, the Ebony X-press also worked with Glamour Boy Shane Sewell. In addition, Wilson also admits that they have learned a thing or two from “watching TV, trying out new stuff.”

The training that the two received with Sewell and the RWA quickly dispelled any fantasies that becoming a wrestler would be easy. “The first time I thought I got into the training centre, got into the ring, I thought it would be easy running around and taking bumps, but it’s really, really difficult. It takes a lot of cardio-vascular.” Wilson admits. “It takes a lot of skill, legitimate skill and endurance to be able to be a wrestler. And I found there was a lot more to learn than I had ever expected. Just intricacies, little things about how to do all the moves that I just hadn’t thought of.”

Wilson agrees with his tag team partner. “That’s a really good point, because I’m from Toronto and I don’t drive, so I would take the GO Train in from Toronto into Burlington, and then take the bus and then go for a walk, and in the winter it’d be a little cold, but it’s what I love doing and I wanted to get into it, so I just did it.”

But the hard work and sacrifice in training paid off, as both are now accomplished wrestlers.

In addition to the Hardcore Wrestling Federation and the RWA, both members of the X-press have wrestled for Championship Wrestling International, and Continental Championship Wrestling. Wilson has also worked a couple of shows for the now-defunct World Wrestling Superstars (including the organization’s first show, which featured Jake “the Snake” Roberts and King Kong Bundy).

“I have to admit, I had tried to stay away from tag teams as much as possible, because I thought that it would be easier to do singles wrestling,” Wilson now says. “Getting a tag team was a lot more fun. [There are] a lot more factors, more people involved. I really enjoyed the first time, it was a lot of fun.”

The two debuted as a team on January 17, 1999 during a match at Appleby Mall in Burlington, Ontario. Their opponents were “Sexy Baby” Jamie Jackson and The Custom Made Man of The Hollywood Hunks, or as they jokingly call them “The Hollywood Punks”. “It was fun.” McKellar says.

(Ironically, Ebony X-press would defeat Jackson and Custom in the first title defence of their newly-won HWF tag team titles in St. Thomas, Ontario on November 28, 1999.)

“A lot of bookers like the idea (of the Ebony X-press). I guess because the two of us are flamboyant characters and people like to see us,” Wilson says. “We don’t want to be arrogant or anything but the fans…I love the fans, wherever we are, they like us.” 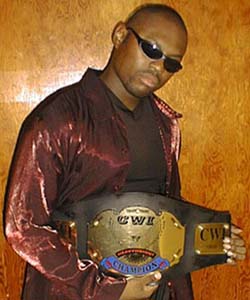 Both are happy at the fame they’ve achieved thus far in their careers. “Everybody’s looking for us,” McKellar says to which Wilson adds “It’s true, everybody knows about the X-press.”

The Ebony X-press has been together just under a year as of the interview. When asked for a highlight of the year, McKellar replies that “you can’t name just one, there’s a couple, really. After the first time we teamed up, January 17th, that was the last time I wrestled until May. So coming back, that first show (a Continental Championship Wrestling card) after that layoff, that was a great time. Missy (Hyatt) was there, and Kimona, they’re good to look at! (laughs) You can quote me on that.”

Another highlight would be “the first Hardcore show I did, I had a great time there, up in Parkhill. For me that was real fun. And the second Hardcore show (July’s Rage in The Cage), with 800 people. In the cage, that was a thrill for me.”

Wilson echoes his partner’s sentiments over appearing at the Rage in The Cage show. “Yeah, the Cage was a really good one, because it was my first time ever being inside a cage and it was a good match against “Dangerous” Danny Steele and Mr. Tommy Twilight.”

For another highlight, Wilson would also point out his winning the Championship Wrestling International World title. Wilson won the title by eliminating The Orderly in a 20-man Over the Top Royal Rumble. Wilson describes the Orderly as “an ugly green medical guy with a mask”, who defeated Wilson two months (and several successful title defences later) by hitting him over the head with a chair, and giving him a concussion. “My first concussion,” Wilson adds. “And my only concussion, I hope.”

With a year of teaming as the Ebony X-press under their (championship) belts, McKellar says that “the sky’s the limit.” McKellar says that he isn’t sure what the future might hold for the team but “wherever we can take it, it’ll go.”

Neither Wilson or McKellar are naive enough not to be thinking about the seemingly inevitable end to every tag team, the split.

“Tagging up together is a real good experience for the two of us,” Wilson adds. “but if one of us takes off and the other one doesn’t, that’s something we have to deal with. But, hopefully, you know, take all the tag titles we can along the way.”