WWF Rebellion vid worth the wait 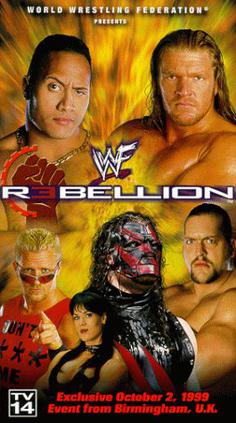 On October 2, 1999, while us poor North American jabronis were planning what we were going to do for Halloween, the WWF was in England putting on a potent pay-per-view called Rebellion. We saw bits and pieces of it on Raw Is War (the Bulldog’s attack on Stephanie, Jeff Jarrett’s confrontation with Chyna), that’s about it. Finally, courtesy of WWF Home Video and Koch International here in Canada, we can watch the event in its entirety. Better late than never, I say.

An exciting card from top to bottom, WWF Rebellion from the National Indoor Arena in Birmingham, was accented by The Rock and Triple H (the champ at the time) duking it out in a steel cage match for the WWF World Heavyweight Title. The Rock and Triple H go at it tooth and nail. Even though that crappy thick-barred, Hogan-Bundy steel cage is in use, there’s blood (Hunter’s), steel chairs and Vince McMahon uttering a VERY naughty word right on camera. It’s a fun, crazy brawl.

The main event is supported by a exceptional undercard. The Road Dogg, in probably his best match ever, takes on Chris Jericho. The cagey Jeff Jarrett locks up with the human-dynamo D’Lo Brown with Jarrett’s Intercontinental Title at stake. A fast-paced tag team war has Edge and Christian, The Hollys and The Acolytes socking it to each other. The Four Way Woman’s Championship match (Ivory versus Tori versus Jacqueline versus Luna) ain’t that bad either. Who woulda thunk it?

So, if you’re between pay-per-views and looking for something to tide you over pick up WWF Rebellion, sit back and take in three hours of action from across the pond.