The amazing thing when going through the photographic works of Roger Baker is that he never took up the profession as a full-time gig. With some of his boxing photos on display at an upcoming sports film festival in Toronto, it’s worth considering how the hard work as a butcher and fishmonger paid off.

Baker was a Toronto-based writer and photographer for magazines like The Wrestler, Inside Wrestling, Wrestling Revue, and Boxing Illustrated from 1958 to 1973. Real life took him away from his love of the action, raising two children with his wife Gloria. About a decade ago, Baker took his old negatives and photos to a friend to be scanned digitally. In a roundabout way, that lead to him contacting this writer and contributing both stories and photos to SLAM! Wrestling. 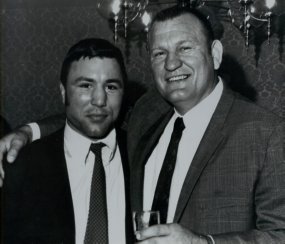 The marriage of boxing and wrestling — George Chuvalo and Gene Kiniski, as shot by Roger Baker.

Knowing quite a bit about his days shooting professional wrestling, from Buffalo (where he was born) to Hamilton and Toronto, I set out to learn more about Baker’s days as a boxing photographer, before some of his images are on display at the Indy Sportz Film Fest Experience (ISFFE) April 24-25th, in Toronto.

The Roger Baker Exhibition consists of 10 boxing and wrestling photos: six boxing shots from the 1960s, including two shots from Muhammad Ali against George Chuvalo; and two photos of Lou Thesz versus Argentina Rocca.

Long-retired from his days as a kosher butcher and running a fish shop at Bathurst and Eglinton, the 79-year-old Baker considered the honour of having his works on display at ISFEE.

“I don’t have the adrenaline rush that I would have had 30 or 40 years ago. Then, I was all keyed up,” Baker said. “They’re all from Maple Leaf Gardens. I used to shoot in the smaller halls, boxing shows they had, little local promoters that put them on, but the big shows were always at the Gardens.”

As great as it was shooting all the pro wrestling through the years, his biggest moment as a photographer was the cover of Boxing Illustrated, following the March 29, 1966 bout between Muhammad Ali and George Chuvalo.

“I remember the nicest compliment I ever got was from the editor of Boxing Illustrated and Wrestling, and a few magazines, Lew Eskin. He said to me when he put the picture on the cover of Boxing Illustrated, he said, ‘Rog, you finally made it. You’re right up there with the pros now.’ He published some of my pictures that were in the smaller boxing venues, one or two. He had so many contributors and boxing is worldwide. They do a story and they might only use one or two pictures because they’ve got so many other competing pages that have to cover different parts of the continent, around the world.”

At Maple Leaf Gardens, Baker would photograph the major fights for Chuvalo, the local pugilist who made it big time, including his weigh-ins and fights with Ernie Terrell, Bill Nielsen, and, of course, Ali. 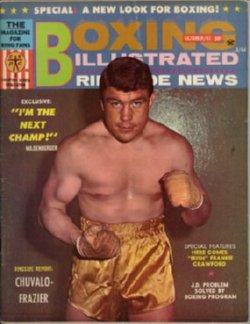 “I just loved to be around that type of atmosphere,” said Baker. “I was always invited to whatever the boxing interests had in Toronto. They were very cognizant of who took an interest in the sport and who was in the media, so they were always inviting me to this or that. It was flattering. I remember one time I got invited to Chuvalo’s for a grand opening for a restaurant he had downtown — I think it was around Queen and Bathurst St. — many years ago; probably it was just a front-man, somebody put up all the money.”

Chuvalo and Baker still see each other on occasion — and a documentary on Chuvalo’s life will be screened at ISFFE as well.

“I covered Chuvalo when he was training to fight Floyd Patterson many years back in Madison Square Garden,” reminisced Baker. Chuvalo’s manager was Irving Ungerman, who also had another fighter, Clyde Gray, that went on to become the Ontario Athletic Commissioner. 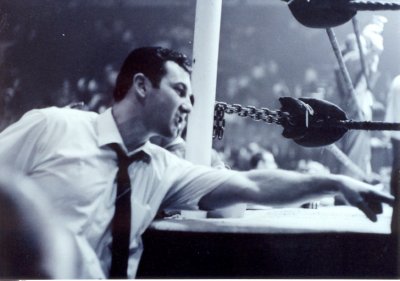 Roger Baker at ringside for a boxing fight at Maple Leaf Gardens, circa 1967-68.

It’s important to keep in mind that photography was a sideline, a second job.

“Between boxing and wrestling, I was always champing at the bit. I remember I used to work, when I was a butcher, one time, the guy I worked for, it was a Thursday night. He always dragged his ass around, ignoring me, and I wanted to go home. I wanted to clean up, we were finished. I wanted to go to Hamilton,” recalled Baker. “He says, ‘What’s the matter with you? You got ants in your pants?’ He got under my skin and I remember that I leveled at him. I said, ‘You know, for what you’re paying me, I’ve got to make money somewhere else too.’ I was beating up on the guy in a way, because of the way his attitude was toward me. ‘Oh, okay, I understand.’ I had to jump in my car and barrel down the highway to get to Hamilton. In those days, I tried to get pictures of the wrestlers from two or three different locations and matches, plus the story and that to go on with it, to make it interesting.”

Baker did a handful of boxing stories too, like one on Bob “Pretty Boy” Felstein from October 1967, but in wrestling, he did numerous profiles and features, including a memorable trip to visit with Ron Dupree and Chris Colt — the Hell’s Angels tag team — on Omaha, Neb. 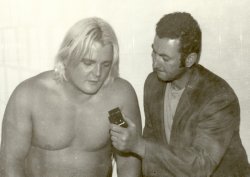 “There weren’t that many fighters around. In the days when the Tunneys had wrestling, you know how it went with the territories, you might employ a roster of 20 or 30 guys, and they’re staying around here for at least six months, and some of them a year, depending on how well they are doing. They’d have apartments here and their families, so I could have access. I would make arrangements with the wrestler to visit him, we’d go on the road together. But of course it’s all different now; they just work their spots, and keep moving every night to a different territory.”

Before he became a pro photographer, Baker was just a regular fan at pro wrestling shows.

“I was always the guy at ringside or as close as I could get that would run over to the ring to try to snap a picture. I did that for maybe a year and a half, and then one day I just figured, ‘You know what? I should be doing this and making some money.” Confident in his ability, Baker sought out the okay to work ringside.

“I got permission from the Tunneys. I went to visit them and they said, ‘As long as you show us your work, we’ll let you come in and work ringside.’ That’s how it evolved for me in a couple of words.”

A definite highlight was being at the Gardens when The Sheik made his debut. Seeing the photographer at ringside, The Sheik chased him for a good five minutes before returning for the ring for his first round of mayhem … that would last at MLG until 1974.

Good and warmed up with the memory bank, Baker detailed what it was like to shoot both photos and 8 mm film at wrestling.

“Back in the day when I was shooting, you’d go into the arenas, and the light they had was quite stingy. Unless you got the wrestlers right under the light, under the strong rays of the light, you might have part of them perfectly exposed and the rest of them were too dark. That’s why I had to use a strobe all the time,” he said. “A lot of time I shot available light, like at the Gardens, and it’s a different perspective altogether. I preferred available light pictures. But then sometimes you’re sorry you did it, because it’s not enough to really make the picture sharp. You’ve got to be so precise with your focusing. You can get some pictures that are just a little bit out of focus. It makes such a difference to have a picture that’s razor-sharp, which you’ll get with a strobe if you’re dead-on with your focusing.”

One was the film camera, with a turret lens, which had a pistol grip and weighed about 10 pounds all told. “It was battery-operated, and I could switch from normal to wide angle to telephoto by spinning the turret to the window where the film passed through, the shutter and everything. That was before I started taking actual pictures for magazines.” 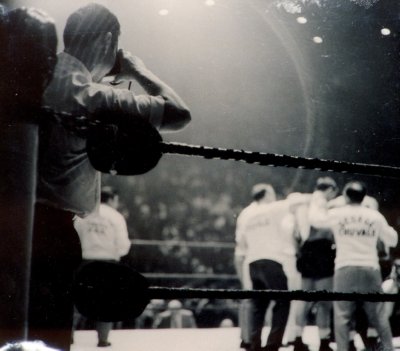 Roger Baker in the corner during the introductions for a George Chuvalo fight at Maple Leaf Gardens.

He filmed a few wrestling matches, without sound, including Whipper Billy Watson against “Nature Boy” Buddy Rogers; clips of Rogers vs. Watson will be screened at Indy Sportz Film Fest Experience (see sidebar).

For ringside, it was a dual proposition, with his trusty old Miroflex paired with a Pentax 135mm camera — plus “a big, heavy power pack with a strobe.”

He described the work: “Constantly checking everything, that it’s working right, you’re focused right, you’re using the lens you want to use — constantly going, going, going, checking everything. You’re never taking anything for granted. Then if you shot a roll of 12 pictures with the Miroflex, if I could come up with one or two out of the 12 that were really good, well, according to [publisher] Stan Weston, he said, ‘You’re doing great. You’re doing better than most other photographers.’ Then sometimes you get lucky, you get a real good closeup and you’re dead-on, and you knock off five or six or 10 pictures, hand-cranking your camera, and you come up with one that’s absolutely spectacular. That was always the game, to try to get as close as possible, and get as much expression on the wrestlers’ faces, try to get those blood shots, because that’s what sold the magazines back in the days that I was at it.”

Inevitably, Baker changed with the technology.

“I wish I still had that old movie camera that I was talking about. It would make a nice memento, but I got rid of it many, many years ago. I adapted to digital. It takes all the guess work out of taking a picture.”

EDITOR’S NOTE: Through the years, Roger Baker has written a number of stories for SLAM! Wrestling, allowed us to reprint some old articles from Wrestling Revue magazine, and shared his amazing photography.

Greg Oliver is proud to call Roger Baker a friend, and is blessed to think back to that first contact — it felt like Roger had been hiding under a rock for years with a wealth of photos of memories just waiting to be shared. Greg can be emailed at [email protected], and you can follow him on Twitter @gregmep.