In a recent interview with Sports Illustrated, Phil Brooks (AKA: CM Punk) downplayed the pro wrestling industry as a whole.

“In pro wrestling, it’s fake. People always get offended by that word. ‘No, we like to say it’s pre-determined.’ For whatever reason, people get angry at fake; pre-determined eases the blow? It’s fake. At the end of the day it doesn’t really mean anything. So after a while, it was, ‘Let’s just really fight and see what happens.’ Now I get to,” he told reporter Jon Wertheim.

Brooks also argued what constitutes a top performer in the business. 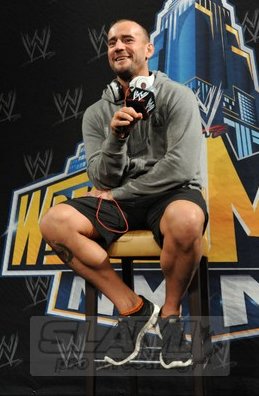 CM Punk at a press conference at WrestleMania 29. Photo by Mike Mastrandrea

“Well, that’s another thing in that phony world. What does it mean to be a good fake wrestler? That’s an identity crisis that I think I struggled with. It doesn’t matter if you’re the best; someone else picks who they want in the top spot,” he said.

Brooks went on to say the real competition for him was all the backstage politics in the WWE.

“Backstage is so shark-infested and political. It’s almost comical. A lot of people are more interested in the backstage goings-on than what they see on television. A lot of ways it’s more fascinating. It’s a competition for sure,” he told Sports Illustrated.

Brooks commented that he didn’t have much say over the angles he was involved with and in the end, “it’s Vince’s company and his say”.

Brooks has said he left pro wrestling behind because of the schedule, the injuries he sustained and the cutthroat backstage politics. In the interview, Brooks also claimed some WWE superstars might be taking out their outside frustrations on their “rivals” inside the ring.

“In [MMA] I know the other guy is going to try and kick me in the ribs as hard as he can. No, not maliciously. But I’ve been in the [wrestling] ring with plenty of guys where I’m wondering, Is he is trying hurt me? Is he mad because he is losing? I don’t have to deal with that bulls— any more. It’s a godsend,” he said.

Signing with the UFC last December, Brooks has been training to compete in a UFC ring. When asked about whether, like when he was wrestling, he was worried about the physical toll the grueling MMA would take on his well-being, Brooks said he wasn’t concerned.

“Not at all. I’ve been beat up before. What it boils down to: what’s the worst thing that’s going to happen to me? I’m going to get beat up? All right. That’s how I look at it,” he said.

Brooks is currently facing a $1 million lawsuit filed by Christopher M. Amann, the WWE doctor who Brooks claimed misdiagnosed his staph infection and mistreated his concussion.