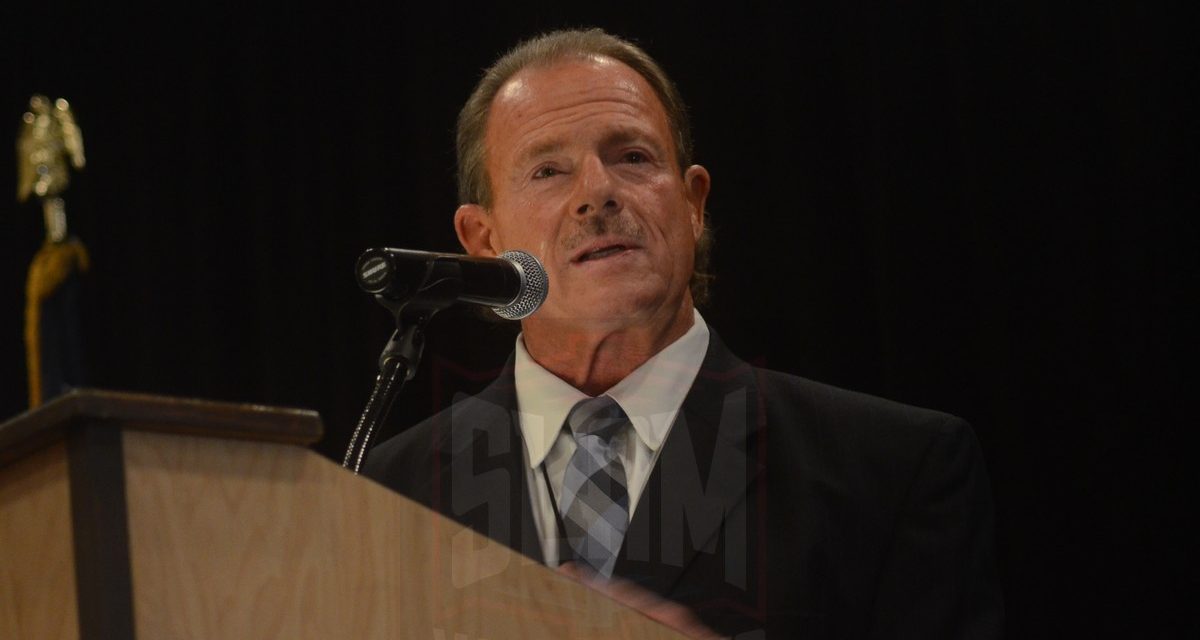 Traditionally, the first of two nights of awards at the annual Cauliflower Alley Club reunion has been dubbed the Baloney Blowout in honor of the bread and sandwich meat that wrestlers downed on long trips on the road.

But as the club’s 50th anniversary celebration swing into an emotional high gear, President Brian Blair announced April 14 that the get-together will be renamed in honor of former AWA world champion Nick Bockwinkel.

A second-generation star, Bockwinkel became president of CAC in 2007; he’d long been a major force in the nonprofit association of wrestlers.

With his health declining, he stepped down in August 2014 in favor of Blair, who said this year’s event probably will be the last that Bockwinkel will attend.

“He is one of the dearest people that I know,” Blair said before Bockwinkel acknowledged the crowd. In tribute, the club auctioned a ring jacket and pants that Bockwinkel wore in his prime as one of wrestling’s most intelligent and shrewd heels.

It fetched $5,000 for the CAC’s Benevolent Fund, which helps wrestlers struggling with health or financial issues.

The salute to Bockwinkel was one of several heart-tugging moments as the club handed out a variety of accolades.

A posthumous award went to Bruiser Brody (Frank Goodish), the celebrated rebel-brawler who was murdered following a July 1988 match in Puerto Rico. Stan Hansen, his close friend and tag team partner, led the audience in a chant of “Brody! Brody! Brody!”

“Bruiser was the really smart one. I could go out and I could do it pillar to post and everything else,” Hansen said. “But Brody was the guy that really understood business. … He had great psychology.”

Also praising Brody was Terry Funk, who said he will never return to Puerto Rico as a personal protest against the way authorities mishandled the investigation into the stabbing death.

“I don’t think that there’s ever been a bigger tragedy than what happened to Bruiser Brody,” Funk said.

Brody’s widow Barbara Goodish said she appreciated the fact that so many people remember her husband’s ring legacy. “He wanted to give people the best night of their life. He wanted people to love that match and say it was real.”

Former WWE and WCW champion Diamond Dallas Page also struggled with his emotions after receiving the Jason Sanderson Humanitarian Award for accomplishments that elevate wrestling outside the ring—in particular, for the lives his DDP Yoga has changed. 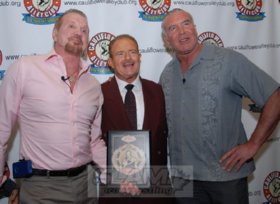 Jake “The Snake” Roberts and Scott Hall were in attendance—they both credit Page for turning around their lives. Hall credited Page with rehabilitating him to the point that he could walk on stage when he was tapped for the WWE Hall of Fame in 2014.

Page said he wants his life-altering program to leave more of a mark than his wrestling career, though he quickly noted that was successful as well. (He will receive a separate wrestling award at the CAC banquet.)

“When you give people back hope, man; it’s so strong,” he said.

Other honors handed out at the Bockwinkel Blowout:

Christopher Daniels’ 22-year career landed him a men’s wrestling award. A tag champ in Ring of Honor with Frankie Kazarian, Daniels has been regarded as one of the great independent wrestlers of the last two decades.

“I hope that I continue to earn your respect every time I walk into a ring,” he said.

Another men’s award went to Sinn Bodhi, otherwise known as the bizarre Kizarny. Roberts introduced Bodhi and strained to describe the first time he saw the strange in-ring brew of fantasy, wrestling and freak show.

“The first time I saw him wrestling I damn near quit doing drugs,” Roberts joked. “I didn’t know what the hell this guy was trying to do out there.” But then he got the act and commended his trainee for finding a niche in the business.

“I’ll let you in on a little secret,” Bodhi said. “I’m not crazy. I just have passion.”

Len Denton rounded out the men’s category. Known as the masked Grappler, Denton starred in several territories, including Mid-South and the Northwest.

Women’s awards went to Malia Hosaka, a Killer Kowalski-trained vet of just about every federation, including six years as the top woman in the Missouri-based World League Wrestling, and Lisa Marie Varon, who was Victoria and Tara in the WWE and TNA.

“Who would have thought the girl who got hired as a Godfather ’ho would end up having the first cage match, hardcore match, street fight match” among WWE women? Varon asked. “I’m still living the dream.”

Jimmy Hart received the Manager’s Award, somewhat unexpectedly, as The Mouth of the South noted he was not dressed to receive a ceremonial plaque.

Another WWE Hall of Fame member, Hart thanked his WWE boss Vince McMahon for bringing a megaphone from Japan and giving it to him as part of his now-famous gimmick.

Wes Brisco received the Future Legend Award and vowed to make it to the top of the wrestling heap. He trained in the WWE developmental system from 2009 to 2011 before his release, subsequently landing in TNA.

“I look to each and every one of you for inspiration,” Brisco said as his dad, Gerald Brisco, a WWE Hall of Famer, watched from a few feet away.

Emotions, for the most part, but a little comic relief never hurts at a CAC event. Funk received the club’s REEL Award for his roles on the silver screen, Paradise Alley, Road House and Over the Top among them.

“I don’t think my acting ability was anything stupendous but hell, somehow I managed to get a part here and there,” the Funker declared.