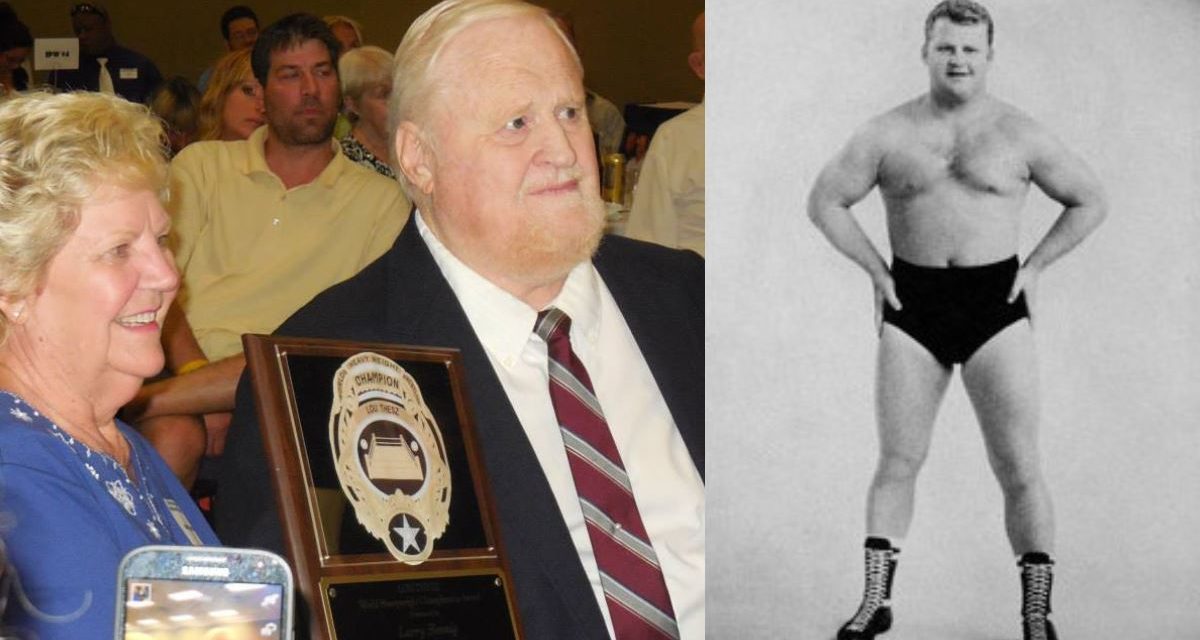 LAS VEGAS – Like the WWF shows of the 1980s, when the World championship was defended before intermission, so the champ could head to another show, Wednesday’s Cauliflower Alley Club banquet put its top name on mid-show, and there was little doubt that Larry “The Ax” Hennig stole the show.

Hennig was presented with the Iron Mike Award, the top honor in all of professional wrestling, named after the CAC’s founder Mike Mazurki. Harley Race, in his mobility scooter, said of Hennig, “There is not a person involved in wrestling that deserves it any more than you do.” 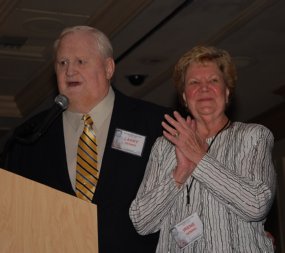 Larry Hennig and his wife, Irene. Photo by Brad McFarlin

The Ax was a hoot, teasing Race about his driving, telling Dick Beyer to stop wearing The Destroyer mask, how Bobby Heenan had an all-black dog that he called Spot, and how he was called Killer because “I killed the territory.” (“What about your opponent?” quipped Race from the crowd.)

The Gold Coast Hotel and Casino in Las Vegas hosted a record crowd of 756 at the banquet which celebrated the 50th year of the Cauliflower Alley Club. “This place is sold out, and I haven’t sold a place out since 1985,” said Hennig.

He was also extremely thankful. “I didn’t do this myself,” Hennig said, calling his wife Irene up to the stage. But he couldn’t hold in another barb: “We’re going to do this today, are we?” chuckled Larry as his wife slowly winded her way up. The Hennigs are a big family, and Larry said he had so hard a time keeping track of his grandkids that he has numbered them.

“I am so proud of my husband and my whole family,” said Irene. “Who ever thought we’d get this far?”

When asked how much more there was still go to in his speech, Hennig pushed away co-emcee JJ Dillon.

“I’m the star of the show and it ain’t no bullshit,” he declared, and a “Larry! Larry!” chant broke out from the crowd.

He then wanted to sing, his wife Irene calling for the hook behind his back. With some audience participation, he warbled his way through “Ghost Riders In The Sky.” (“Thank God you learned how to wrestle,” cried out Race.)

When Hennig was finally done his virtual stand-up act — he did thank some people and tell a few wrestling stories — he was presented by an original painting of his late son Curt Hennig by Kansas City artist Rob Schamberger.

“Man, I ain’t topping that,” said Dillon, returning to the regularly-scheduled programming. He then brought up his ace in the hole, co-host Terry Funk, who started singing his own rude song. Funk wanted his own wife on stage, but Vicki Funk turned him down.

The actual finale to the evening was Jerry Brisco getting the Lou Thesz Lifetime Achievement Award.

Jim Ross did the honors of bringing up Brisco, along with Wes Brisco, one of Jerry’s two sons. “He’ll tell me the truth,” said Wes. “He deserves this award more than anyone else.”

This isn’t the first time that Ross has taken to the podium at the CAC, and once again he delivered an entertaining, if not a PG speech. There were drinking jokes, flatulence that leads to vomiting, colonoscopies on the recommendation of Pat Patterson, and his critique of the steak dinner (and it was more than just needing JR’s BBQ sauce).

But it could be boiled down to one thing.

“I love Jerry Brisco,” said Ross, talking about how the rule he learned is that there you are lucky if you have five good friends at the end of your wrestling career. And Brisco is Ross’ closest friend, someone who has his back, someone he’d share a bank PIN with, someone he’d want comforting his wife, Jan, should anything happen to him. 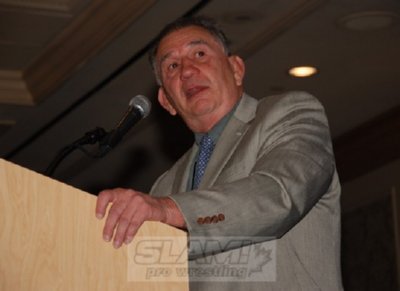 Brisco wanted to sing too, launching into a David Allen Coe song adopted to the wrestling business, a tribute in part to all the driving that wrestlers do and the need to stay entertained. He also cracked some jokes about last year’s Lou Thesz Lifetime Achievement Award winner, Michael Hayes, including Hayes’ wrestling skills and flashy attire.

“I’ve been in every high school gym I think in the United States of America,” said Brisco, who is 68 years of age, and been wrestling amateur since the age of eight. Now a talent scout for WWE, he’s still on the road looking for gems.

“I’ve heard that term a lot tonight, giving back …” began Brisco, starting to cry as he talked about his late brother, Jack, and his son Wes, and their common love for wrestling.

“Jack was a hero to my son, to me, to many people,” he cried, regaining his composure to take a couple of light-hearted shots at new CAC president Brian Blair, and a story about Blair being ribbed and traveling in a trunk of a car, leading to Blair “dropping trou” and the “greatest moon” in history to a bunch of truckers.

He shared stories of breaking into the business, tagging with Thunderbolt Patterson, wrestling in Australia, turning heel, life in the Florida territory, including the long drives—“Never trust a booker; they don’t know their geography at all”—and stressed the importance of brotherhood and friendship of the wrestling business.

“It’s a journey and we’re fortunate to be on it,” ended Brisco.

The rest of the evening, which ran more than four hours, was a little more serious than Hennig and Brisco, but just as heartfelt.

Edge Adam Copeland was called upon to introduce his partner Phoenix: “If I don’t get this right, I’m going to get my ass kicked in the hotel room tonight.” He praised her desire to be a pro wrestler and take a chance: “She wasn’t a model, she wasn’t a diva, she was a wrestler.” 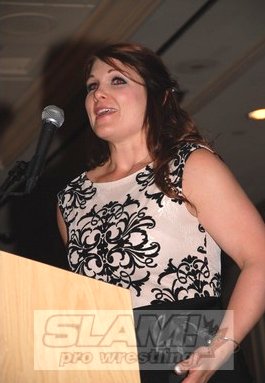 “Ladies and gentlemen, I give you the Glamamom,” concluded Copeland, getting a kiss, and a promise of fresh-baked cookies for the rest of his life for the nice introduction, calling him now “the Rated C is for Cookie Superstar.”

Phoenix admitted she was a bit nervous. “I wanted you guys to be proud of me more than anything else,” she said to the audience full of legends, and her family and her extended family, the Copeland.

“It literally takes an army to build a wrestler, and some of them wear camouflage,” said Phoenix, saying hi to Sgt. Slaughter at a nearby table. She talked about her learning curve and some of her influences. In particular, Molly Holly (Nora Greenwald) was singled out for believing in her, including making the first payment on Phoenix’s training in Ohio Valley Wrestling.

Naturally, Phoenix talked a bit about Gail Kim too, as both had trained in part under Toronto’s Ron Hutchison.

Presenting Kim, Hutchison talked first about Gail Kim being a Toronto SUNshine Girl, and that’s how he found her and invited her to train to be a pro wrestler. “She definitely had the It Factor,” said Hutchison, who got in touch with the photographer at the newspaper to contact Kim. Hutchison still made her write up a one-page essay to enter. “Both male and female, she was the quickest learner that ever walked into our gym,” he said. Kim was out wrestling within six months. 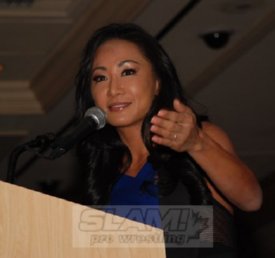 “Thanks for embarrassing me,” teased Kim. She thanked foes such as Traci Brooks (who was also a SUNShine Girl), Beth Phoenix, Awesome Kong, Malia Hosaka and Molly Holly, as well as the big two promotions she worked for, WWE and TNA. “The Knockouts Division was basically created overnight,” she explained, and was kickstarted by her handing in her resignation out of frustration from not getting to wrestle in TNA.

Closing out the event, CAC President Brian Blair promised big things for next year, and announced that Paul Orndorff, Abdullah the Butcher, the High Flyers (Greg Gagne & Jim Brunzell) would be honored, and that the first Charlie Smith Referee Award would be presented for the first time.

On Tuesday night, at the more informal Baloney Blowout — now renamed the Bockwinkel Blowout — a number of other presentations to made: Lisa Marie Varon, Len “The Grappler” Denton, Bruiser Brody, Christopher Daniels, Malia Hosaka, Sinn Bodhi, Jimmy “The Mouth of the South” Hart. As well, Wes Brisco was given the Future Legend Award, Terry Funk was handed a Reel Award for his movie and TV work, and Diamond Dallas Page received the Jason Sanderson Humanitarian.