In one night, an award and a rib for Wes Brisco

LAS VEGAS — It worked out OK. But for a time it appeared that Wes Brisco was going to be MIA for his big moment at the Cauliflower Alley Club reunion.

The second-generation wrestler already had plans for the night, never suspecting he would be announced as the Future Legend Award winner during the club’s April 14 Bockwinkel Blowout. 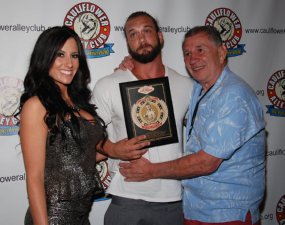 “I wasn’t going to come. I have a bunch of friends who live out here. I was going to hang out with them,” Brisco said. “I hadn’t seen them in a while, so I was going to skip out.”

Cue event planners, who wanted to be sure the son of WWE Hall of Famer Gerald Brisco was present when his name was called.

Morgan Dollar, the club’s executive vice president, worked with wrestling friend and organizer Emily Miller to try to woo Brisco to the ceremony.

The plot was simple: Tell Wes that he had to be in the crowd because his dad was in line for special recognition, in addition to the Lou Thesz Lifetime Achievement Award he would receive the next night. Sssh … it was all hush-hush, Dollar and Miller explained.

Initially, Brisco initially balked at the suggestion. “The guy gets a lot of awards,” he protested. “But they’re like, ‘No! No! It’s a special one.’ So, I said, ‘All right.’ ”

As he rode the escalator to the event, he encountered Dollar at the top and corralled him. “Do I have to speak?” he asked Dollar, who innocently countered, “Only if you want to. It’s up to you.”

“It was a rib but a good rib,” Dollar later laughed.

Imagine Brisco’s surprise. He was idly checking his cell phone for messages when he heard his name ring out throughout the ballroom at the Gold Coast Hotel & Casino as the Future Legend Award winner.

“It was out of the blue. I had no idea at all,” he said. “It means the world to me. It’s good to see that people notice your hard work. That’s what this is all about—hard work and putting in the time.”

A few feet away, Gerald had trouble looking up through misty eyes. On stage, his son was not exactly a figure of stoicism either.

“I couldn’t even look at him. He was tearing up so bad. He’s dealt with my struggles; he’s dealt with everything I’ve had to deal with,” Brisco said.

Brisco has had a rocky start to his career, but said he has adopted a never-say-die mentality passed on from his dad and his late uncle Jack, who was National Wrestling Alliance world champion from 1973 to 1975.

Brisco hooked on with WWE’s Florida development territory in 2009 and wrestled until his release in 2011. He wrestled in Puerto Rico before joining TNA in October 2012. He feuded with the Aces & Eights heel gang until he turned bad guy and aligned himself with the faction.

After his TNA stint expired in 2014, Brisco wrestled for New Japan Pro Wrestling and challenged Satoshi Kojima for the NWA world championship. But he said he won’t be satisfied until he is in the WWE, competing for championships.

“I’ve been able to keep going. I just look to the next opportunity,” he said. “A lot of people, once they’re told ‘no,’ they give up. I never gave up. If you have a dream, follow that dream. There’s always going to be setbacks but you can overcome these setbacks.”