Plenty to do at the CAC reunion

LAS VEGAS — There was no shortage of things to do on Monday at the Cauliflower Alley Club reunion, both run by the club and other things trying to capitalize on all the wrestling fans in town. Some were healthy, like the Diamond Dallas Page yoga session, while some had a decidedly more lewd feel.

Another “off-shore” thing was a VIP session with Jake “The Snake” Roberts and Sinn Bohdi (Kizarny in WWE) down the road at the Hooters casino, but at $50 for a VIP ticket and $30 for a regular ticket, word is it didn’t draw a ton.

Definitely a different kind of fan went on the second annual Cheetah Run, which was an organized shuttle ride to and from Cheetah’s, an infamous strip club in town where Charles Wright, a.k.a. The Godfather and Papa Shango, works.

The hospitality room, though, is still the key part to the reunion. Besides a place to check-in and register, there are cribbage games going on, lots of wrestlers, authors and promotions selling their gimmicks, and all kinds of neat memorabilia and collectables.

It’s also the place for the reunions of old friends, so it’s a pretty magical place to sit and watch sometimes as people come into the room, see someone they recognize and react accordingly.

On both Sunday and Monday nights there were live pro wrestling shows in the ballroom featuring wrestlers of all shapes and sizes, ages, and experience. Truthfully, it was a fairly typical indy show in that there were too many matches — 12 on Monday alone — with too many wrestlers, and because everybody seems to want to get their spots in, it all ends up meaning less than it could have as a team effort. I do understand that it’s a chance to shine in front of some legends.

And sometimes those legends can’t resist getting into the act. One of the weirdest moments for sure was Kevin Sullivan, the Taskmaster himself, coming out to ringside in a Kabuki mask, motioning around, but not really getting involved in the match. 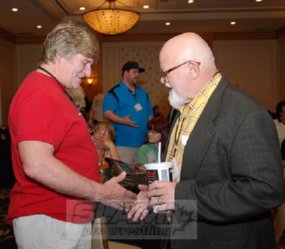 Some of the neat moments I saw on Monday’s show — my flight was too late so I missed Sunday’s event — included country music legend Kris Kristopherson at ringside watching his son, Jody, wrestle. How WWE couldn’t have found a way to use Jody is beyond me … Jushin “Thunder” Liger dropped the NWA Light Heavyweight title to Steve Anthony in a bit of a screwjob finish that furthered storylines between the NWA, led by president Bruce Tharpe, and New Japan Pro Wrestling … There was a pretty entertaining four-way bout with the women, which included NWA Women’s champ Santana Garrett, former champ Barbi Hayden, a big, imposing centurian I’d never seen before in Andrea, and La Rosa Negra, who should definitely be on the One To Watch in 2015 list. … There was a presentation to this year’s inductees to the NWA Hall of Fame as well.

NOTES: One of the cool things available this year is a 50th anniversary CAC Converse shoe, with images of some of the honourees on it. There is also an option to add your own photo to the shoe for an extra $10. It’s a print-on-demand type deal. There is also a planned shoe for the 2015 induction class at the Pro Wrestling Hall of Fame.