NWA World title book worth its weight in gold

It’s page 14, and I’m already deeply sucked into Ten Pounds of Gold, the wonderful historical book about the NWA World Championship title worn by the likes of Jack Brisco, Harley Race, Terry Funk and Ric Flair. Quite honestly, not being a belt mark, I didn’t think a belt would hold my attention for an entire volume … but it did, and then some. 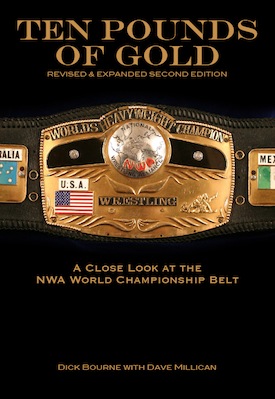 In many ways, Ten Pounds of Gold, written by Dick Bourne with beltmaker Dave Millican, is a love letter to championship belts, ones that have deep meaning and stand for something. The belt doesn’t spin or light up, but instead it represents greatness and the pinnacle on the professional wrestling profession.

The copy of Ten Pounds of Gold came into my hands through Millican, who I helped hook up with the original WWWF World title, which had been stashed in the late “Handsome” Johnny Barend’s attic, wrapped in a towel. [See Original WWWF title found in attic.] I enjoyed my brief time holding the WWWF World title, in its purgatory between owners, and dreaming of the men who had worn it to the ring, especially strutting like “Nature Boy” Buddy Rogers and being loved like the iconic Bruno Sammartino.So I took home Ten Pounds of Gold on a real belt “high”, and maybe that affected my thoughts when reading it. But maybe not.

It must be said that this is the “Revised & Expanded Second Edition,” which follows the original publication of Ten Pounds of Gold in 2009, as a full-colour epic.

The newer version, streamlined and black and white, with some added material, is still pretty damn impressive. The very existence of the first edition really moots my major complaint about the second one — that I wanted to see more of it in colour.

Ten Pounds of Gold takes readers from the early genesis of the belt, who created it (in Mexico), and when it came into the public’s eye. It was surprising to learn about its twisted path through the years, the three versions of it that existed, primarily with the leather changing. There is a look at each and every man to have held the title.

The details you learn in its 150 or so pages are a fascinating, though all the answers to “why” aren’t always there. 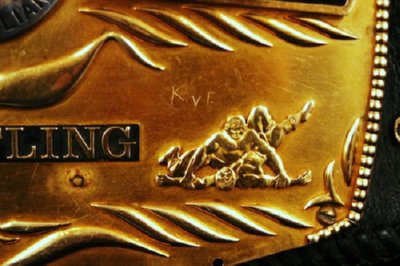 Here are Kerry Von Erich’s initials scratched into the belt, along with a bonus story from author Dick Bourne: “At the 2009 NWA Legends Fanfest in Charlotte, a fan who had bought the book asked Ric Flair during a Q&A about the KVE being scratched into the belt. Ric told the poor guy he was nuts, that it wasn’t true and if it was on there, he’d know about it since he had the belt. About an hour later when Ric and Harley Race were doing photo ops with the belt (like the one seen in the book), this same fan pointed it out to Ric. He seemed really surprised, and apologized to the guy for being so dismissive in the Q&A. It was kind of an interesting moment. He had just never noticed it, even after all those years later. It really is hard to see unless you know where to look and hold it in the right light.”

Perhaps you had never noticed that Kerry Von Erich had etched his initials on the front gold belt plate, for example.

Or that the flag for Canada isn’t the current Maple Leaf, but an earlier version with the Union Jack top left. Given that the belt was created at least seven years after Canada had adopted its red and white flag, it is certainly a puzzling aspect of history that the writers are unable to reveal completely.

While many men have held the belt, it is Harley Race and Ric Flair that stand above and beyond.

It is Flair that owns the actual title and allowed Bourne (who runs the Mid-Atlantic Gateway website with David Chappell) and Millican (who makes title belts — DaveMillicanBelts.com) a day with the title belt, to go over and photograph each and every detail from multiple angles.

But it is Race’s contributions of old photos and clippings that go above and beyond, really making Ten Pounds of Gold a wonderful side volume to his rather light autobiography, King of the Ring, which came out in 2004.

Would Jack Brisco and Shohei Baba have contributed as well had they still been around? I’d like to think so.

There’s just so much history that has been captured in its pages that I am really in awe and appreciative of the authors’ efforts.

I somehow doubt anyone will be doing anything similar in 2040 about the spinner WWE title.